We love a quirky wedding venue, almost as much as we enjoy a challenge. Clapton County Club is certainly one of London’s great alternative wedding spaces, and perfectly complemented the vibe and values of D & M. 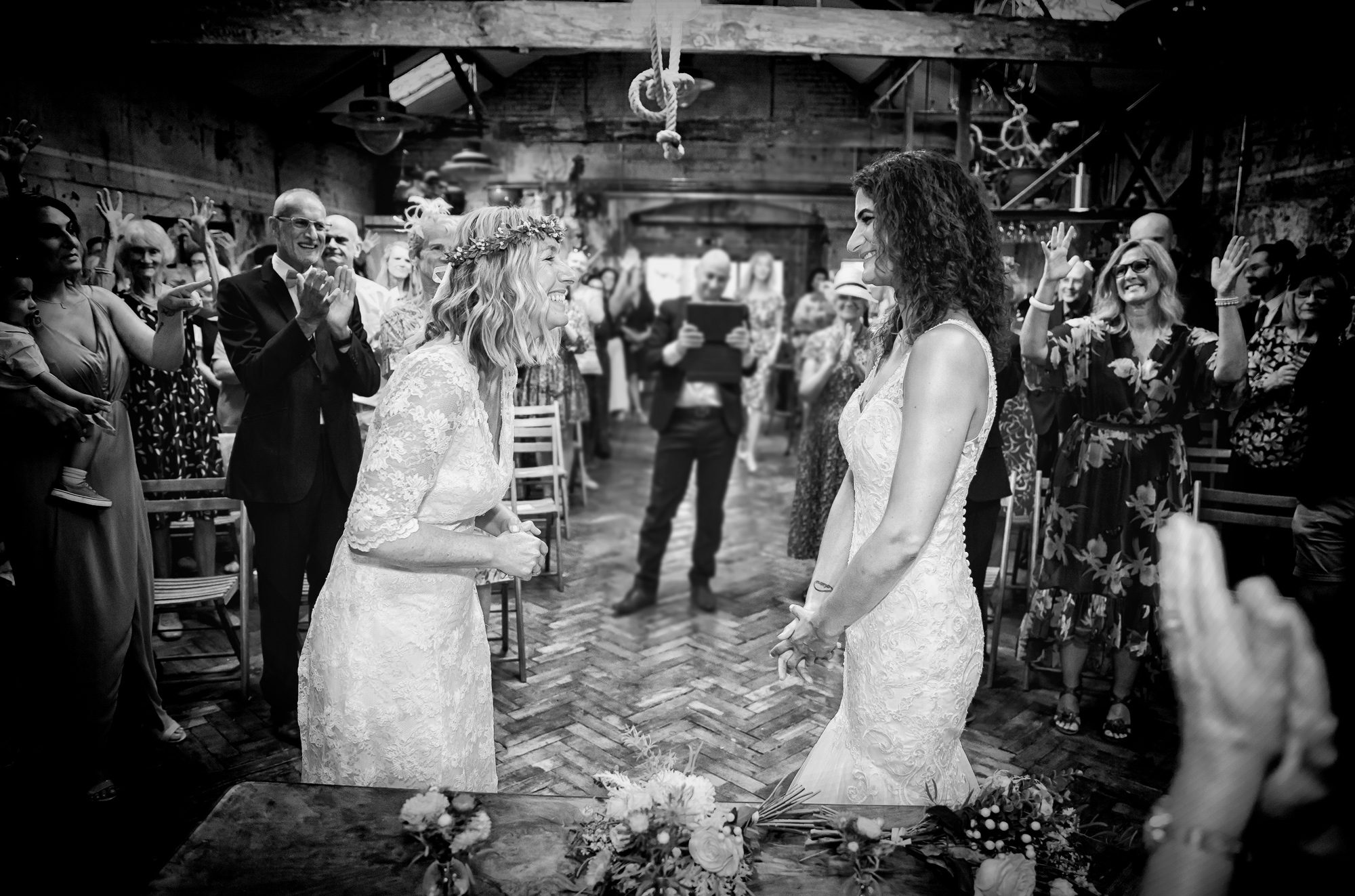 Clapton Country Club used to be a tram depot and all throughout its different spaces there’s was evidence of its former role. D & M told us they wanted photographers experienced with urban and quirky weddings and plenty of creativity when we originally spoke, and we were delighted to give them exactly what they wanted and then some 🙂 Not your home counties stately home big day for these guys! 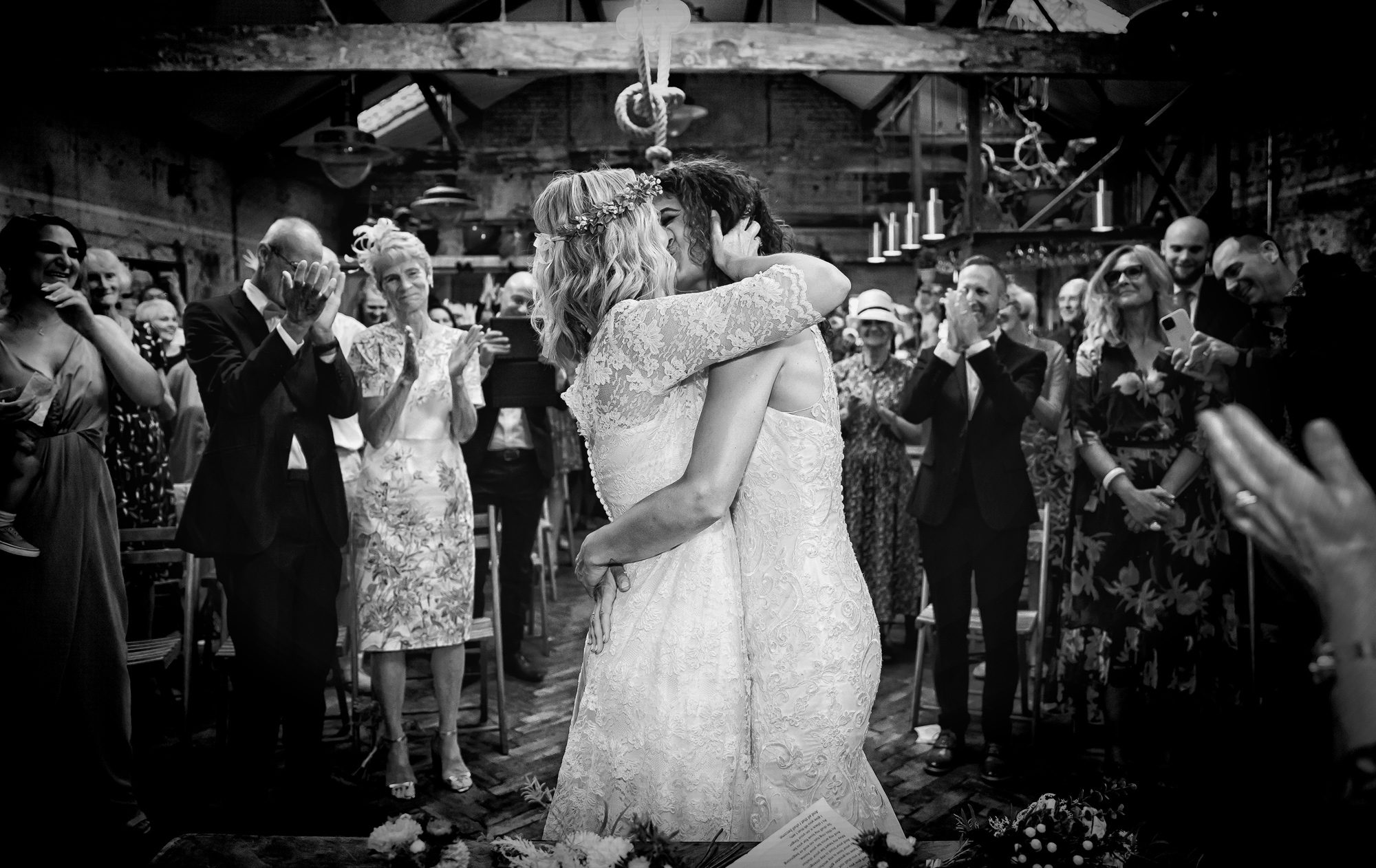 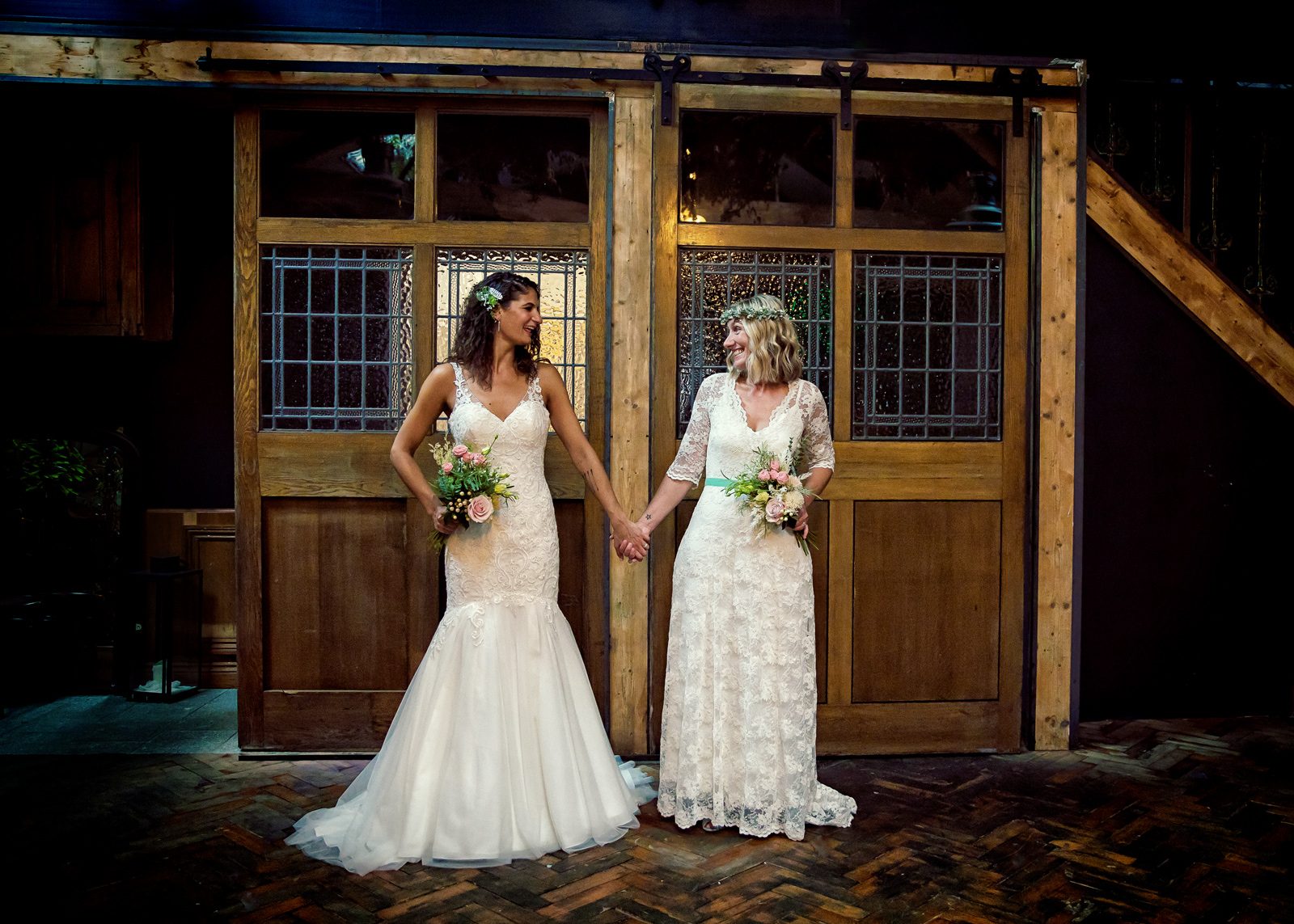 David had built a rapport with both through zoom and a very enjoyable engagement shoot in Shoreditch central London. Here’s a link to that shoot: Shoreditch Engagement Shoot, inner London photography 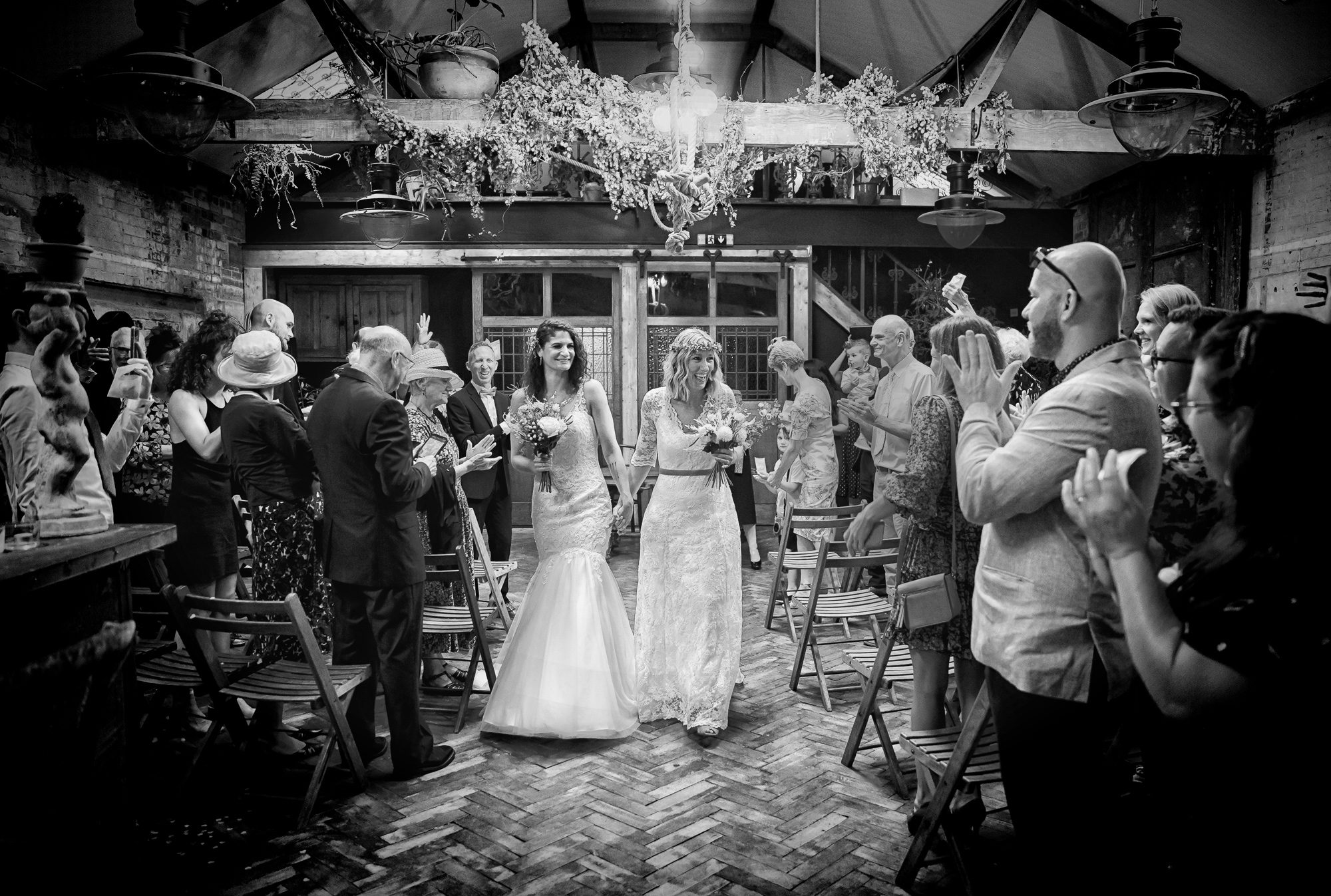 A new challenge for us as photographers was the fact that both brides were deaf and so were ninety percent of the wedding guests plus the two videographers. 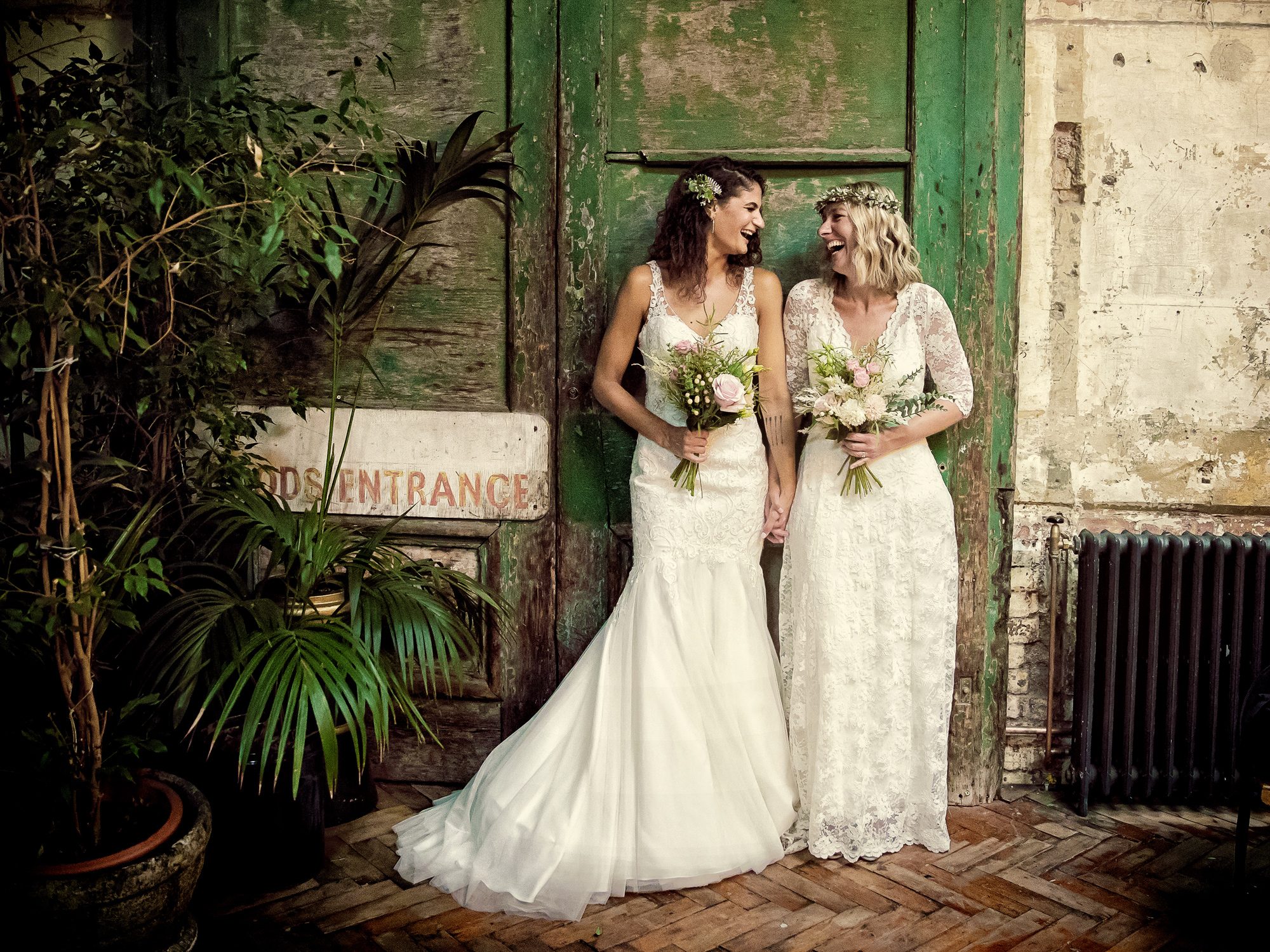 In truth, through communicating through a bit of universal sign language and skilled lip-reading on D & M’s behalf made everything a pleasure. In fact, I for one (David) hardly thought about it throughout the day and it ultimately made no difference whatsoever, which is of course how it should be! 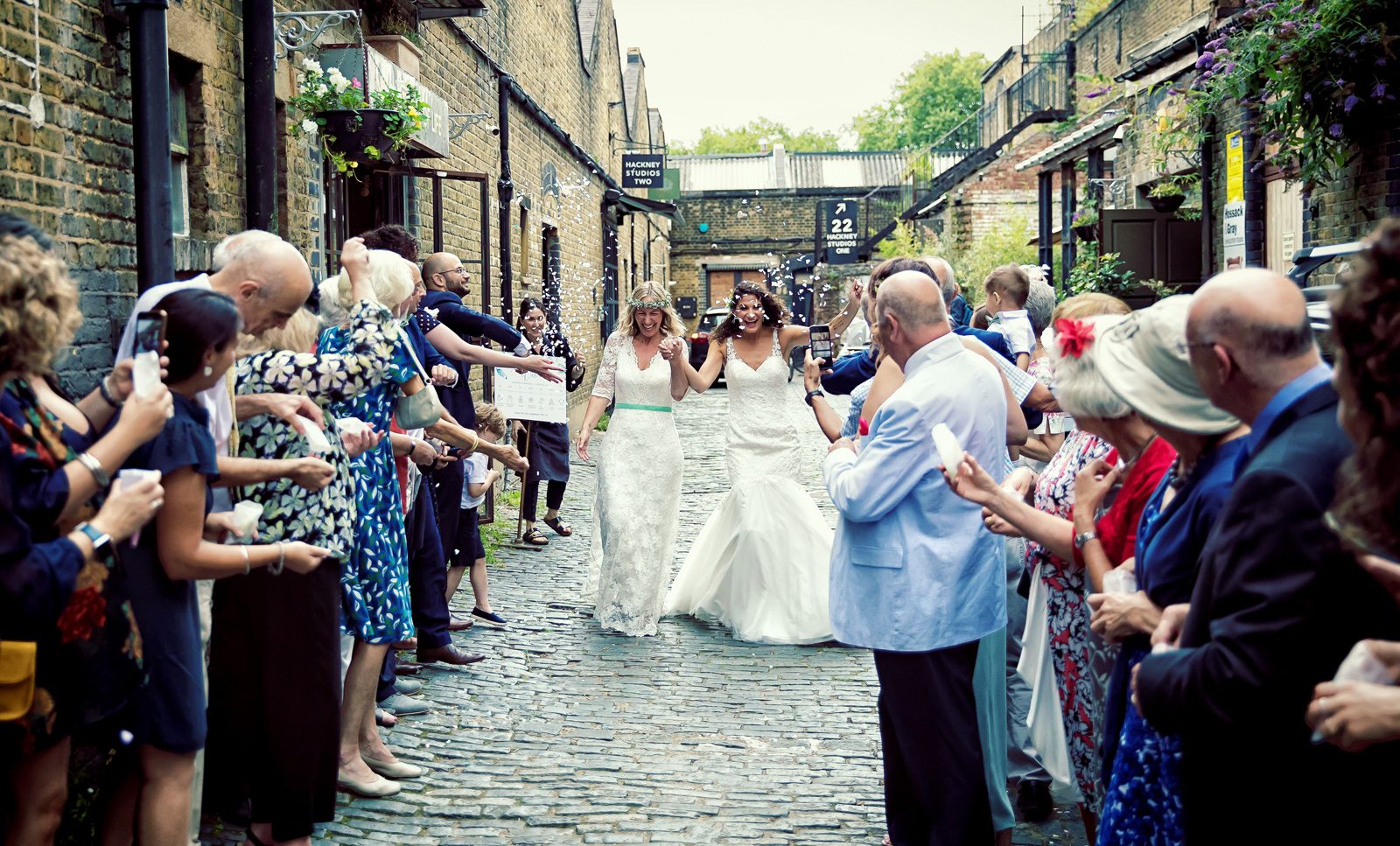 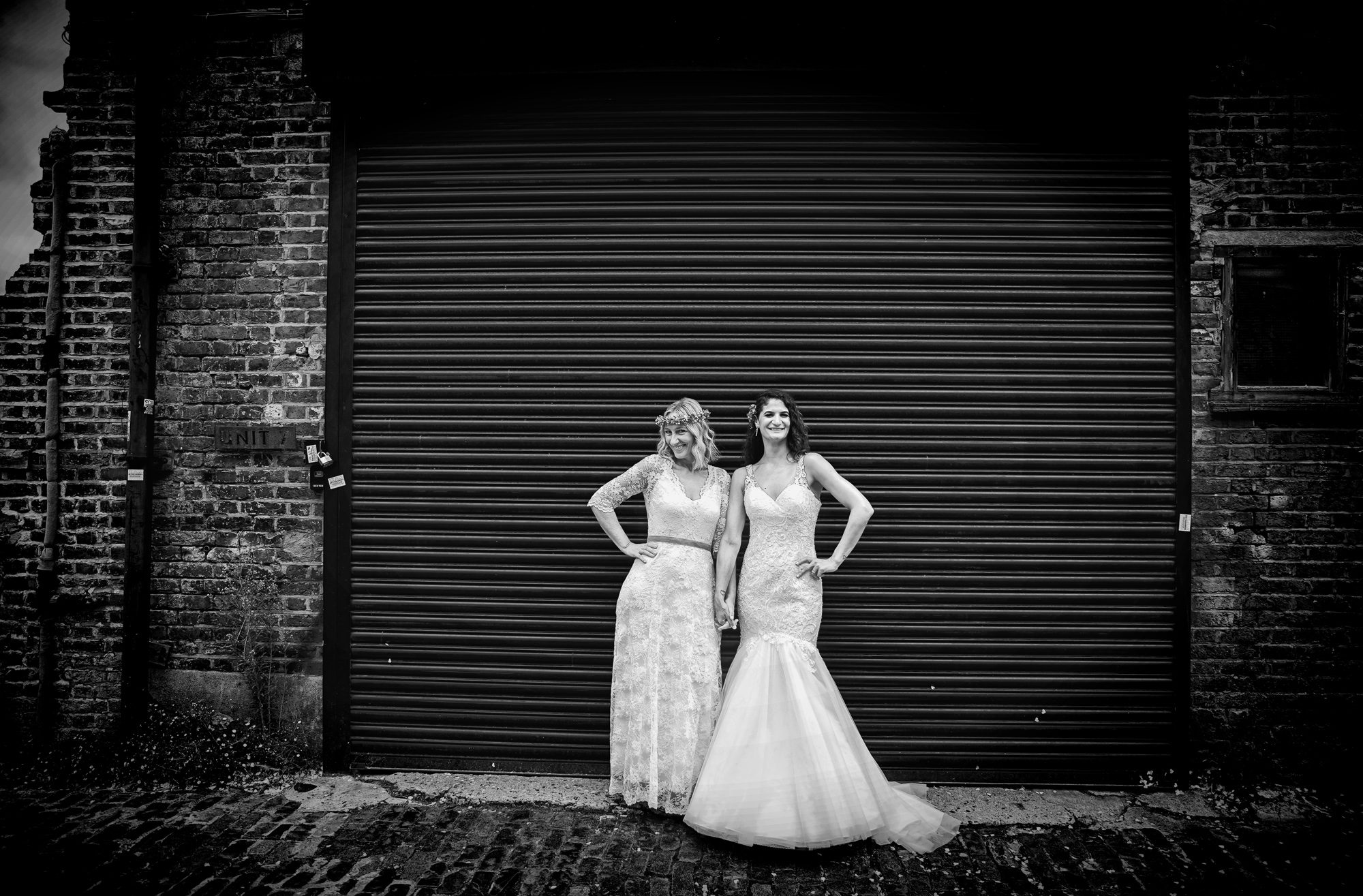 Our day started with both brides getting ready in a lovely hired Airbnb loft space five minutes away from the venue. 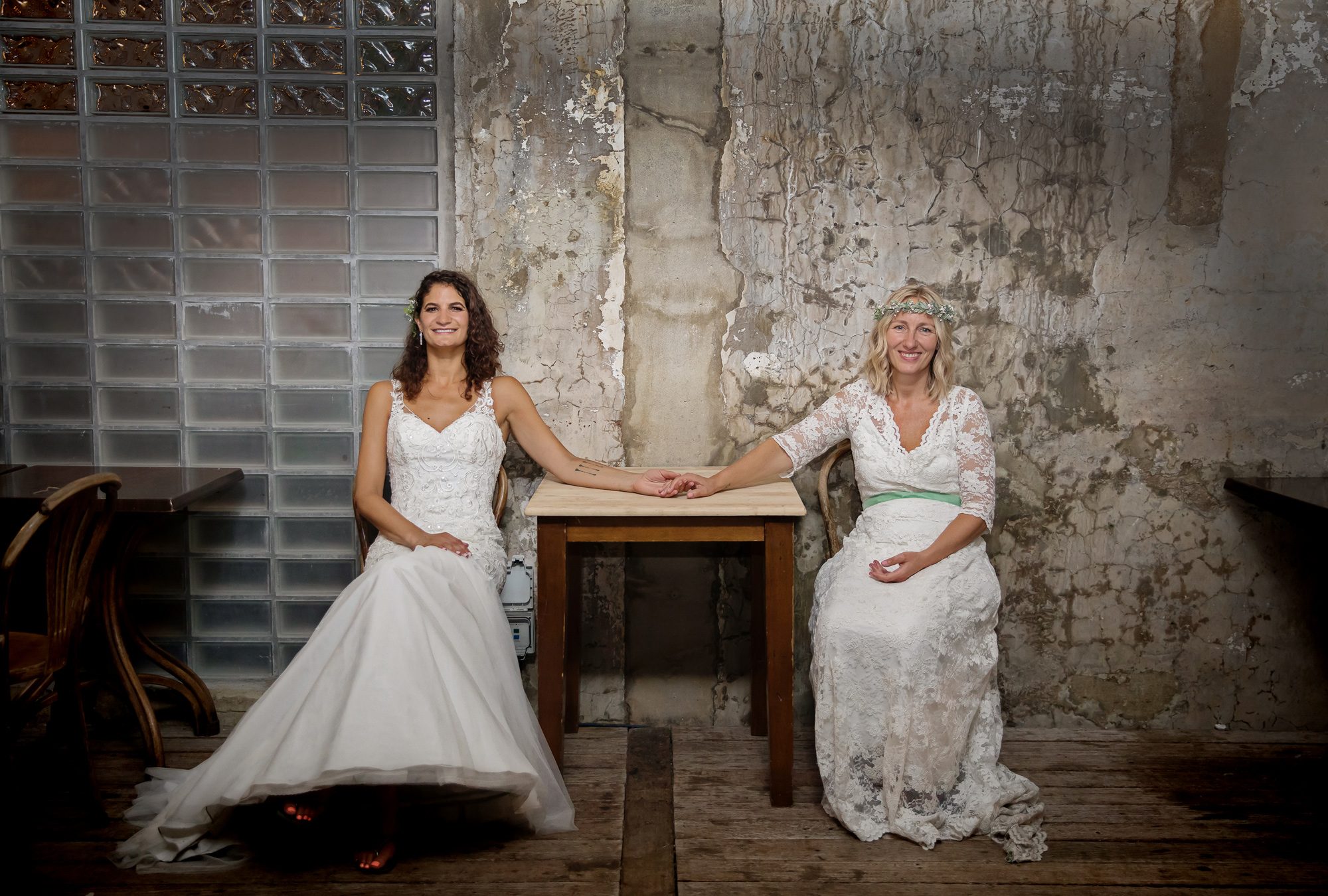 A swift walk with cameras and equipment through the streets of Clapton lead us to the Country Club to get some establishing shots and into the wonderfully titled “Department of Life” which is used for wedding ceremonies. 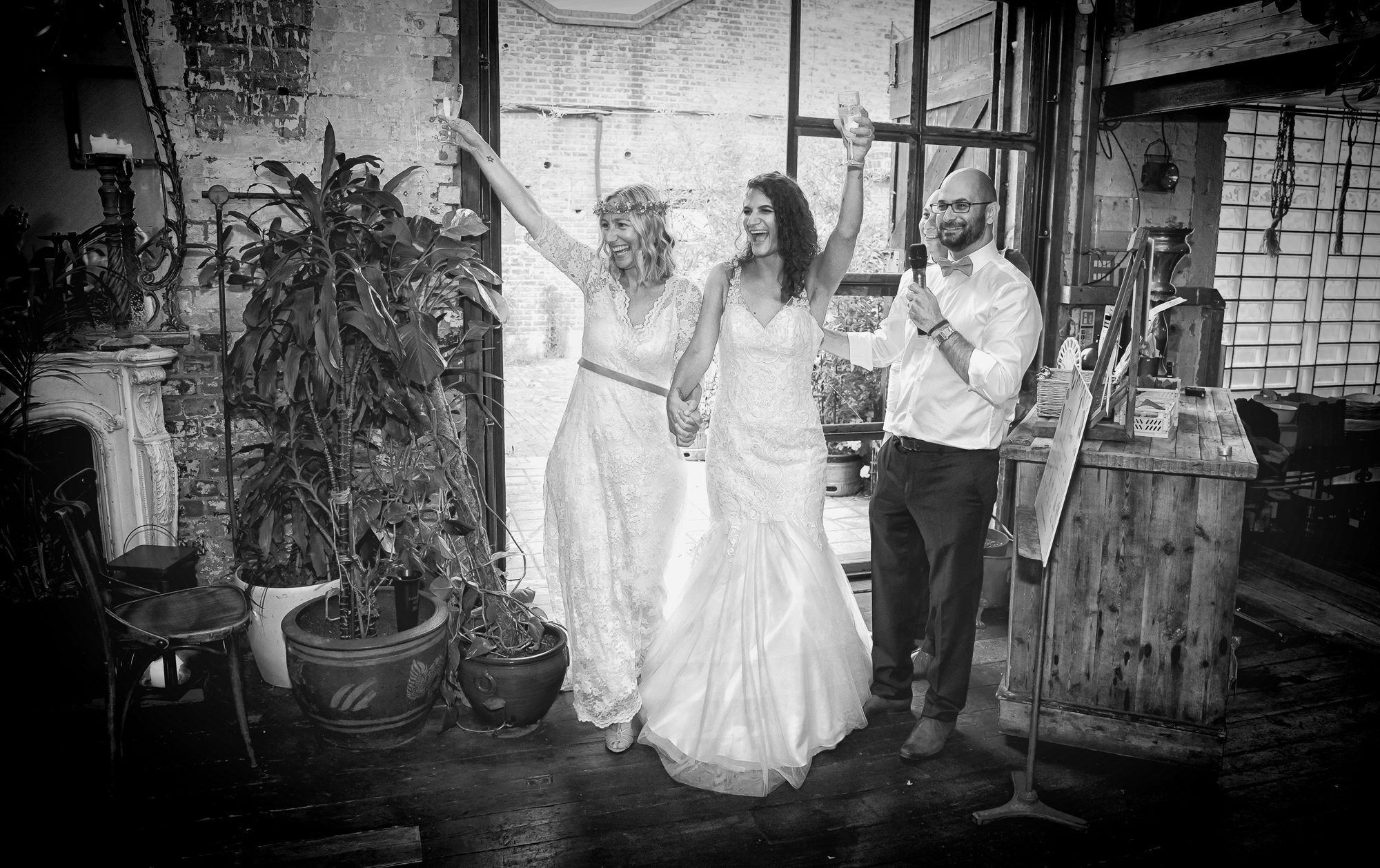 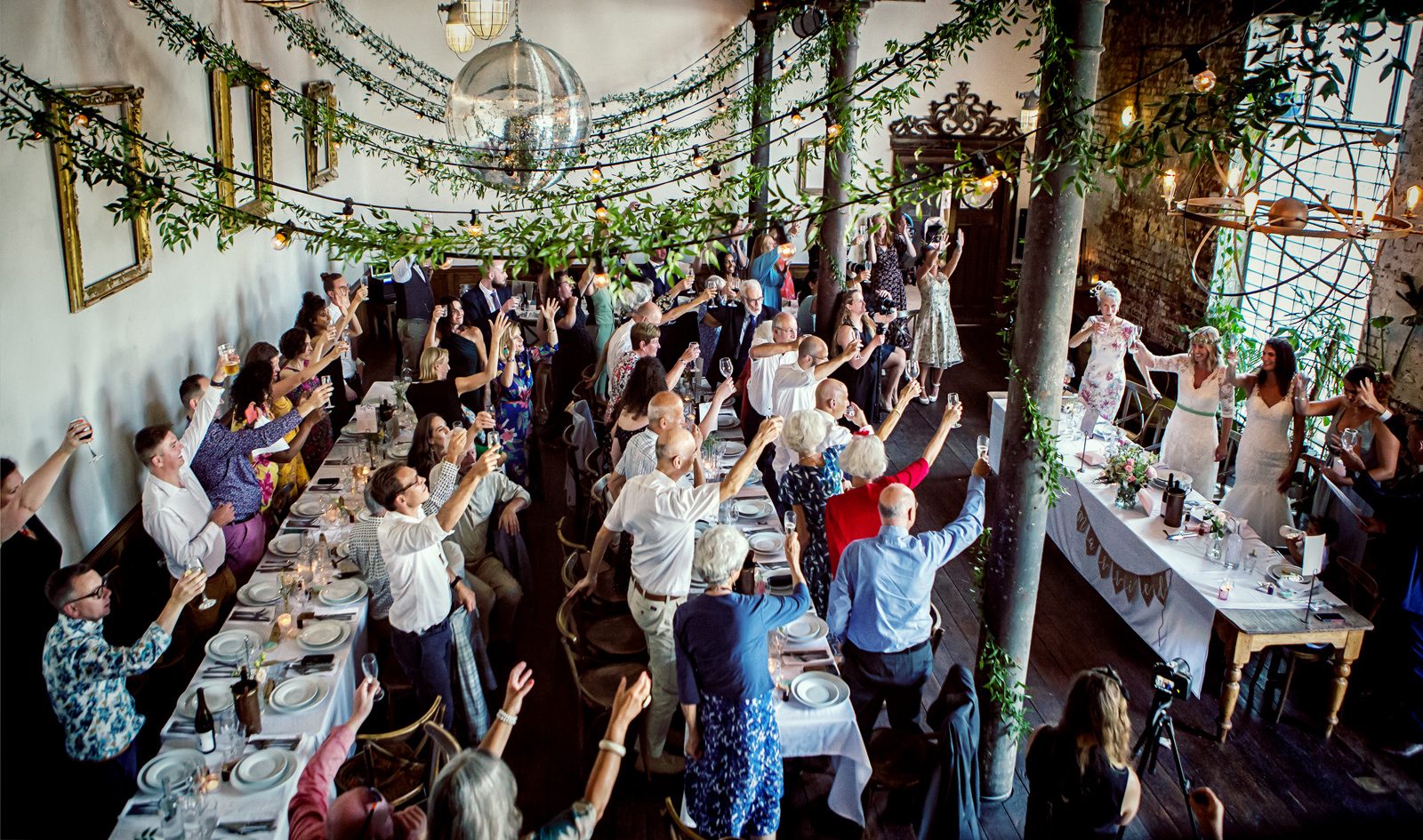 A great ceremony followed with sign language interpreters so everyone totally understood, including D & M, what was being said by the registrars, interspersed with much love and laughter. 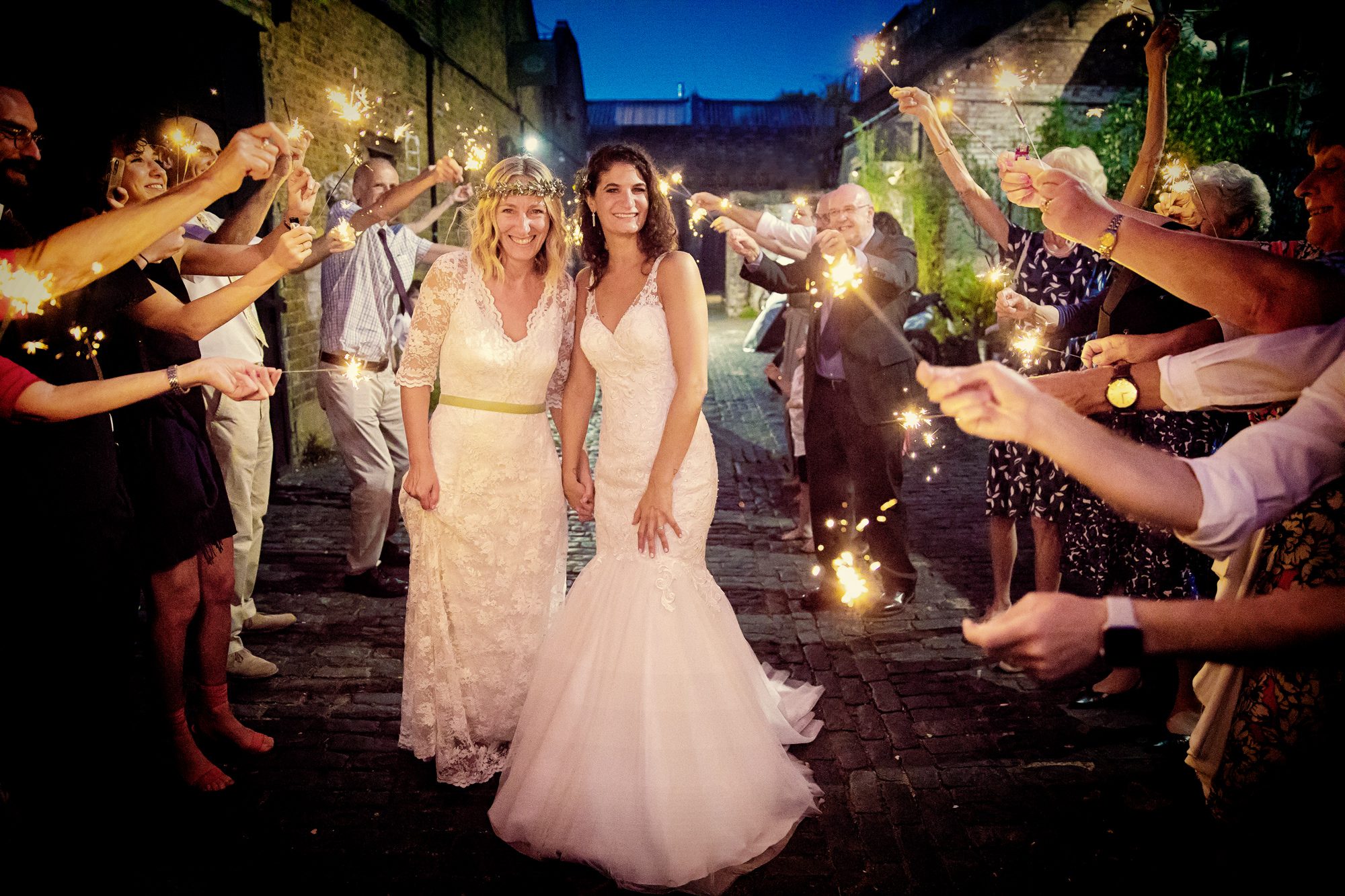 When the big deed was finished and that magical first kiss as married partners was done, we had a little time around the venue during the drinks reception to get some couple shots before some more structured pics of friends and family.

The Country Club’s largest internal area is called…wait for it…Clapton Country Club! In this chic industrial space D & M had their reception. It’s also used for ceremonies too if there’s more people than the Department of Life can hold, or the couple favour it.

We’ve put an image of it shot from the balcony to give a sense of this excellent space.

Food, speeches, laughter and then a lovely first dance where D & M romantically signed the words to each other, set the tone for the rest of a fabulous evening. Congratulations to the both of you, and thank you Clapton Country Club for your hospitality and professionalism throughout the day!!! 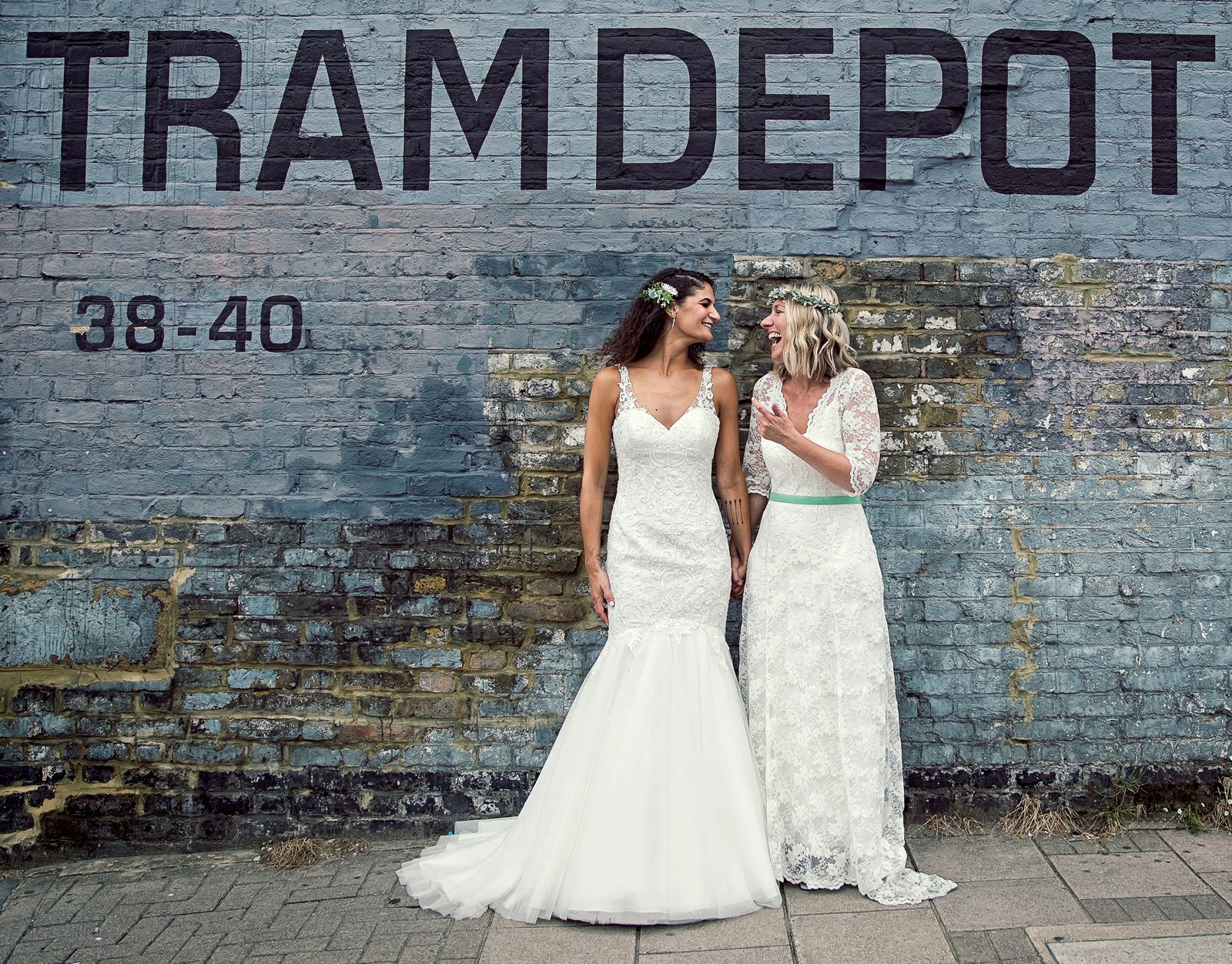