Another great Islington Town Hall Wedding, then on to Hoxley & Porter and The Albion 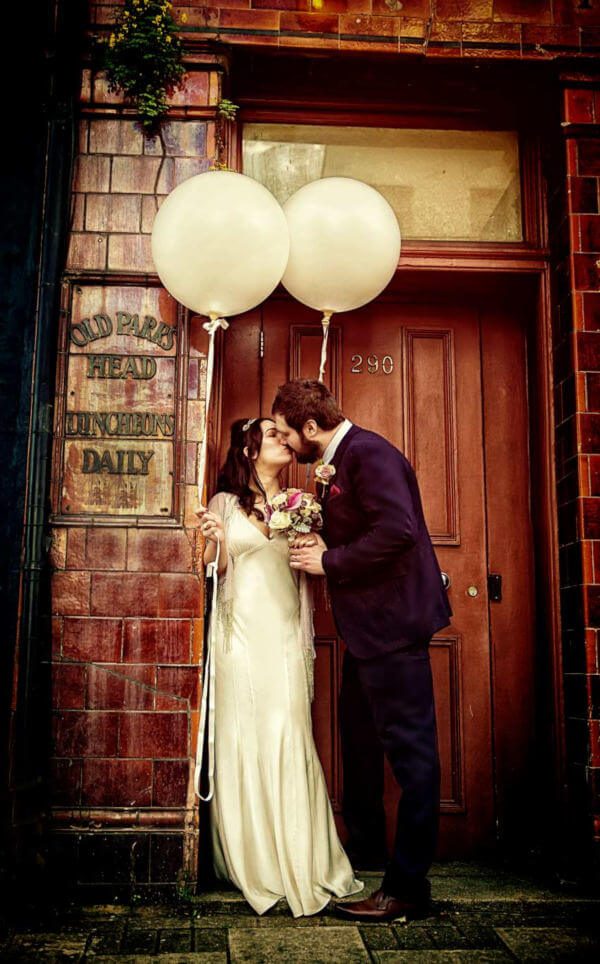 Sometimes but not always for a smaller and more intimate wedding just one of us will photograph the special day. Usually that’s myself, David, while Joanna has a day off! I really enjoyed working with and photographing the thirteen people involved in this great Islington Town Hall wedding. 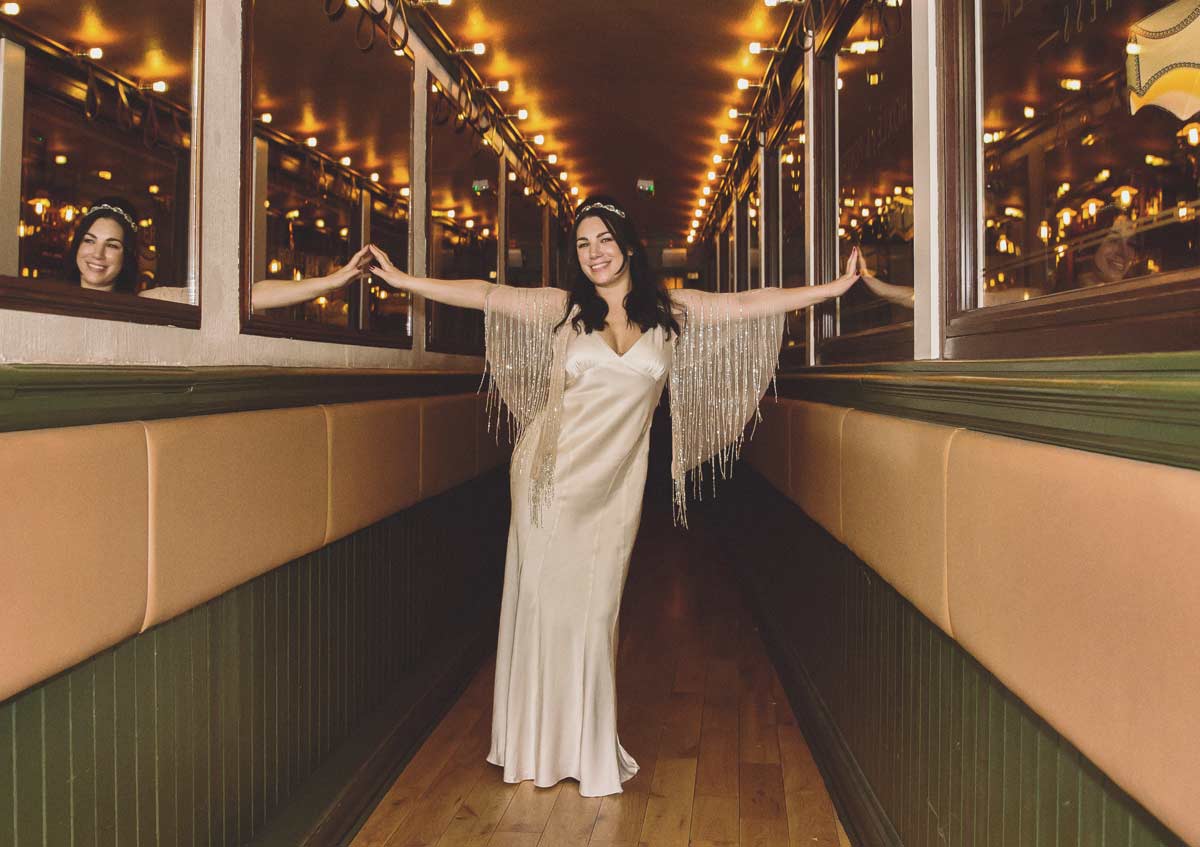 Francesca and Stuart the bride and groom had communicated with me only via email, which happens occasionally, as we usually try and meet people face to face at some point before the big day. However it’s not always possible, and it’s certainly not a necessity. 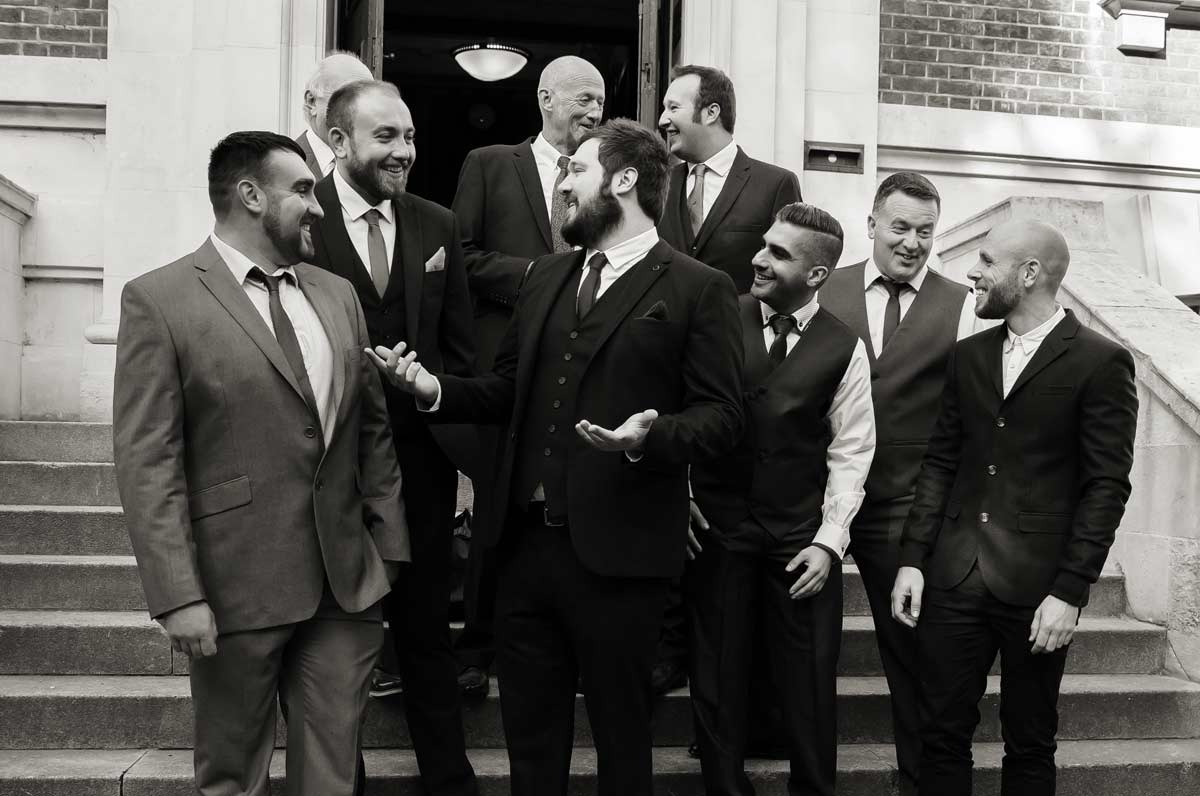 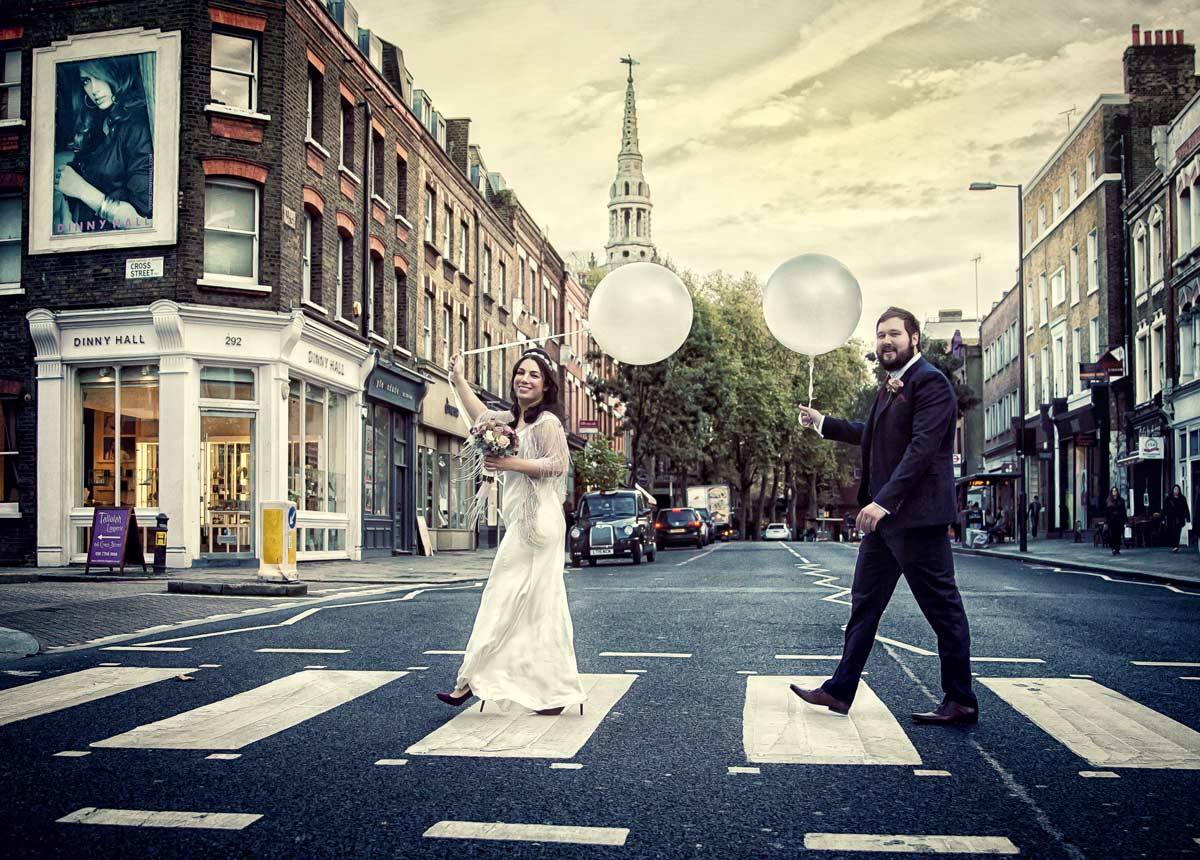 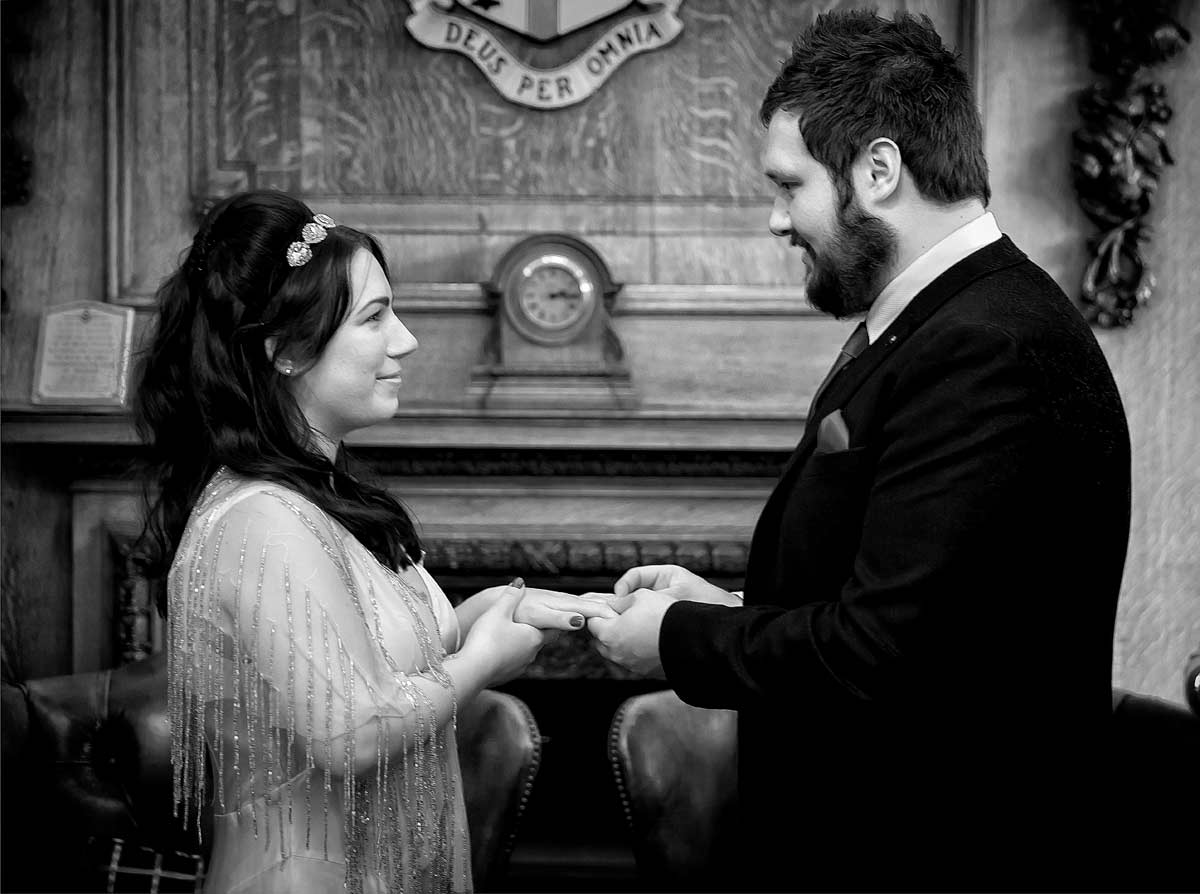 What that meant was the first photographs I would take would be the first time I had seen either of these good people. The minute I saw Stu walking towards the Town Hall with his groomsmen, with a broad grin on his face when I waved to him, I knew we would all get on well. It was the same feeling I had when I saw Francesca arrive in her London wedding taxi. 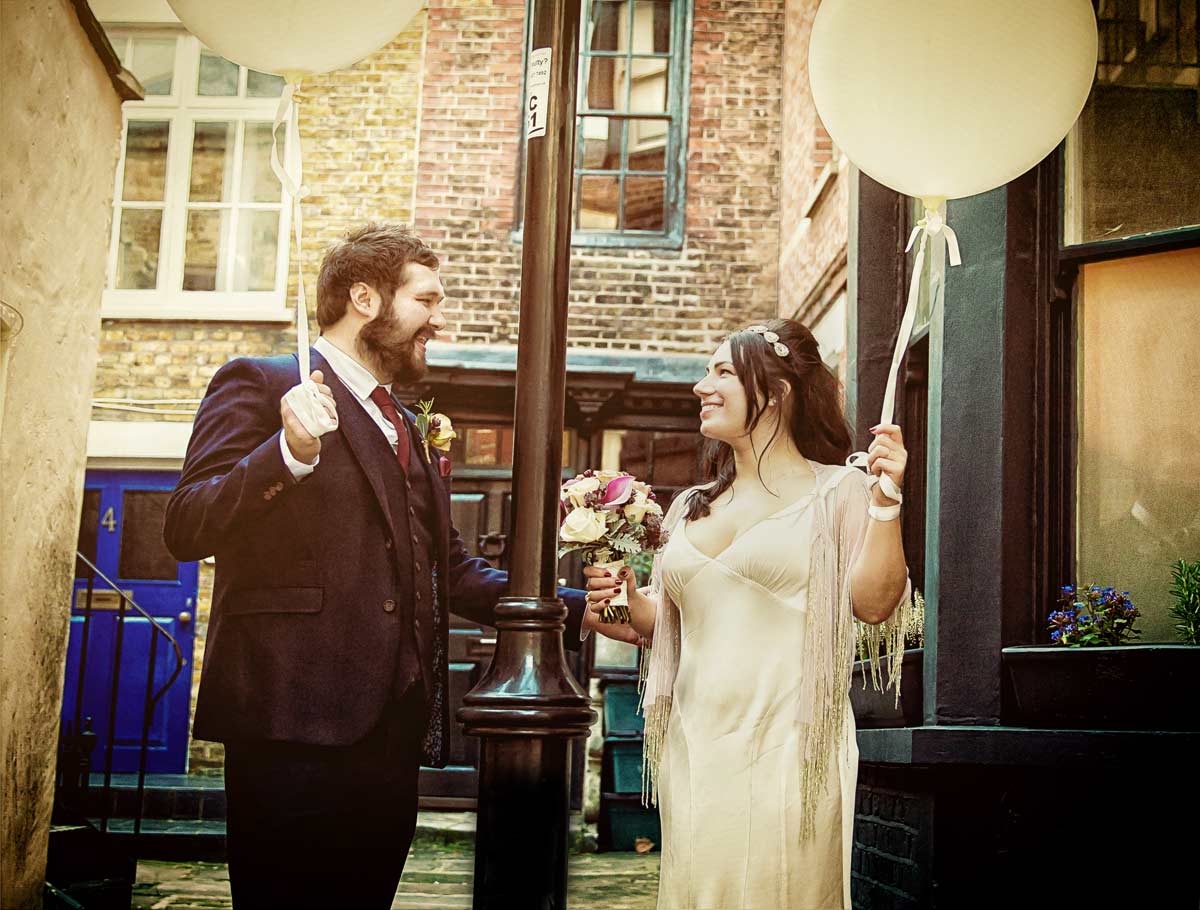 Unusually for a wedding at Islington Town Hall we all had to access the building from an entrance on a side street. That day (it was a Tuesday) Kate Middleton the Princess of Cambridge was also visiting the building at the same time for a charity engagement. Although I tried to walk through the front entrance and question Kate on why she didn’t book us for the Royal wedding, security and MI5 agents were having non of it! We all imagined and hoped for a scenario where Kate would mistakenly walk through the wrong door into the wedding ceremony, then we could either politely chuck her out, or invite her for an impromptu snap with the couple. 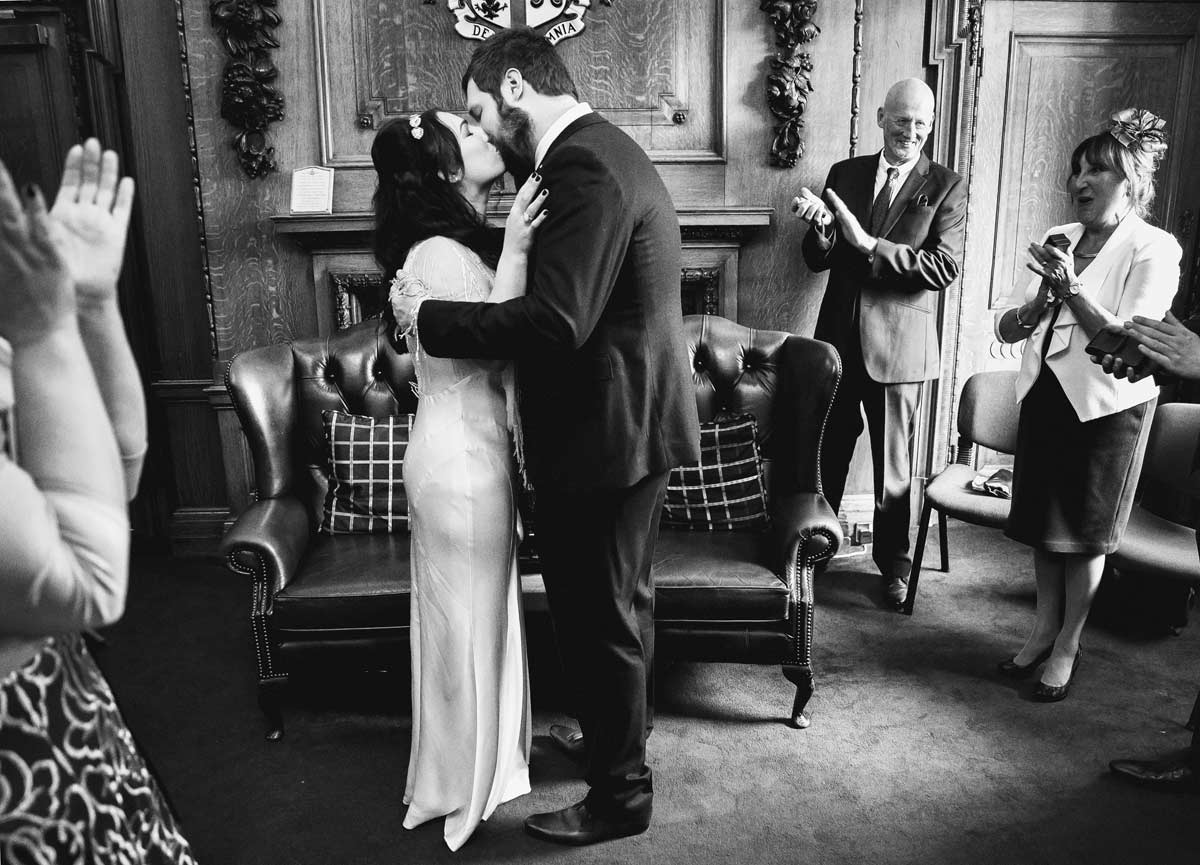 As this was a celebration for Francesca and Stu with closest friends and family, the wedding ceremony itself was held in the Lord Mayors Parlour, one of my favourite wood panelled rooms in Islington. It felt a privilege to document such a love filled and intimate ceremony. Afterwards everyone made sure the couple were absolutely showered in confetti, I know, I was picking it out of Stu’s hair hours later! By this time though, both Elvis and Kate Middleton had left the building… 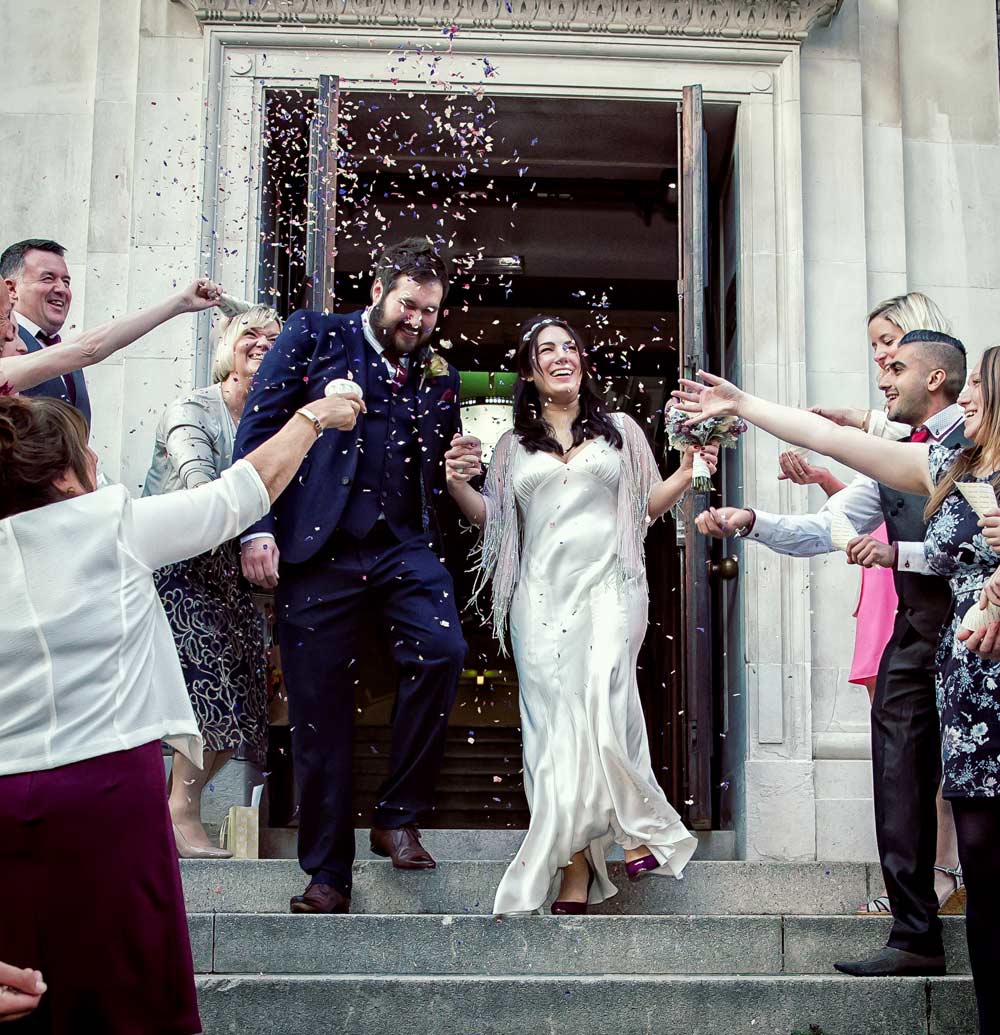 We all walked together the short distance to their first reception venue the atmospheric Hoxley and Porter on Upper Street. Now as I remember this place used to be called the Grand Union Bar when I lived nearby, and with it’s bowed out front window it is a very recognisable part of Upper Street’s history. 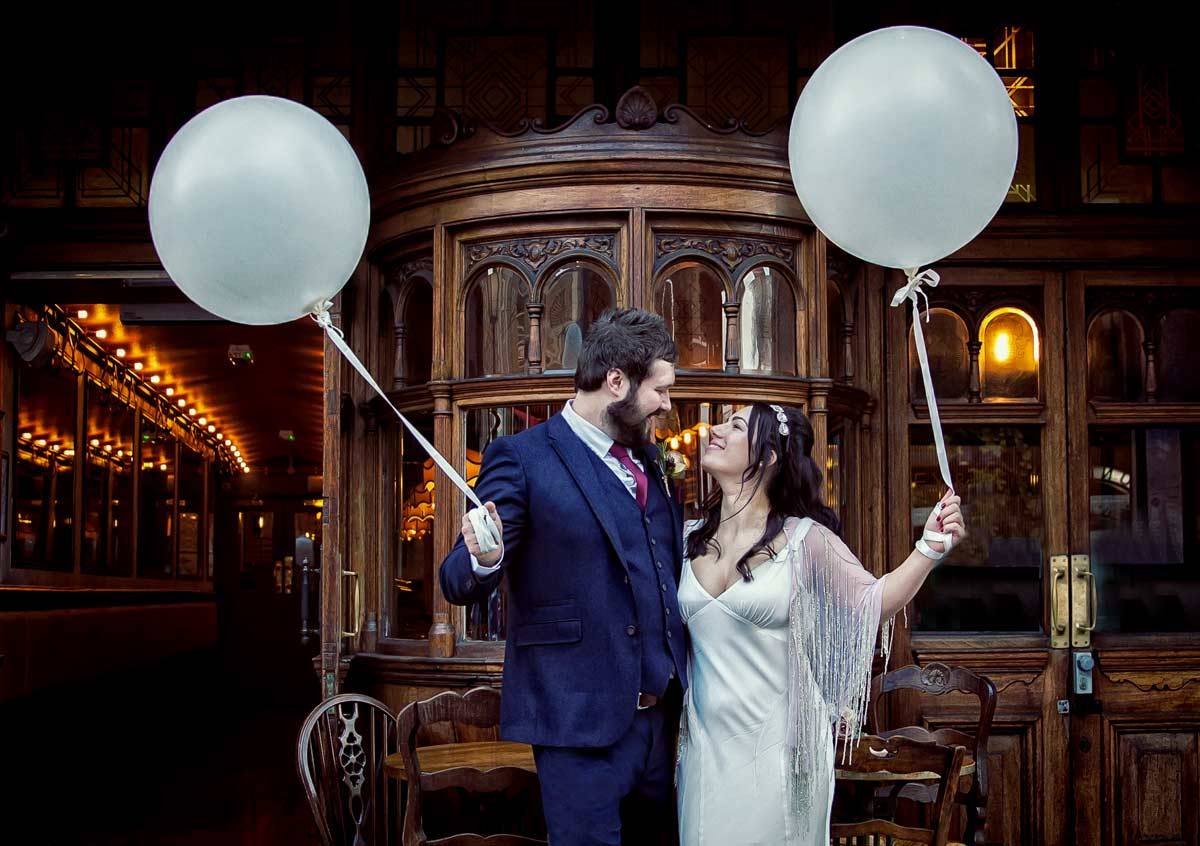 It’s undergone a fantastic transformation for Hoxley and Porter into a kind of Orient Express look and ambience, very well done I must say, with fantastically friendly and attentive staff. While the wedding party enjoyed bubbly and nibbles I snuck away with Francesca and Stu for some couple shots around the immediate area of Upper Street. 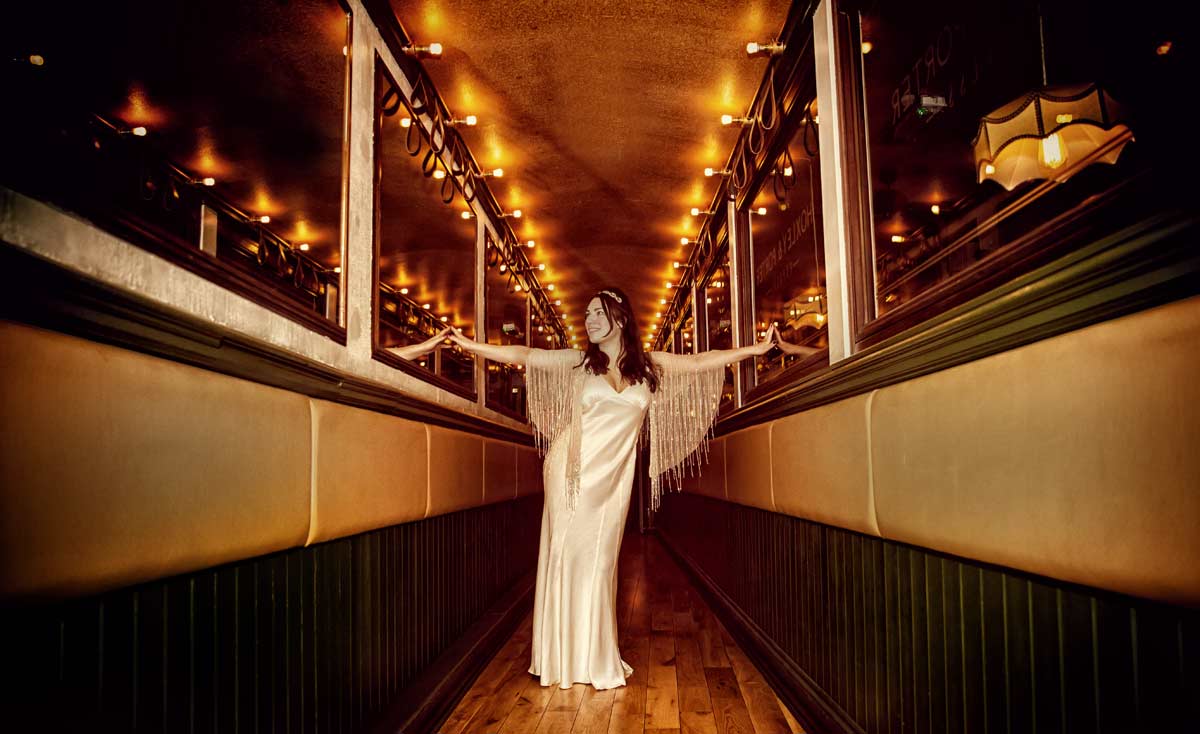 As you can see from some of these shots these guys really loved their balloons, which were also used to designate their special area in Hoxley and Porter. I risked life and limb, as I always do, to get a shot from the middle of the road of them crossing the street near the appropriately named Cross Street. I have quite a few plaster cast art pieces bought from a supplier who is sadly no longer there I noticed as I scanned around for familiar haunts. Not that I would go shopping in the middle of a wedding day! 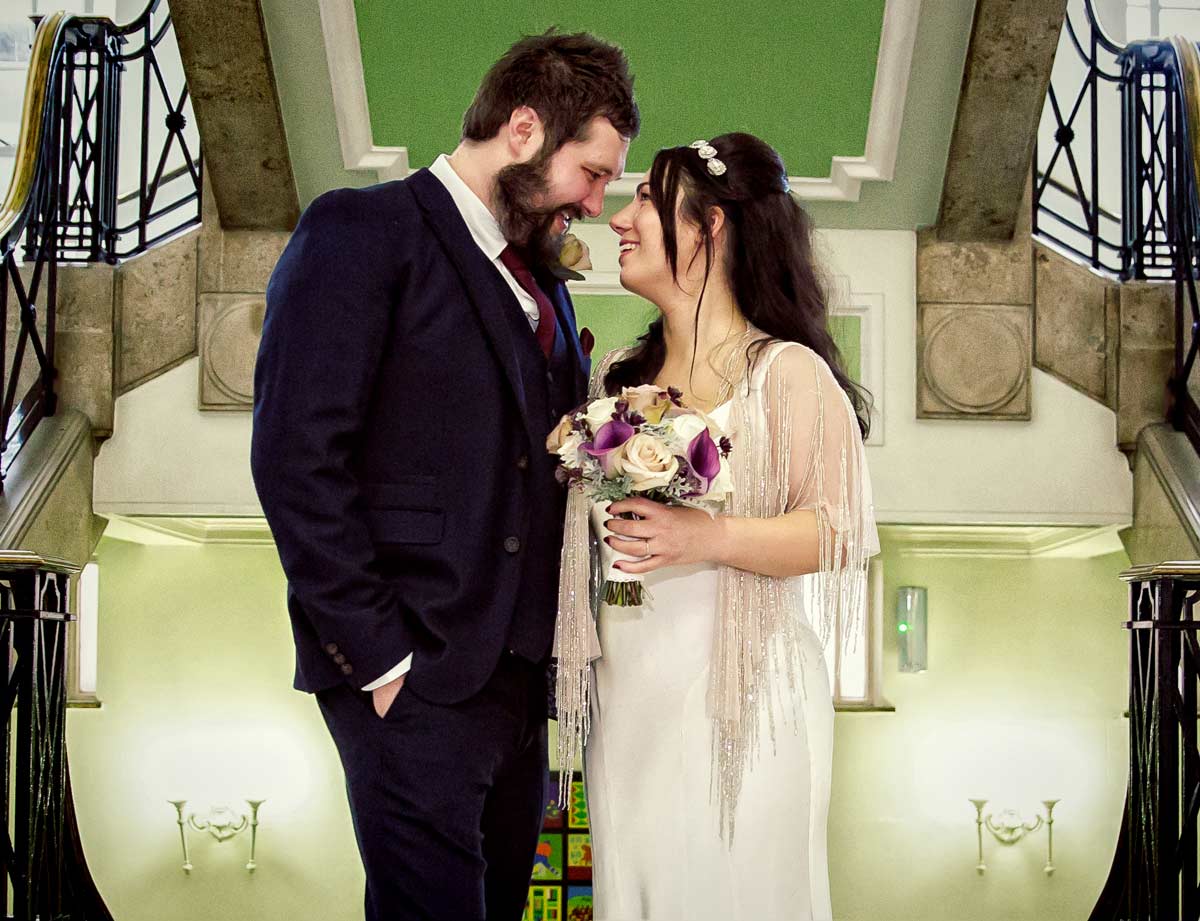 After Hoxley and Porter we all caught cabs to the nearby Albion on Thornhill Road, another gem in Islington from the Georgian era. As it was now dark the Albion was beautifully lit as a venue for their atmospheric second reception. The couple had their wedding cake on display and their evening wedding table ready for the feast and speeches to follow. All I saw was laughter, smiles, love and affection all day long from everyone there, and oh yes…balloons. 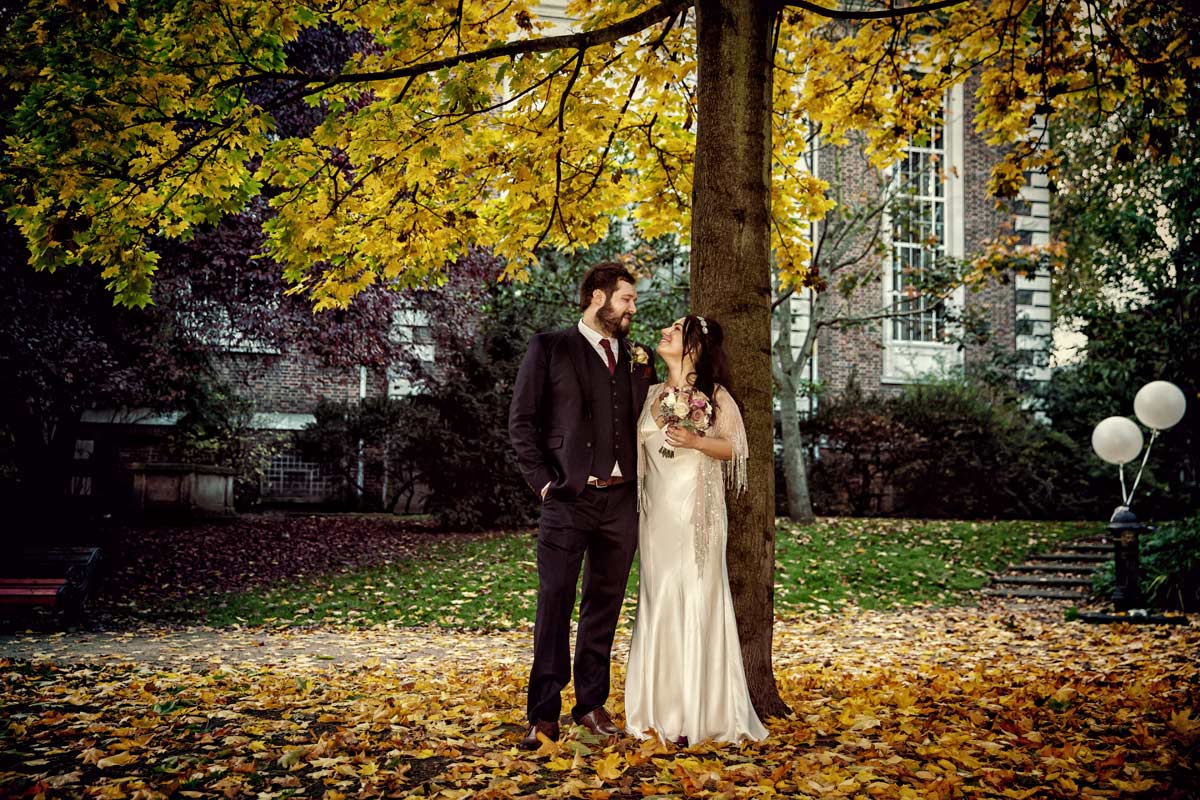 I’ve put a couple of extra images at the end here for two reasons. The first, I love the fact in this particular image below that both bride and groom were both overcome with emotion at the same time, and they simultaneously reached for the hankies. 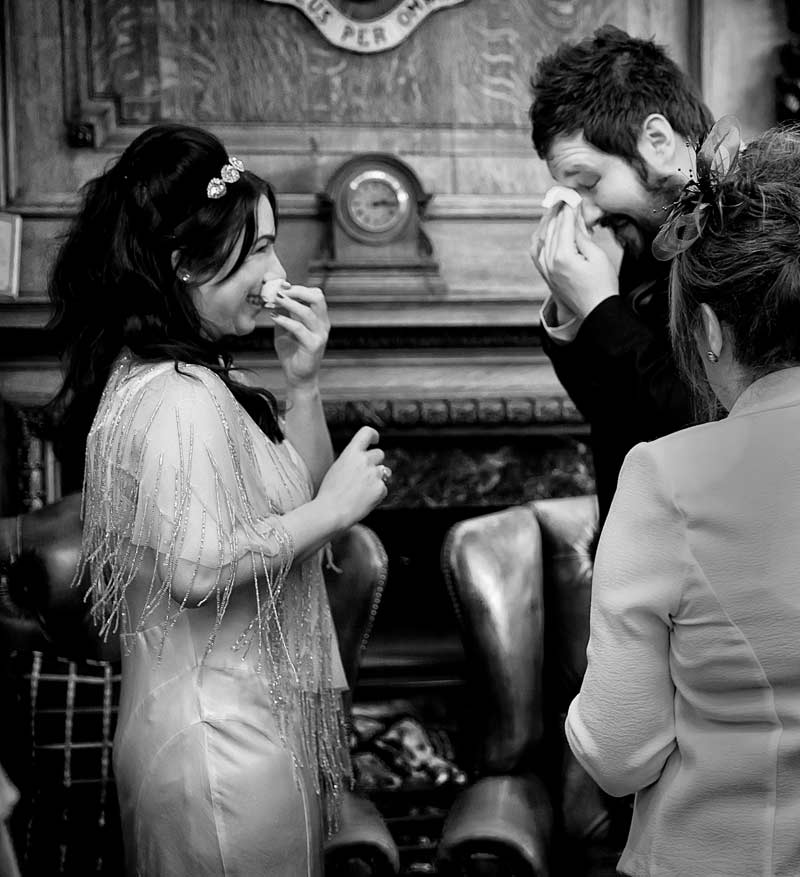 The second is for mirrorless camera lovers, as I decided to quickly experiment with a new toy the Fuji XT1 interchangeable lens camera. I put a prime lens on the 35mm 1.4 as this can literally see in the dark and gives a nice shallow depth of field at an aperture of 1.4. I brought two other main cameras – Canon’s, but it was nice to whip out the Fuji every now and then as it’s small, silent and therefore very discreet. 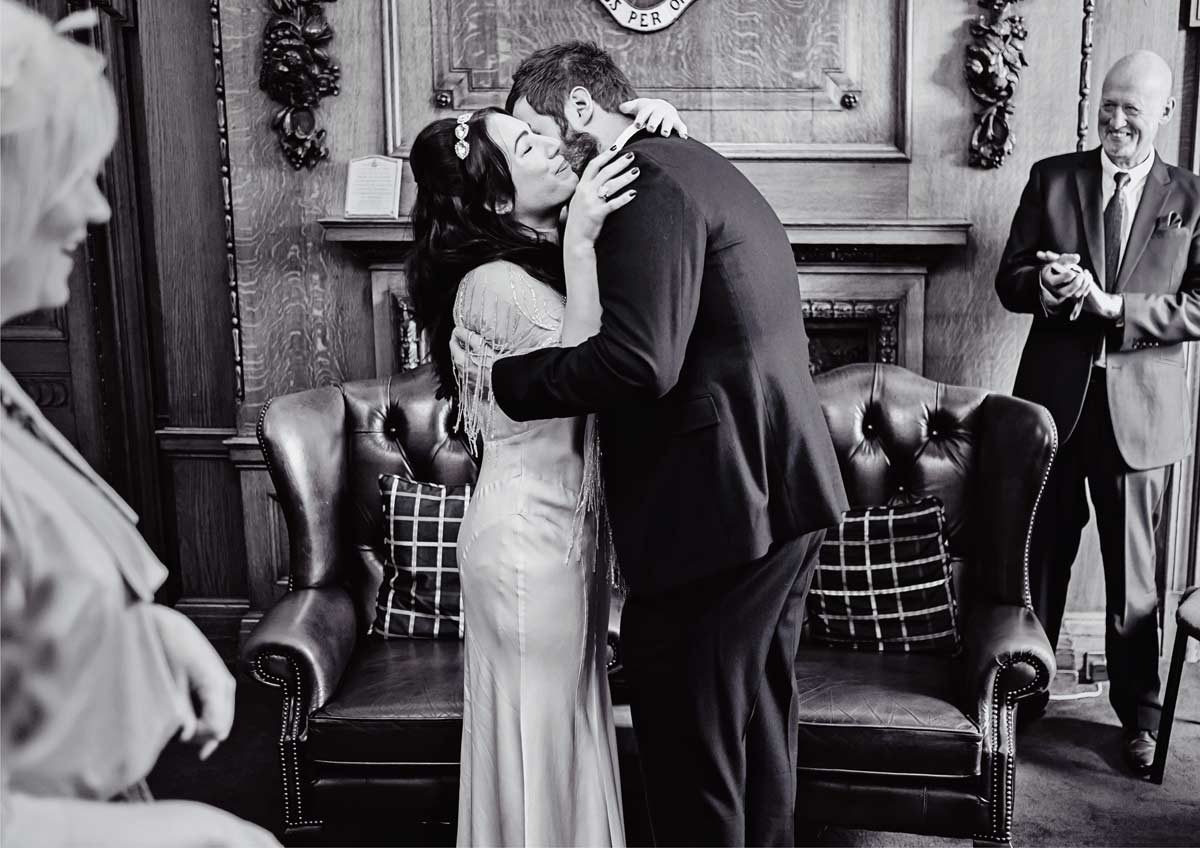 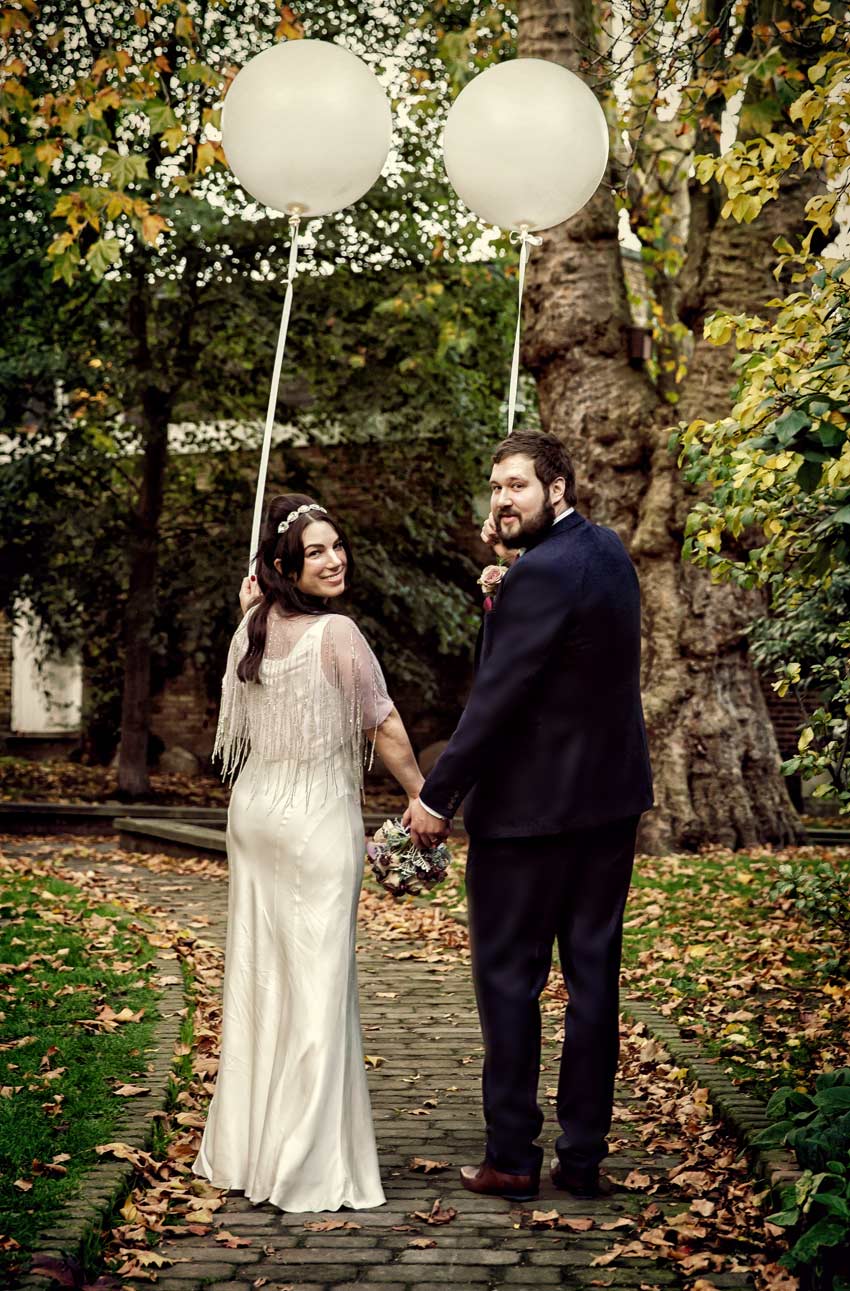 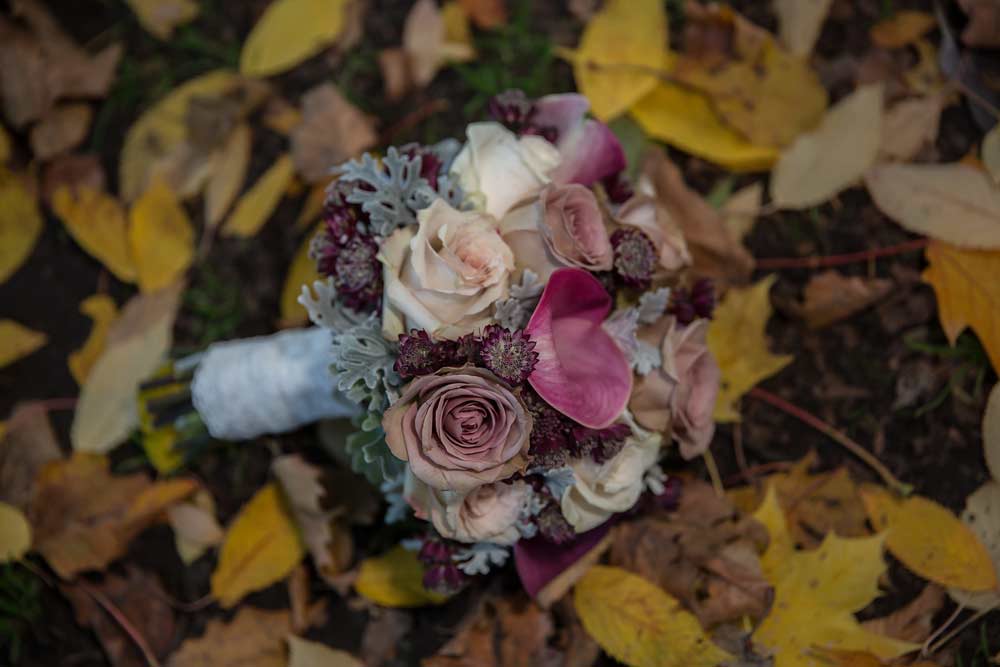 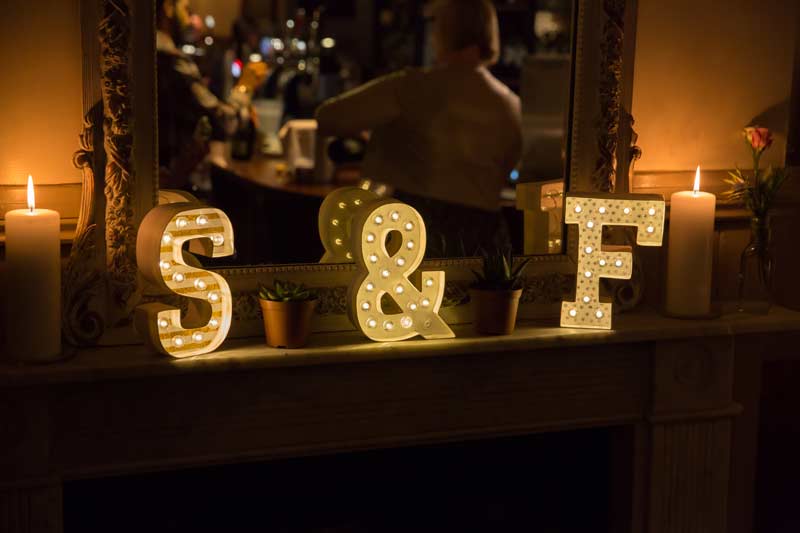 And another from earlier in the year featured on our blog here: Islington Town Hall Wedding

To find out more about the Hoxley and Porter experience you can check out their website here: Hoxley & Porter