It has been one of the great pleasures as wedding photographers to experience many different faiths and outlooks across a tremendous variety of venues. What has also been inspiring is to have witnessed first hand  a sea change in attitudes to same sex marriages. 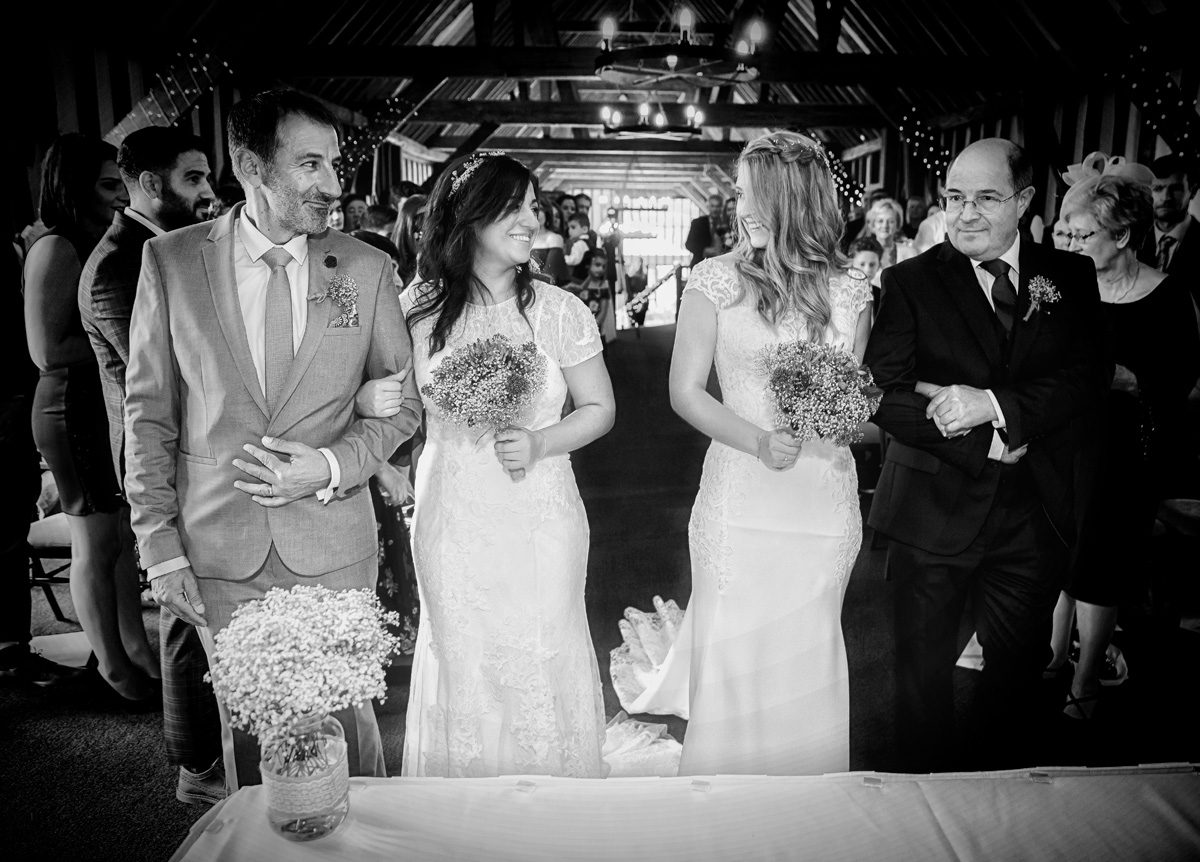 Since 2006 we have been busy with an ever increasing amount of civil partnerships each year, and were also delighted to be the first photographers in a number of London borough’s who were chosen to shoot a so called ‘gay wedding’. We say “so called” because it has always been our attitude that it is a wedding full stop, nothing more nothing less, no need to differentiate. Whether it’s LGBT, or a traditional orthodox religious ceremony it’s the joining of two people who love each other. And what could be better? 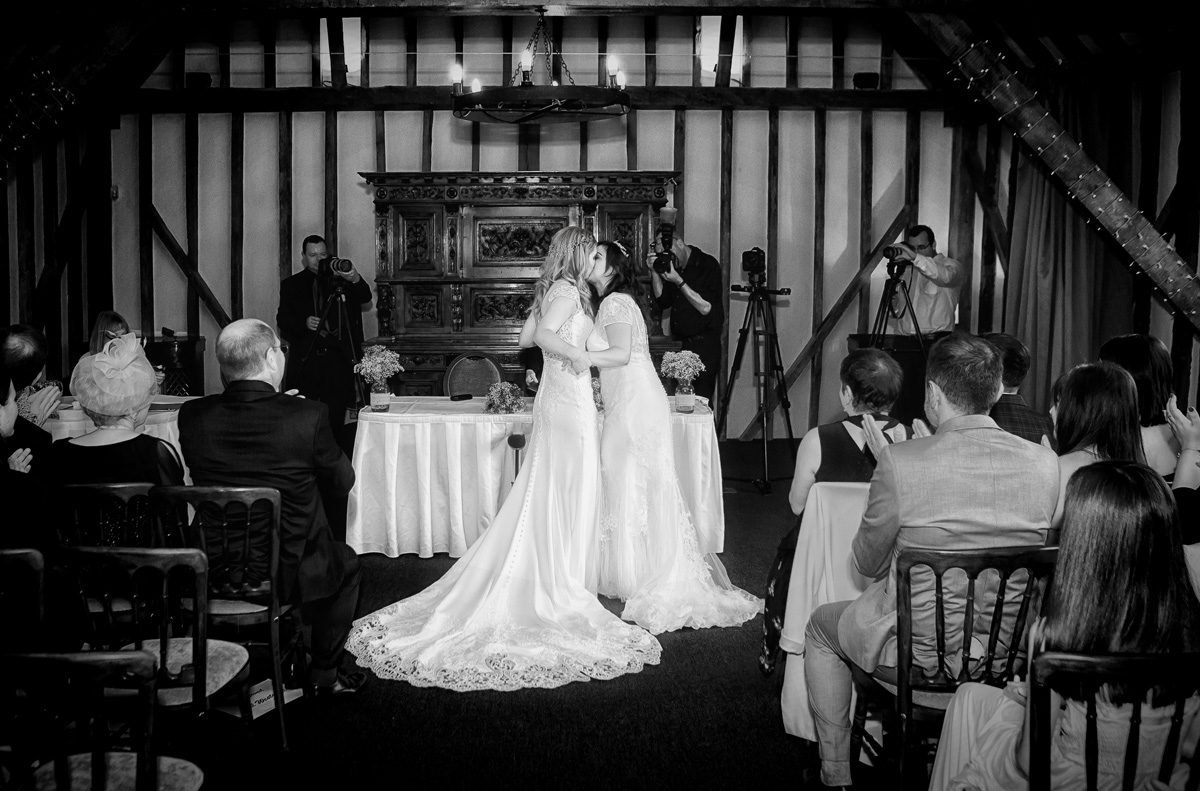 When Z and M got in touch it was easy for us to convey our long time experience in all these areas, and as usual we were able to show much more importantly the kind of “people people” we are, if that makes sense! 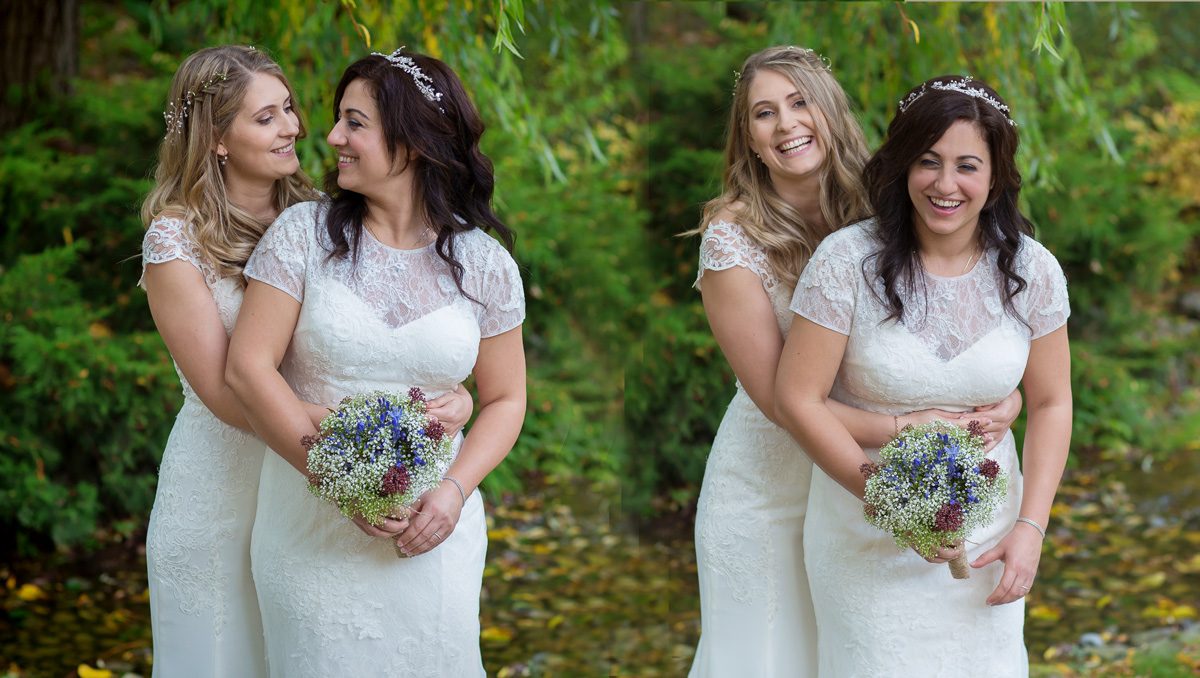 This big day took place at Essendon Country Club near Hatfield in Hertfordshire which we have photographed at previously. It benefits from an impressive raised barn on one level with dramatic steps down to a large dining area for a good sized wedding breakfast and reception.

There are outside areas for alfresco drinks, and of course parts of the golf course for some external photography too. 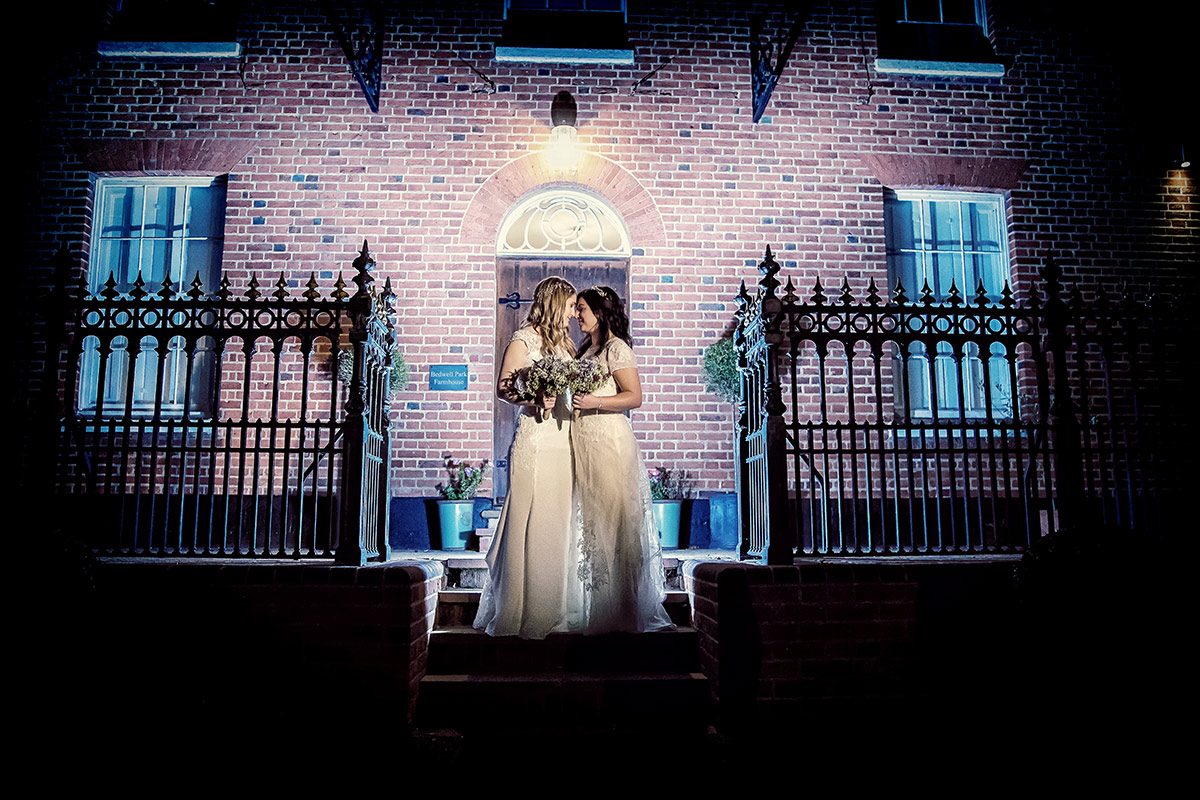 Both Z and M wanted their coverage to start from just before they entered for the wedding ceremony, and what a memorable and dramatic entrance it was. Each bride wound their way through the decorated dinner tables, up the impressive staircase and into the grand barn. The look on each others faces as they saw each other for the first time was priceless and that’s why I included that particular shot in this post. In fact the focus of this description is really to show the love between this fantastic couple and their friends and family rather than endless detail shots. Although we gave the couple over a thousand edited images so there’s plenty of those too! 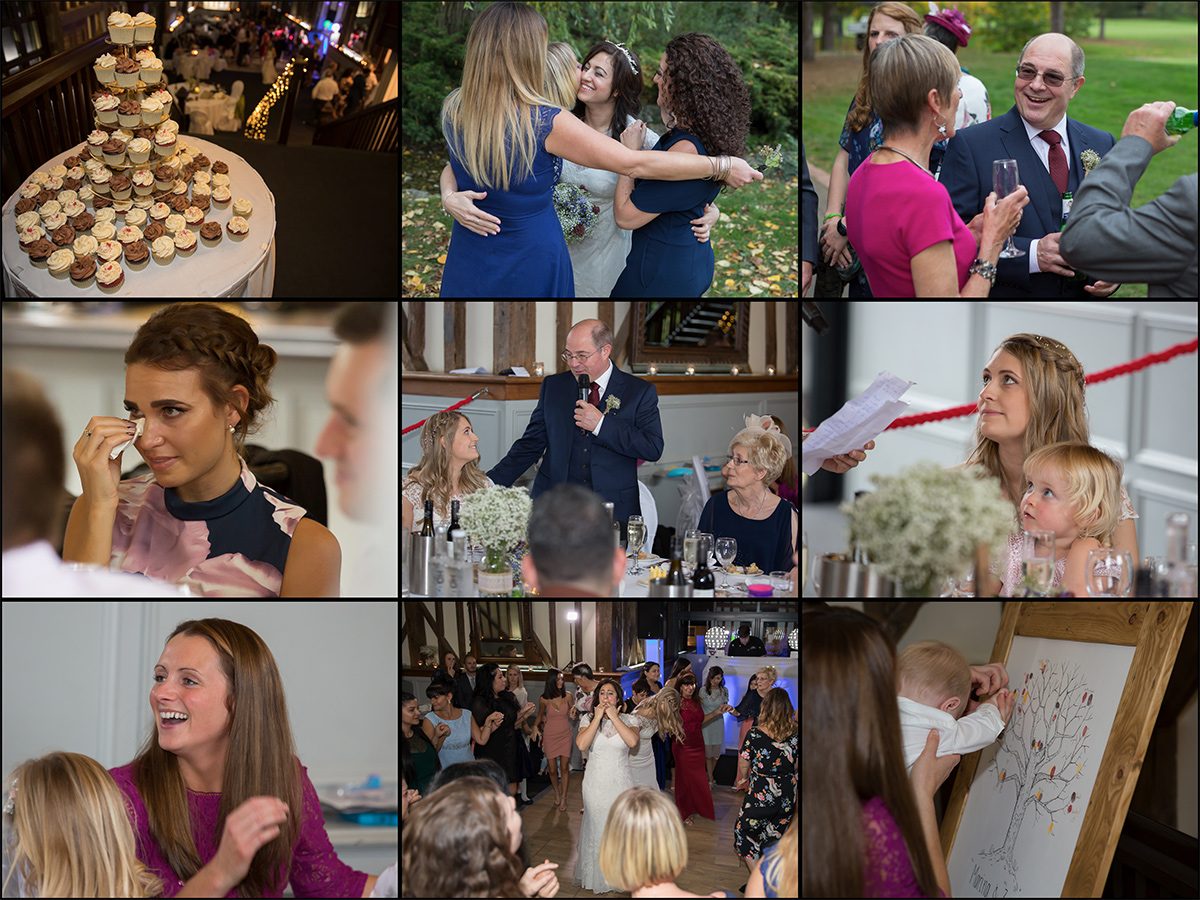 After the drinks reception and some family photos, time restrictions dictated a fast shoot near the barn with the couple. That was fine we are used to that and the results were great. 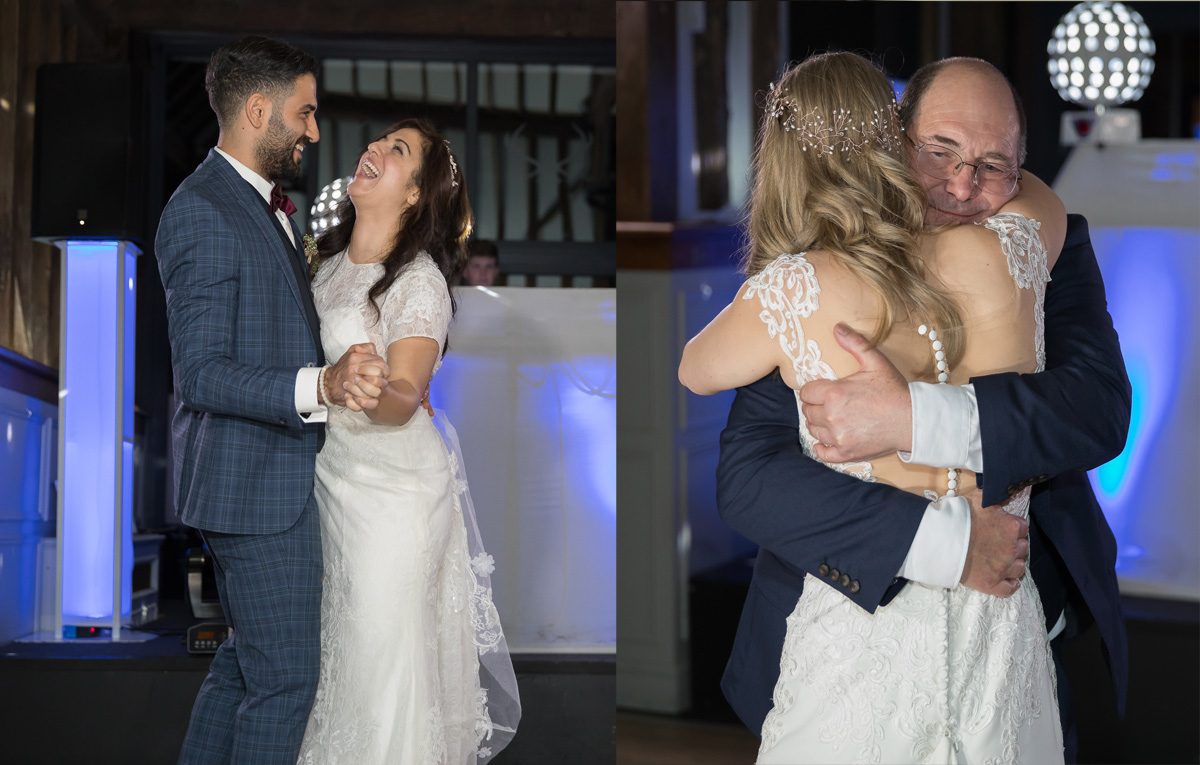 After the wedding breakfast and speeches it was party time, and as M’s family were Greek we were guaranteed a great and lively one. During that we snuck out for ten minutes with the girls to get a few moody shots in the darkness of night before returning to the bright lights and dance tunes of their big day.

First dance for Z was with her father, and for M it was with each of her brothers, which was refreshingly different and really touching to watch.

Here’s a copy of the testimonial from these guys I put on a separate post here:

“Thank you so much to David and Joanna for capturing our special day. One of the main reasons we chose to go with David and Joanna was their ability and talent to capture the moment and use the lighting in a way we saw no one else do. Believe me we carried out our research and Big Day Weddings was our first choice. We had a great time getting to know them both and David kept us laughing all the way through the day. We highly recommend Big Day Weddings to capture your special day in the most uniquely beautiful way.”