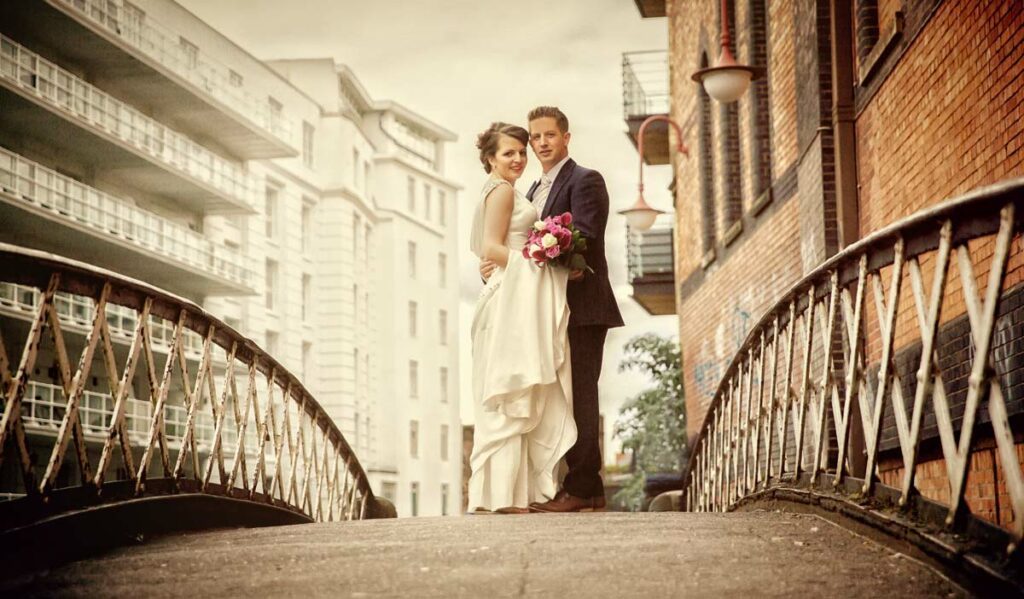 When we first met Danielle and Chris we knew their wedding would be especially fun and interesting. Both had great personalities, which their wedding would reflect, and they really wanted to make their special day memorable, not just for themselves but also their guests. We think they were first attracted to myself and Joanna for our sense of fun and originality in our wedding shots, which we would describe as a mixture of documentary, fashion inspired and quirky. It is no coincidence that the couples we photograph look relaxed and happy in their images, if they didn’t we would definately blame the photographer! 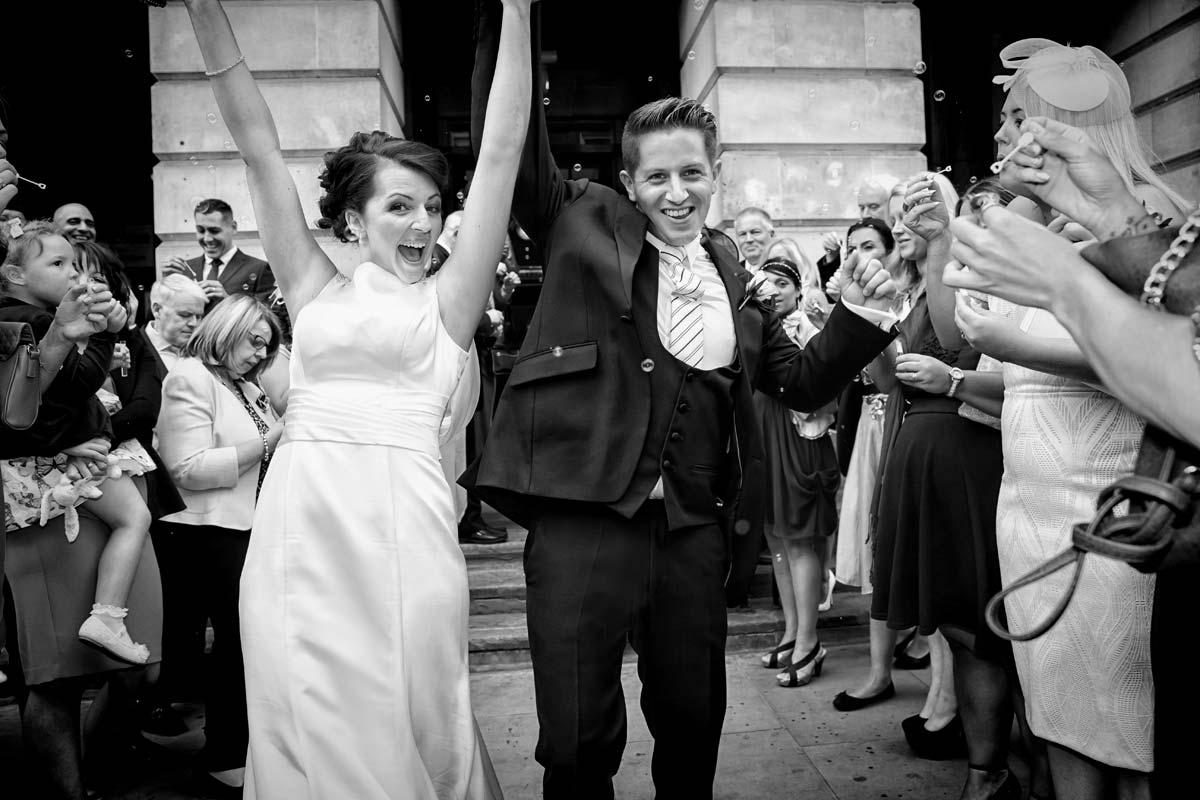 I secretly gave Danielle ten extra brownie points for coming from Yorkshire (just kidding) and was immediately prepared to overlook the fact that Chris was a life long West Ham fan (once again only kidding, so are some of my friends, oh well…) 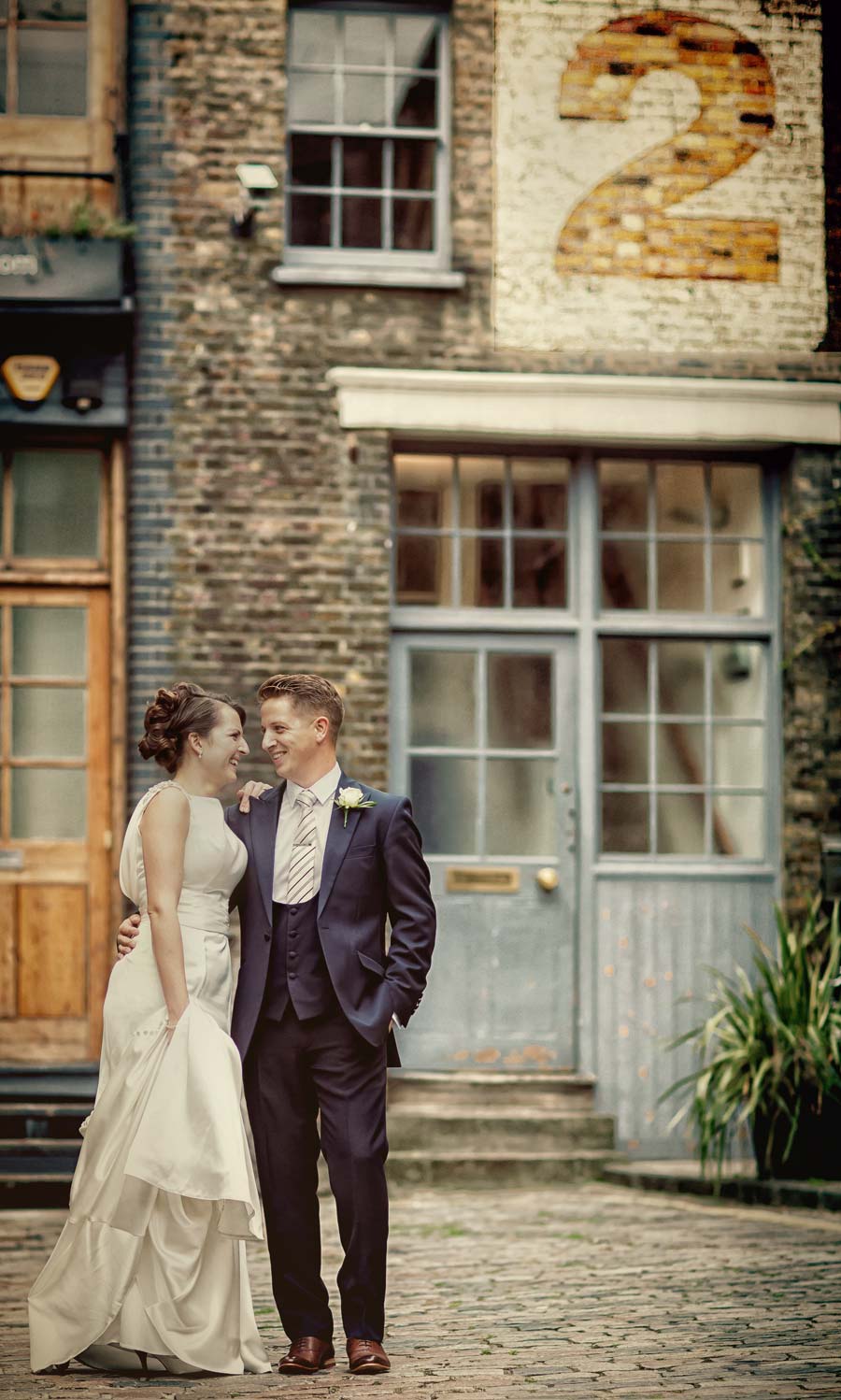 They told us that on the day of their wedding they would have a secret magical mystery tour for their guests before the reception. This would lead them to the Bounce venue in Holborn which was apparently the birthplace of the game Ping Pong, also known of course as table tennis. 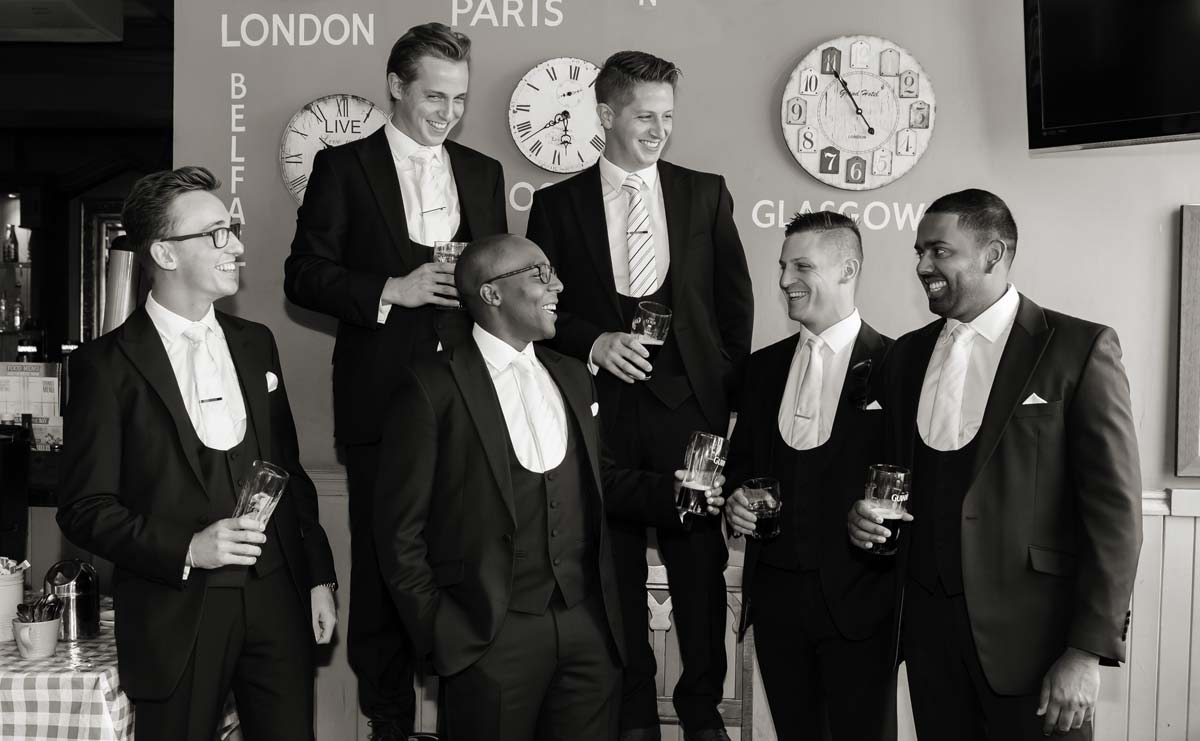 The day began with Joanna documenting Danielle’s preparations at the Holiday Inn in Camden Lock, which was also to be the venue for the wedding breakfast and reception in the evening. I meanwhile hung out in the pub with Chris and the boys at O’Neills across the road from Camden Town Hall, as they prepared for the big day ahead. Tough life. I say prepared, because this seemed to involve the consuming of various drinks and generally having a good time, so wise men indeed then! 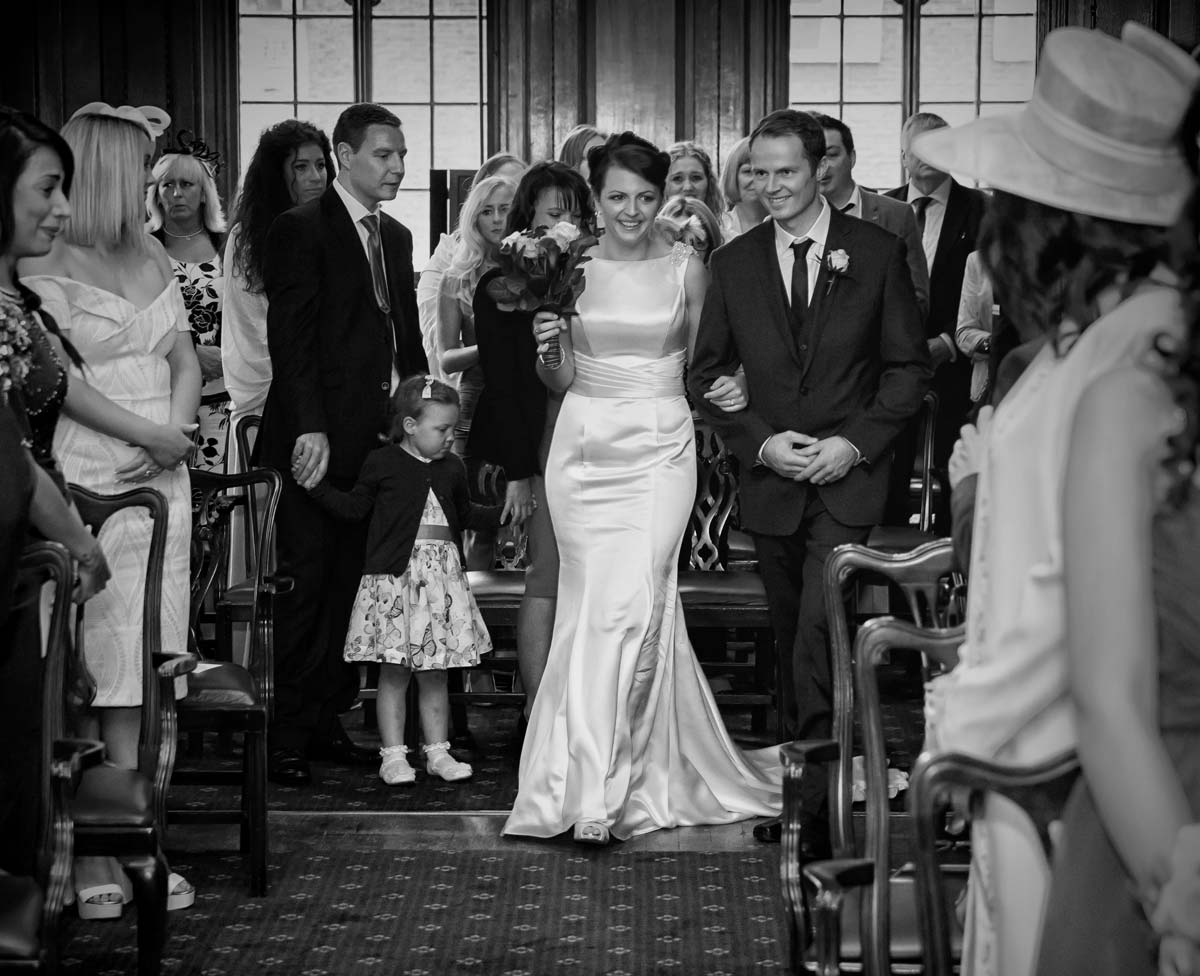 We love Camden Town Hall weddings as we used to live nearby and two of our children’s births are registered there. It’s also a pretty nice venue to get hitched in. Danielle arrived in a fantastic vintage American car, the kind I could image Elvis travelling around in no problem. 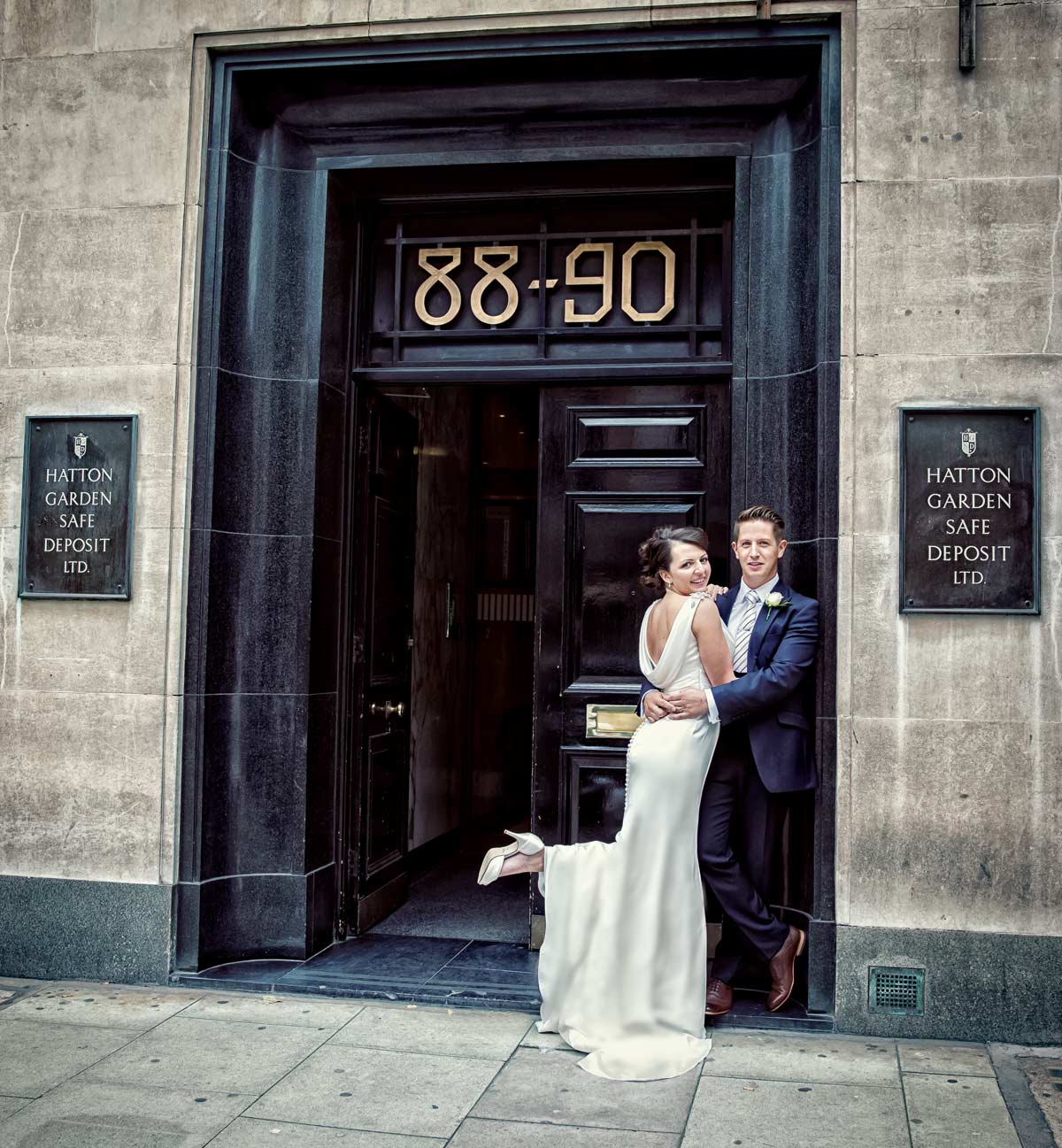 After the ceremony and some group photos the newly weds exited the town hall to a sea of bubbles, three times no less, I think it was a West Ham thing, and it was a great moment. 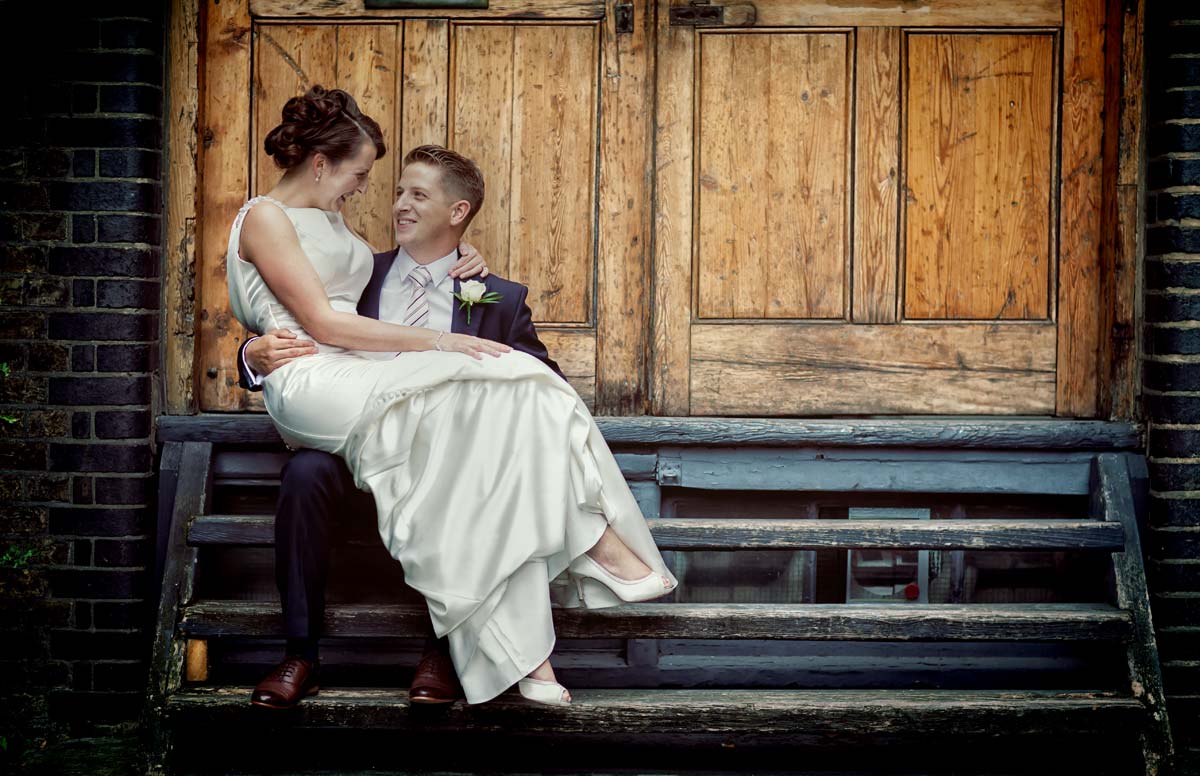 A London route master bus was on hand to take the wedding party to Holborn and Bounce the ping pong venue, for a couple of hours of competitive table sporting fun. 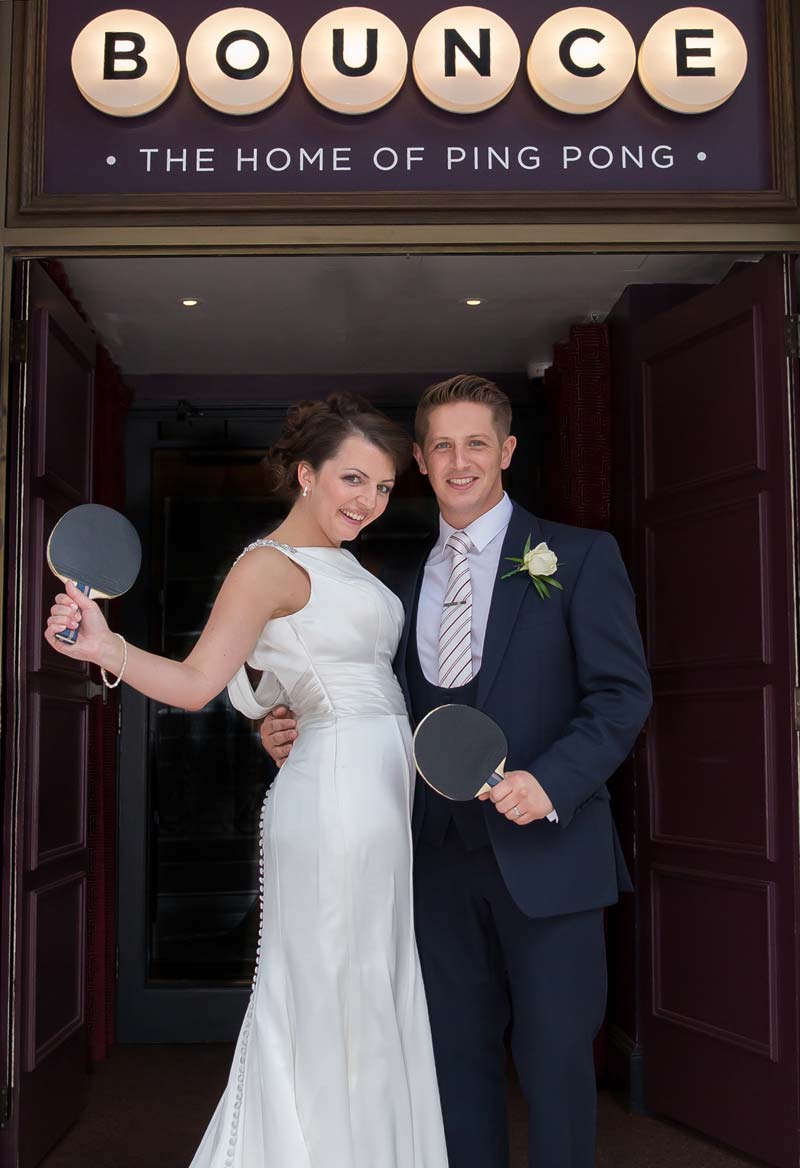 After a while we snuck off with Danielle and Chris to shoot some photos around Holborn and the Hatton Garden jewellery quarter round the corner. We couldn’t resist some images in front of the now infamous Hatton Garden Safety Deposit company, and then headed to Bleeding Heart Yard which I knew from taking Joanna on our anniversary there for a very nice French meal. Bleeding Heart Yard has a rather gruesome history, so maybe it’s best if I don’t mention it, and if the reader is interested then google will reveal all. 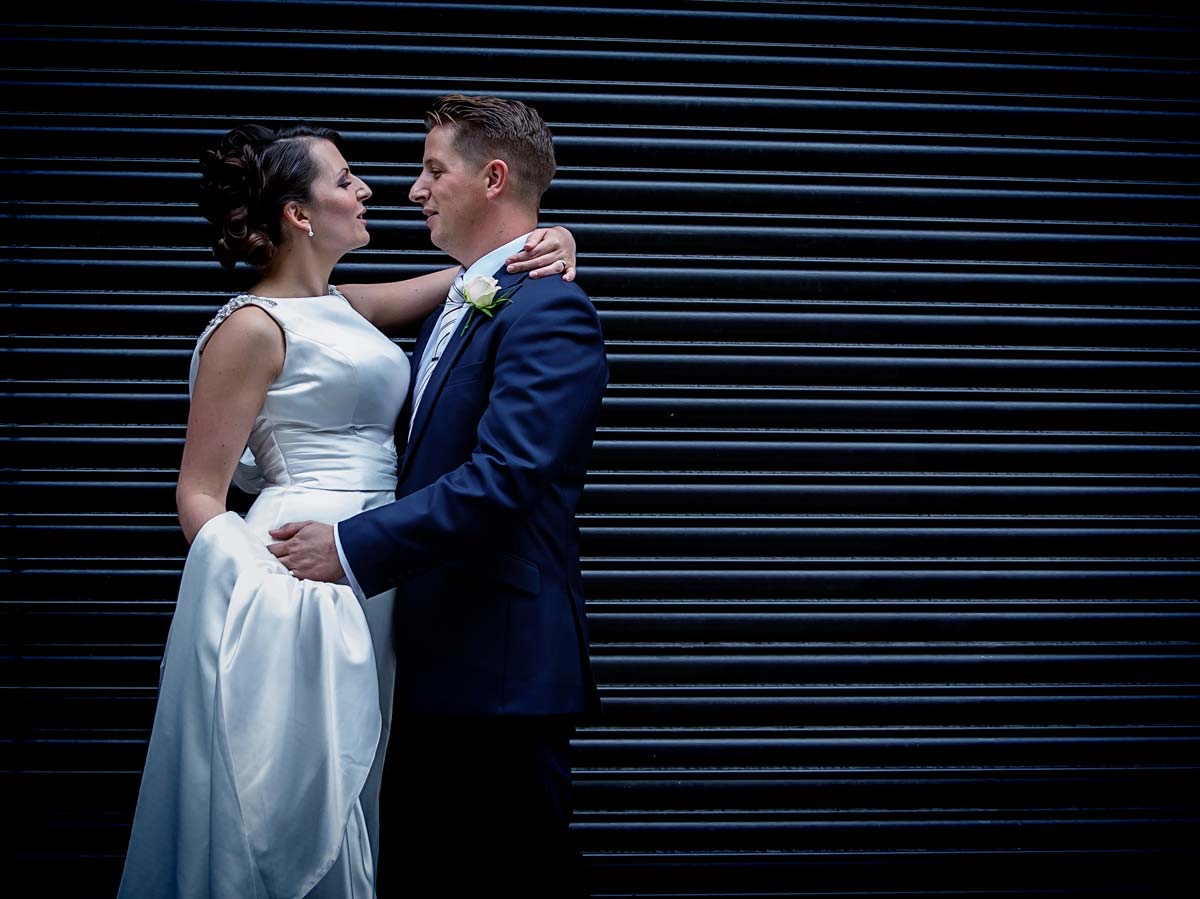 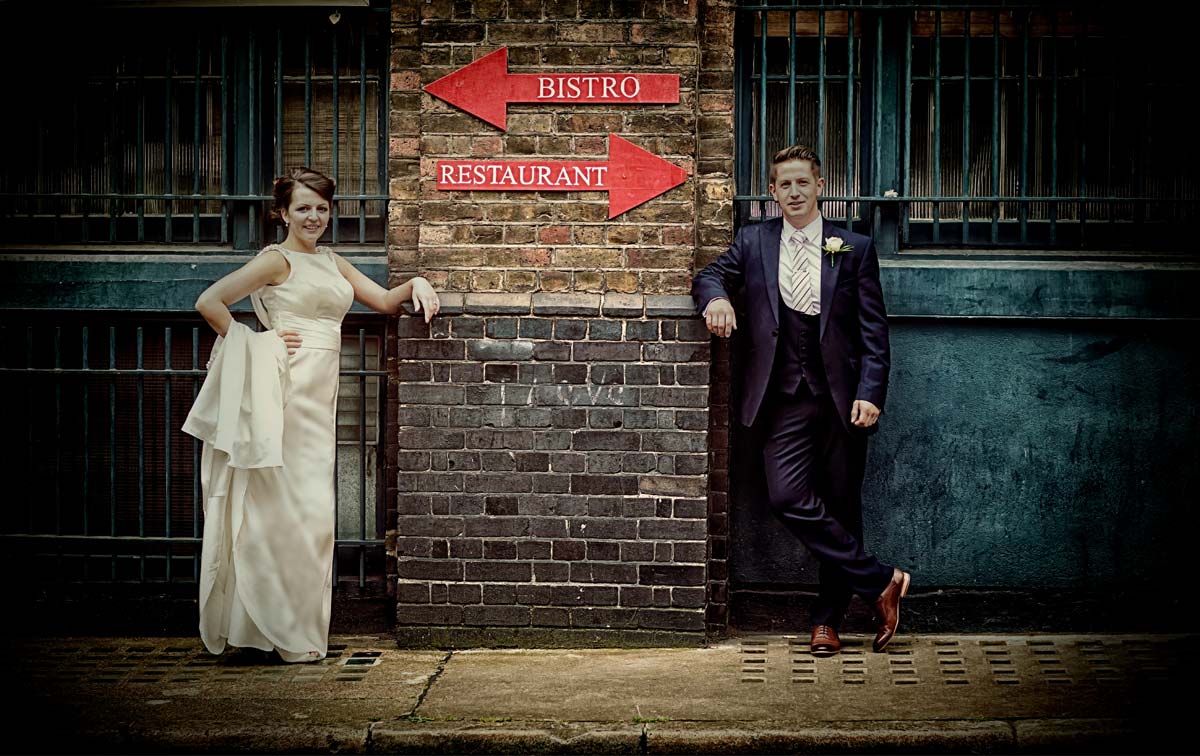 On your wedding day walking around the streets of London shows that Londoners love a wedding couple with all the congratulations and quips they give. One of my favourite moments from this walkabout was when a local Jewish jeweller humorously tried to sell Chris another couple of wedding rings, candid photo and Danielle’s reaction attached. 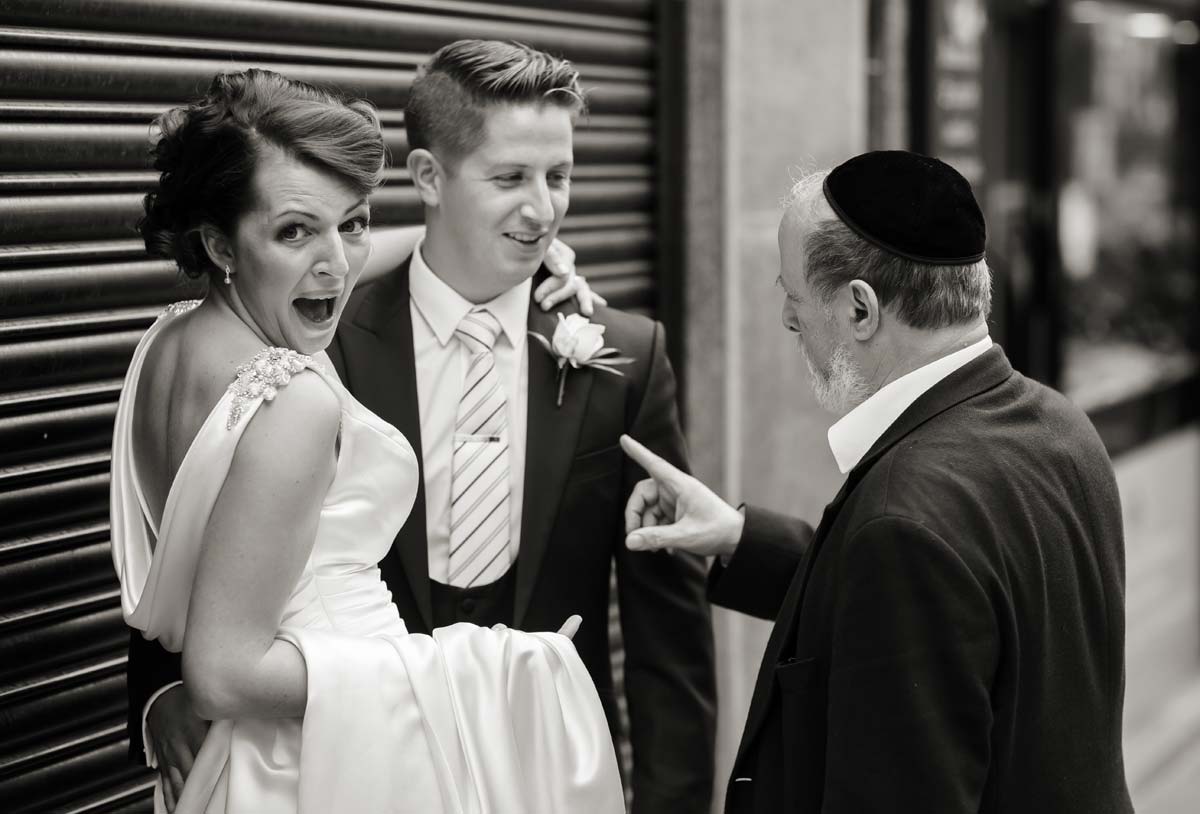 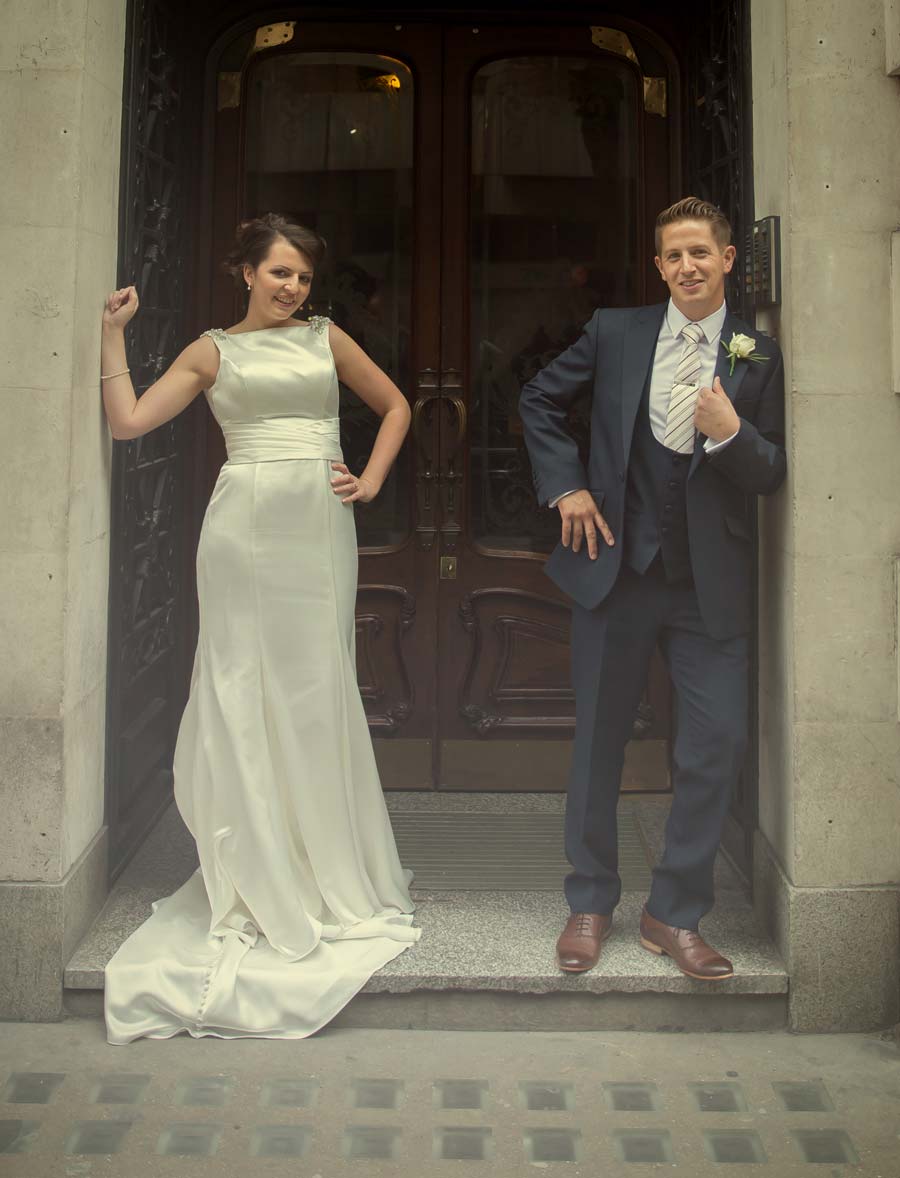 I went to the top of the Holiday Inn and leaned over the balcony for the whole wedding party shot you can see below as everyone made their way to Camden Lock bridge which was fun. There were also plenty of close up versions too. 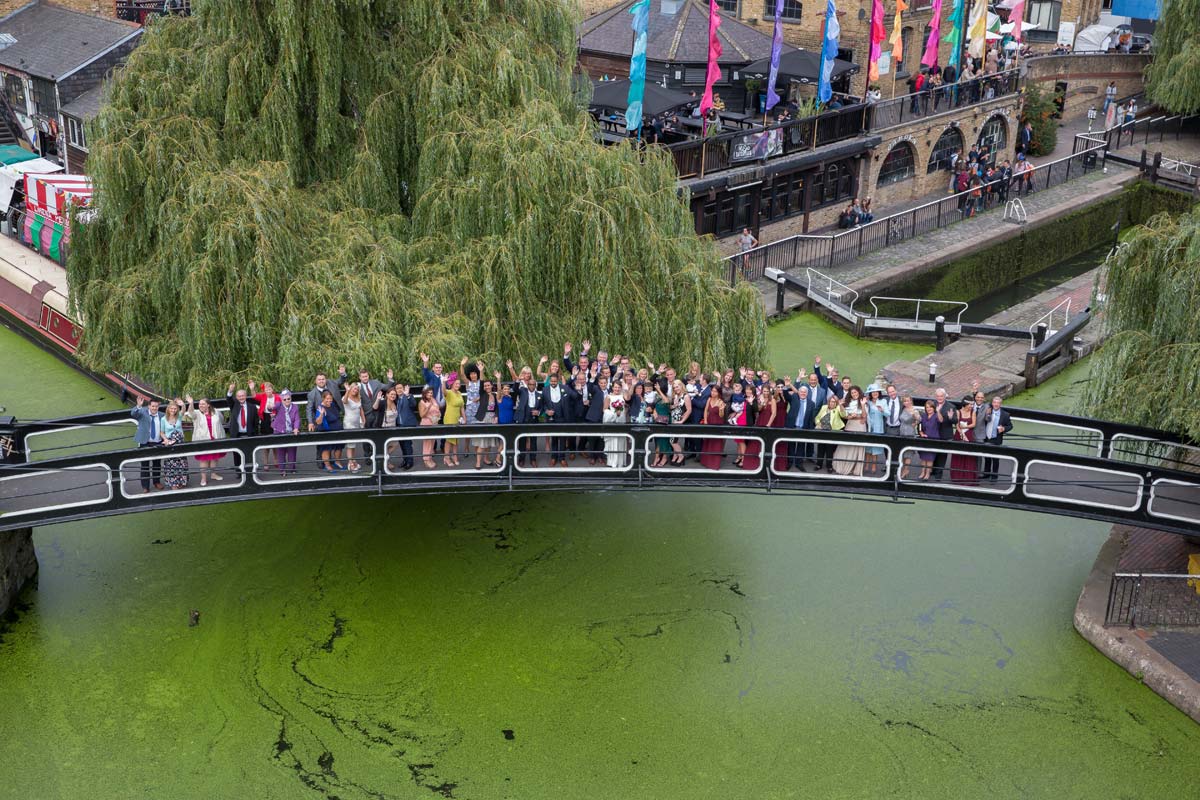 The wedding crowd were a great lot, a good combination of North meets South that we particularly enjoyed being around. 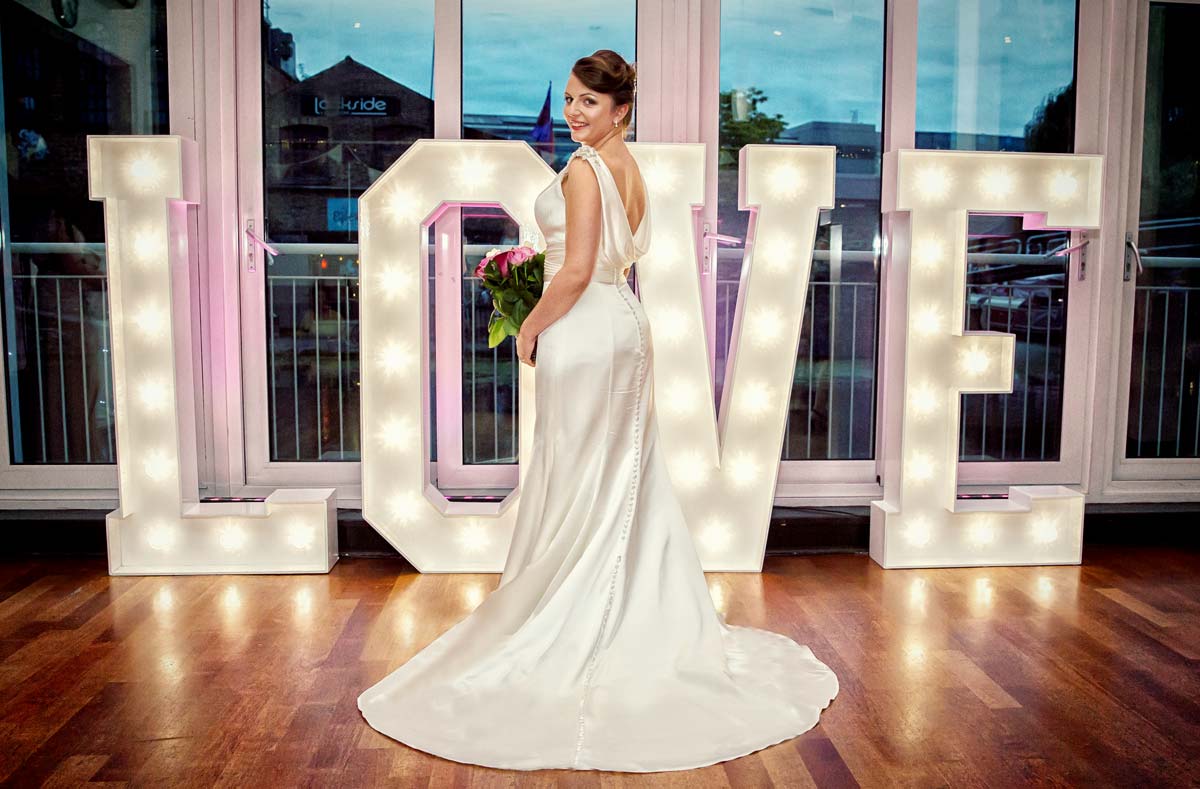 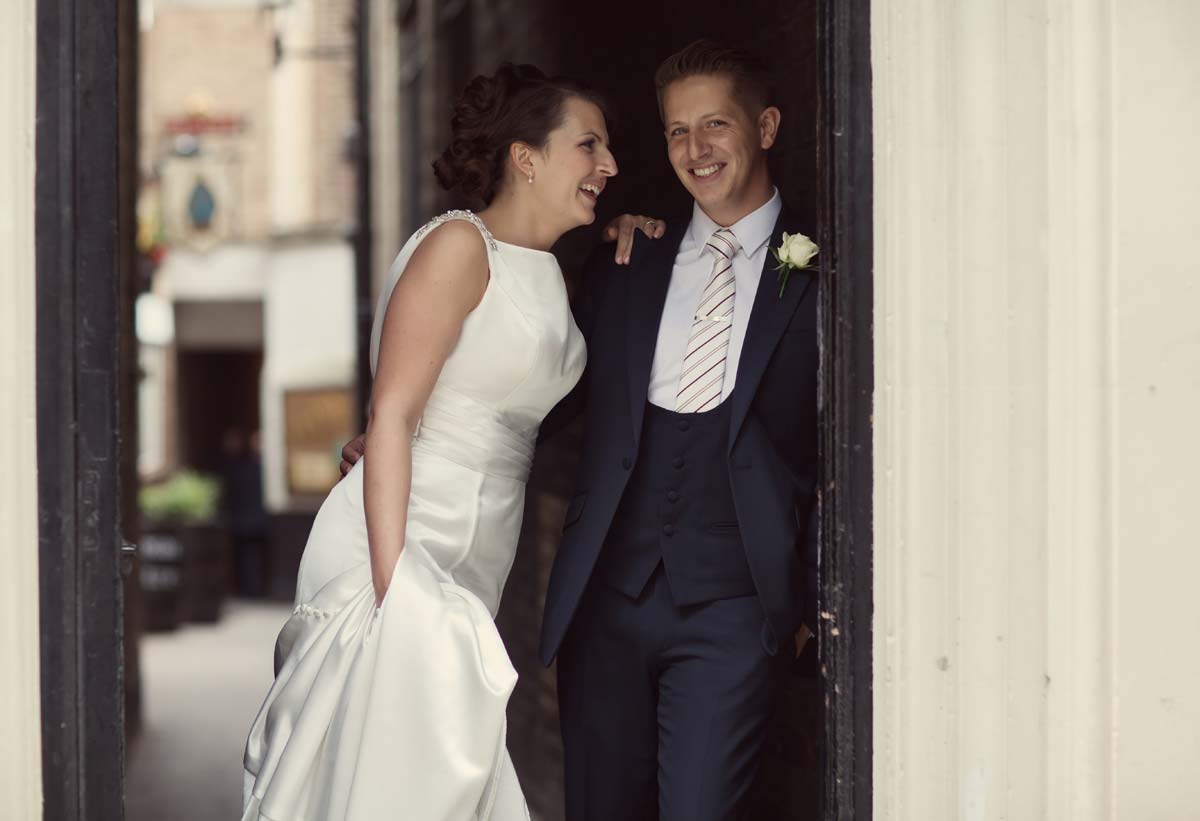 All in all a great day, and we wish Danielle and Chris and their families all the very best for the future. 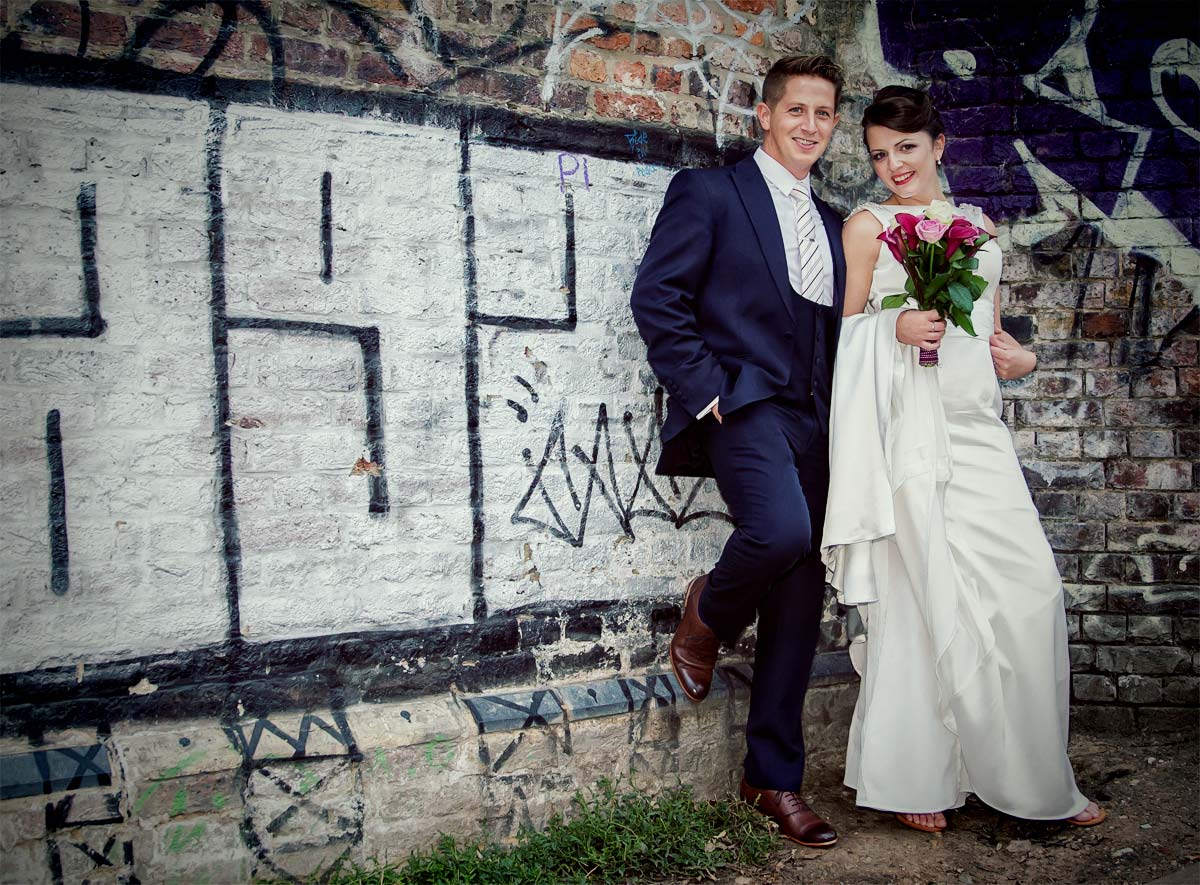 Here is a related wedding post from a nearby district earlier in the year: Islington Town Hall Wedding and see also: The Hatton Garden Wedding Job

You can take a look at some extra shots featured in our new Gallery Three on the Big Day Weddings website: Wedding Galleries 3