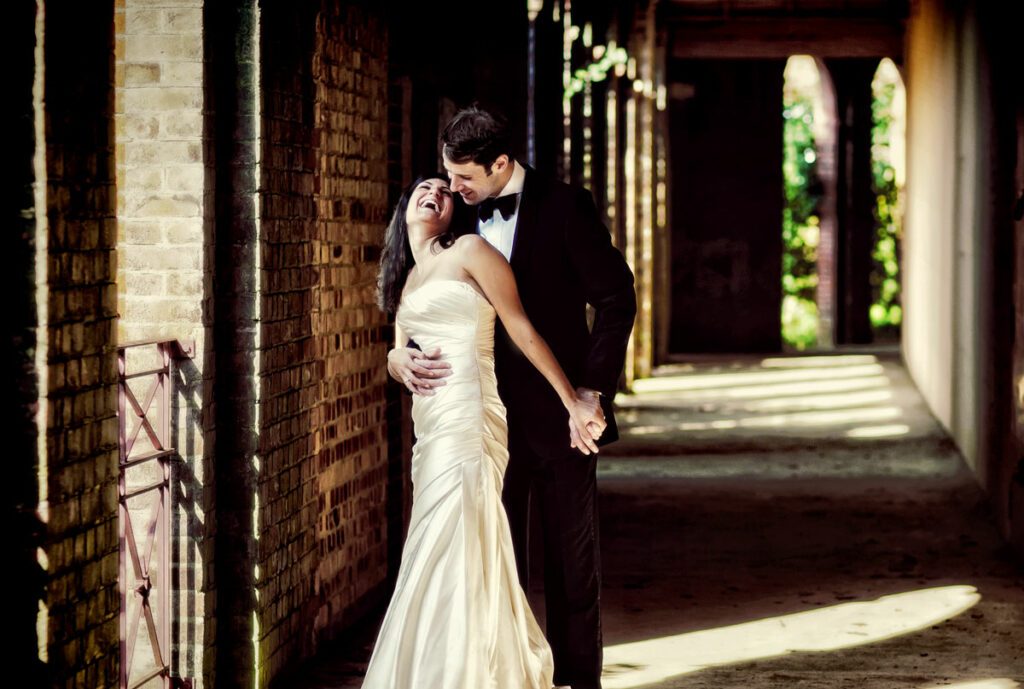 We were delighted as ever to photograph at one of the capital’s most famous and iconic venues in our role as London Waldorf Hilton Hotel wedding photographers for Danielle and Ben’s big day. 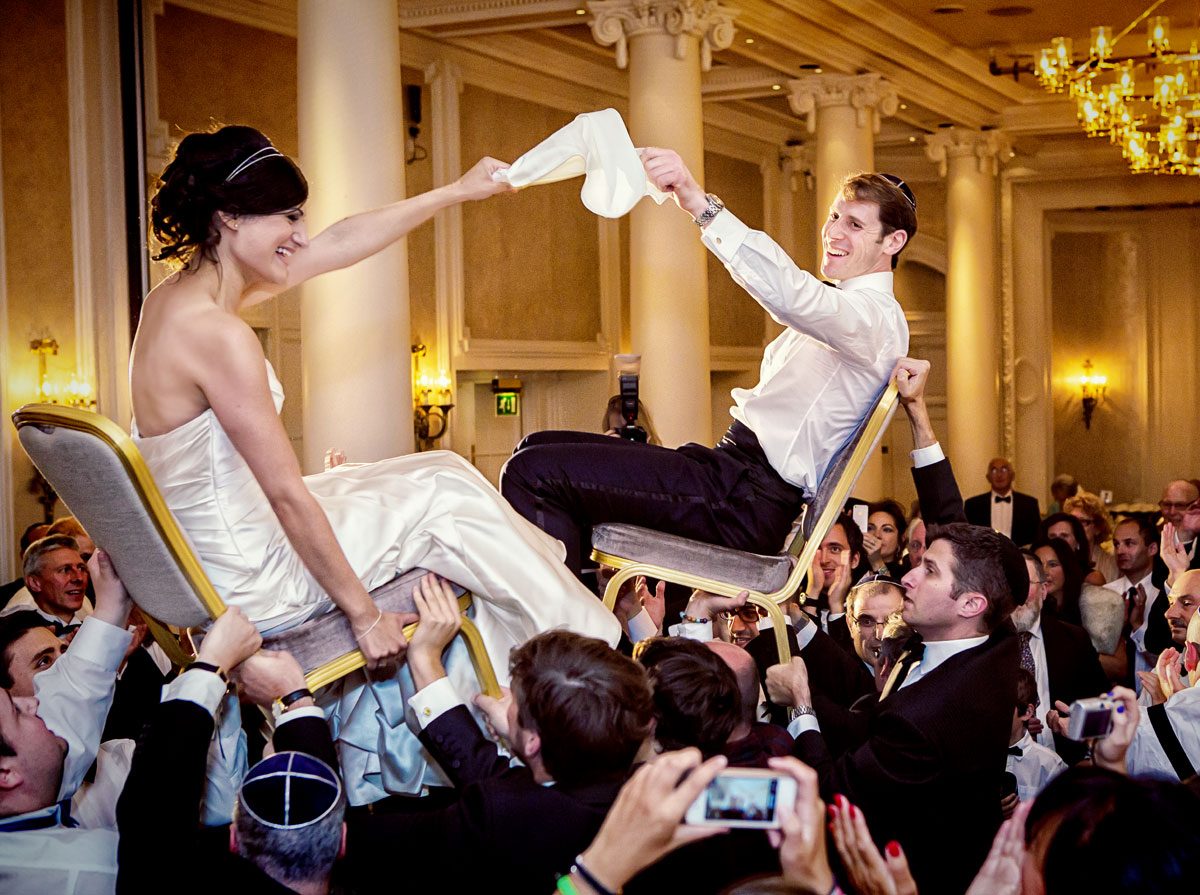 This Edwardian gem was opened in 1908 and commissioned by William Waldorf Astor 1st Viscount Astor, and has been a landmark in the Covent Garden area of central London ever since. It’s certainly a classic venue for a celebration of any kind and Danielle and Ben’s Jewish wedding day was no exception! 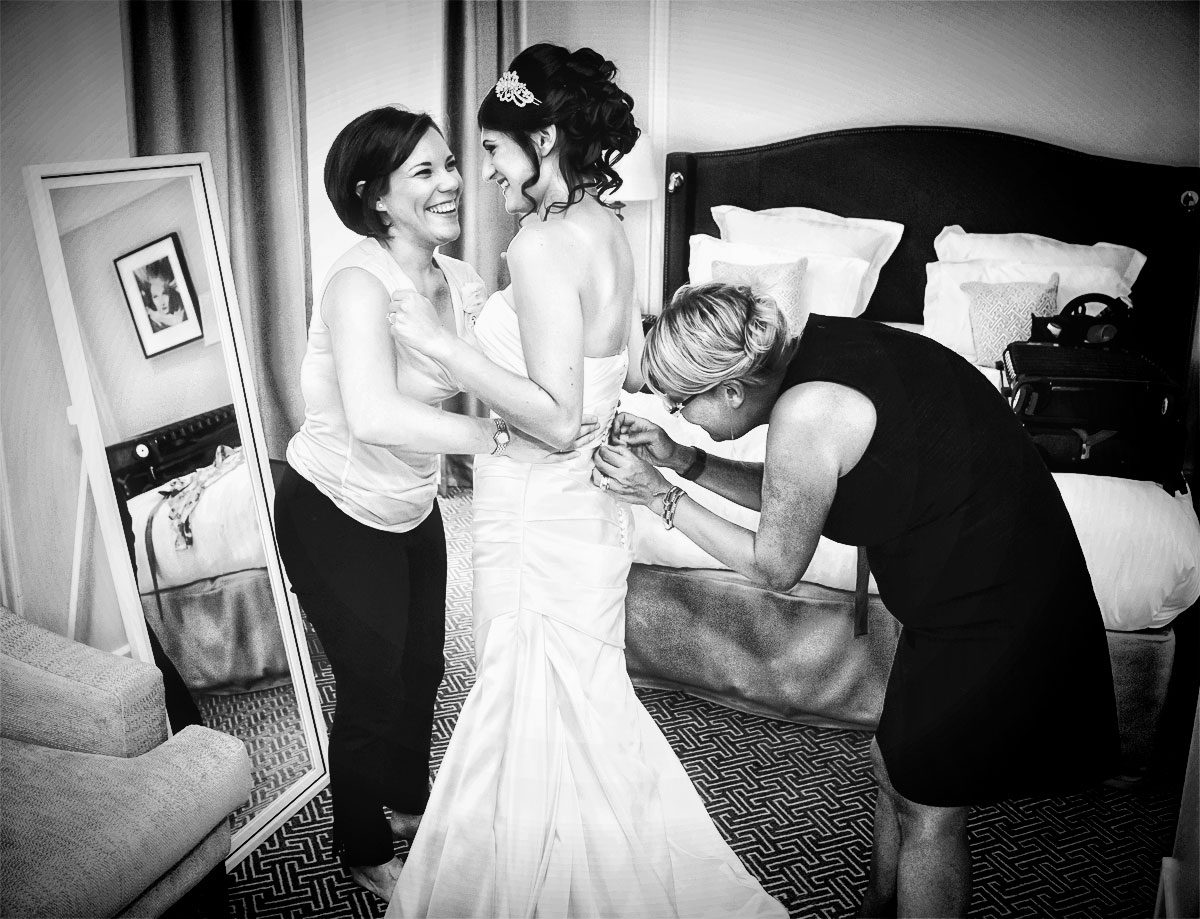 Our coverage started with Danielle and her bridesmaids and families preparation’s at the hotel itself in one of their classic suites. Ben and his groomsmen prepared themselves in the fabulous Palm Court area of the Waldorf, a spectacular Edwardian glass roofed space that was immortalised on celluloid in the 1953 film “Titanic” as the famous ship’s ballroom. 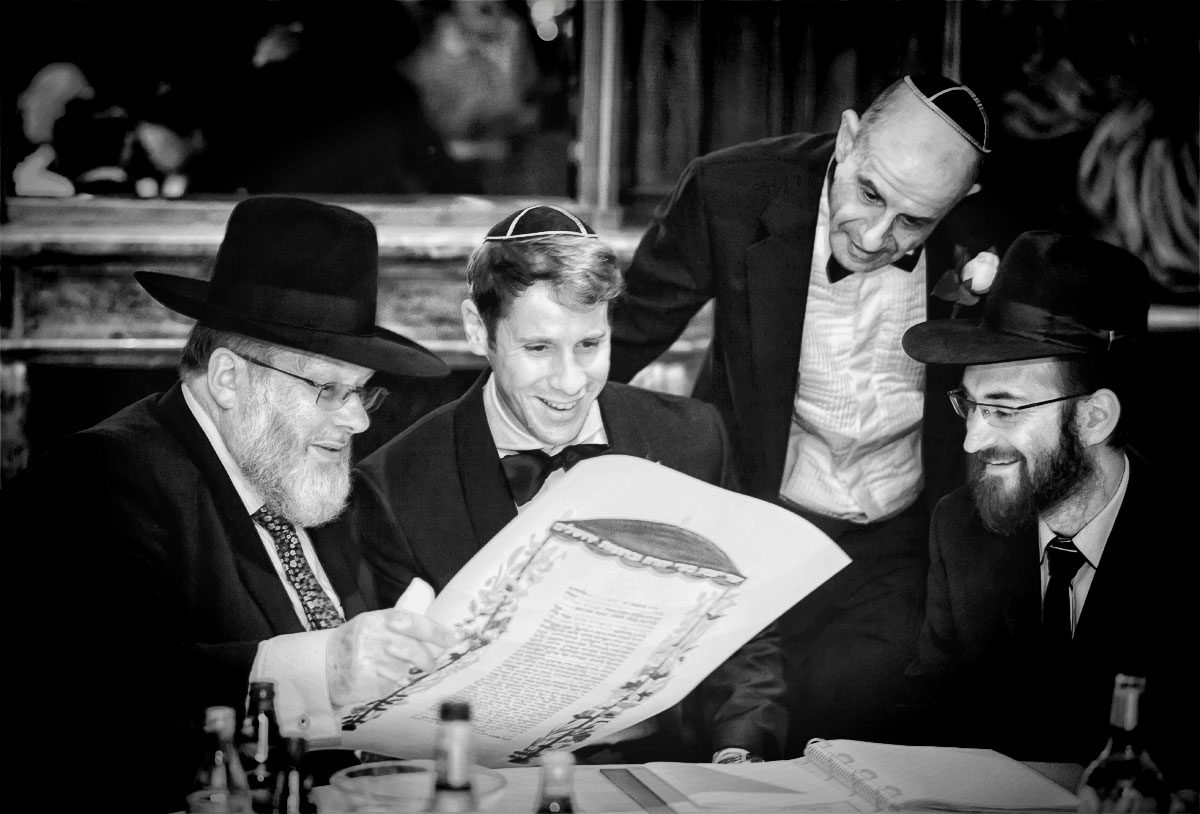 The Palm Court area was where the wedding ceremony itself and bedekken (unveiling ceremony) would take place, with a beautiful white chuppah (wedding canopy for those not au fait with the term) featuring as the centrepiece. 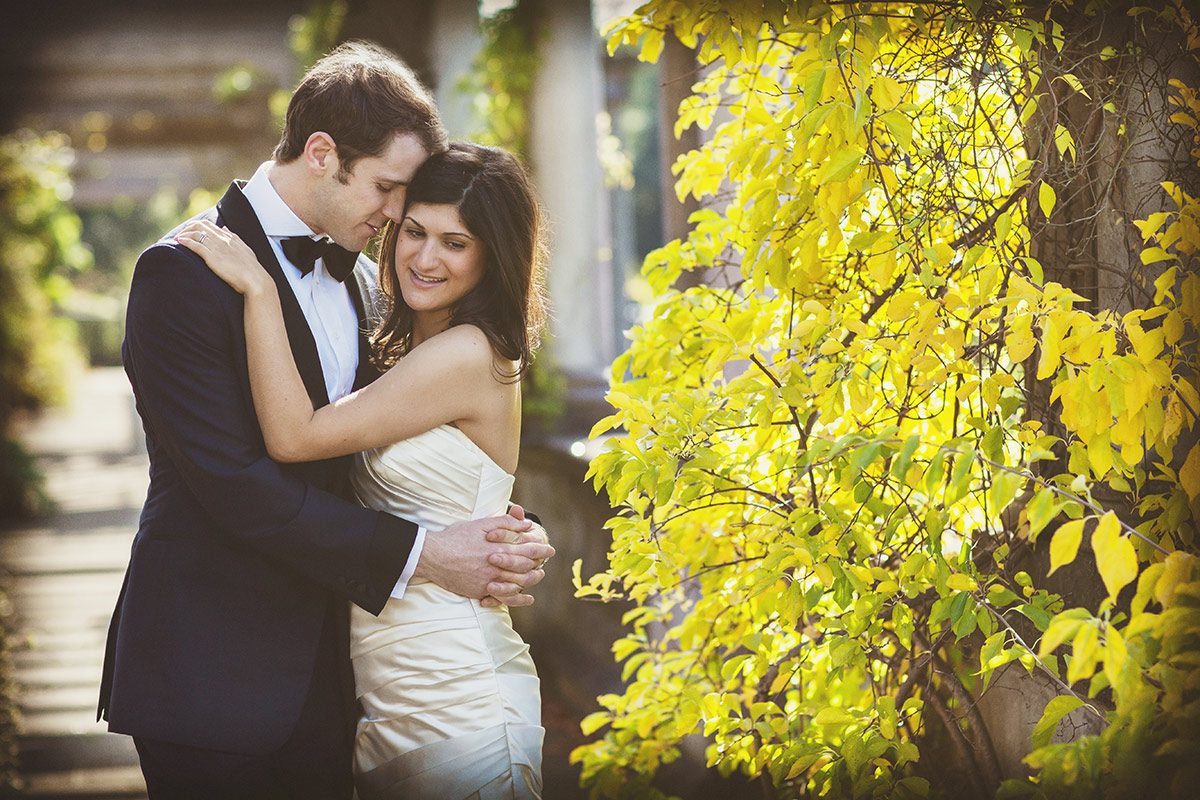 After some photographic time with the ladies of the day, and then Ben and best men shots I made me way to the Tish room for the start of the wedding day formalities. We are veterans of Jewish wedding celebrations, but for those not familiar with them reading this post the “Tish” (sometimes spelt “tisch”) is a time when the men of the day get together in a dedicated room to eat and drink a little, socialise, and sings some songs before the serious business of the groom marrying his bride. It is also a time when the rabbi can explain the meaning of the jewish marriage certificate to the groom to be and get him to formally agree to it’s terms. 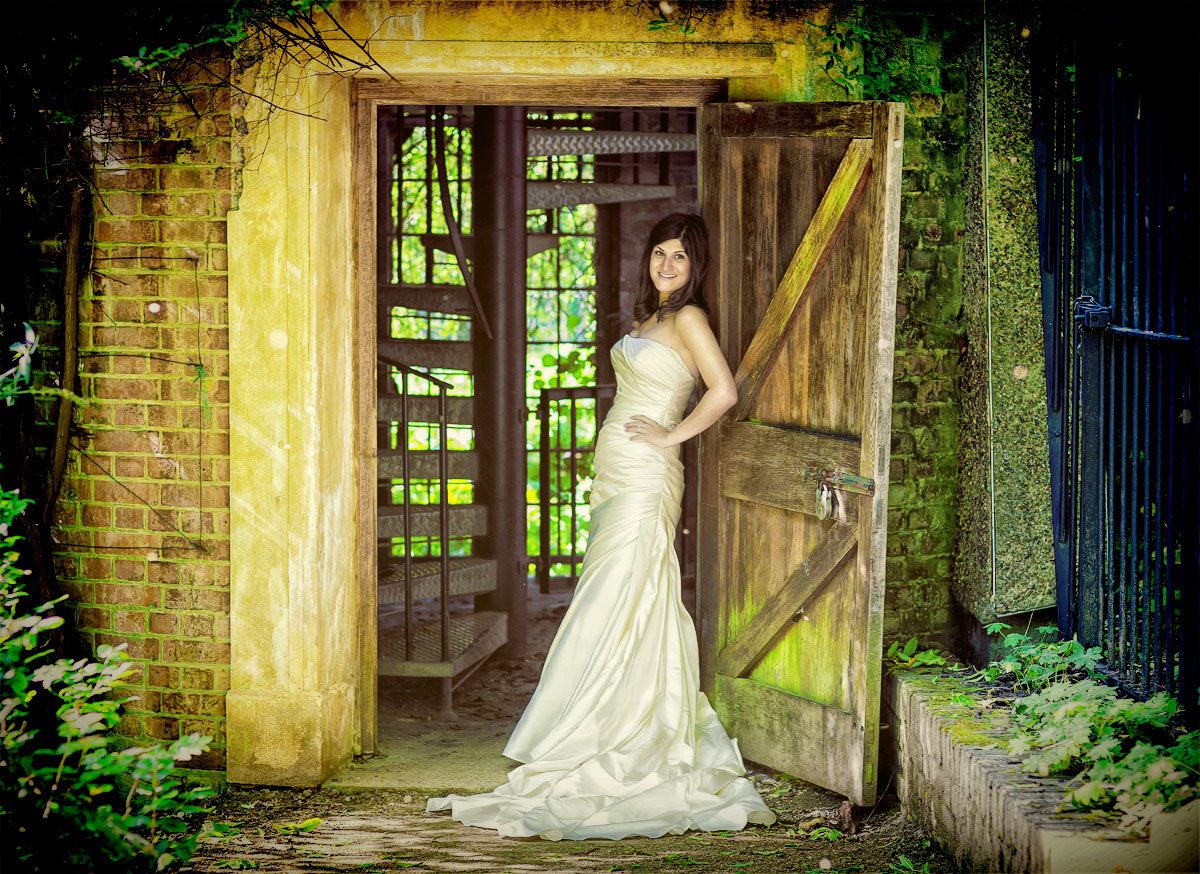 The “bedekken” which Danielle chose to have in front of the wedding party is stepped in Jewish tradition, and to put it simply is a veiling of his future wife by soon to be husband (also spelt badeken). It is a moment often charged with fantastic emotion, as it is the first time bride and groom see each other on their wedding day. 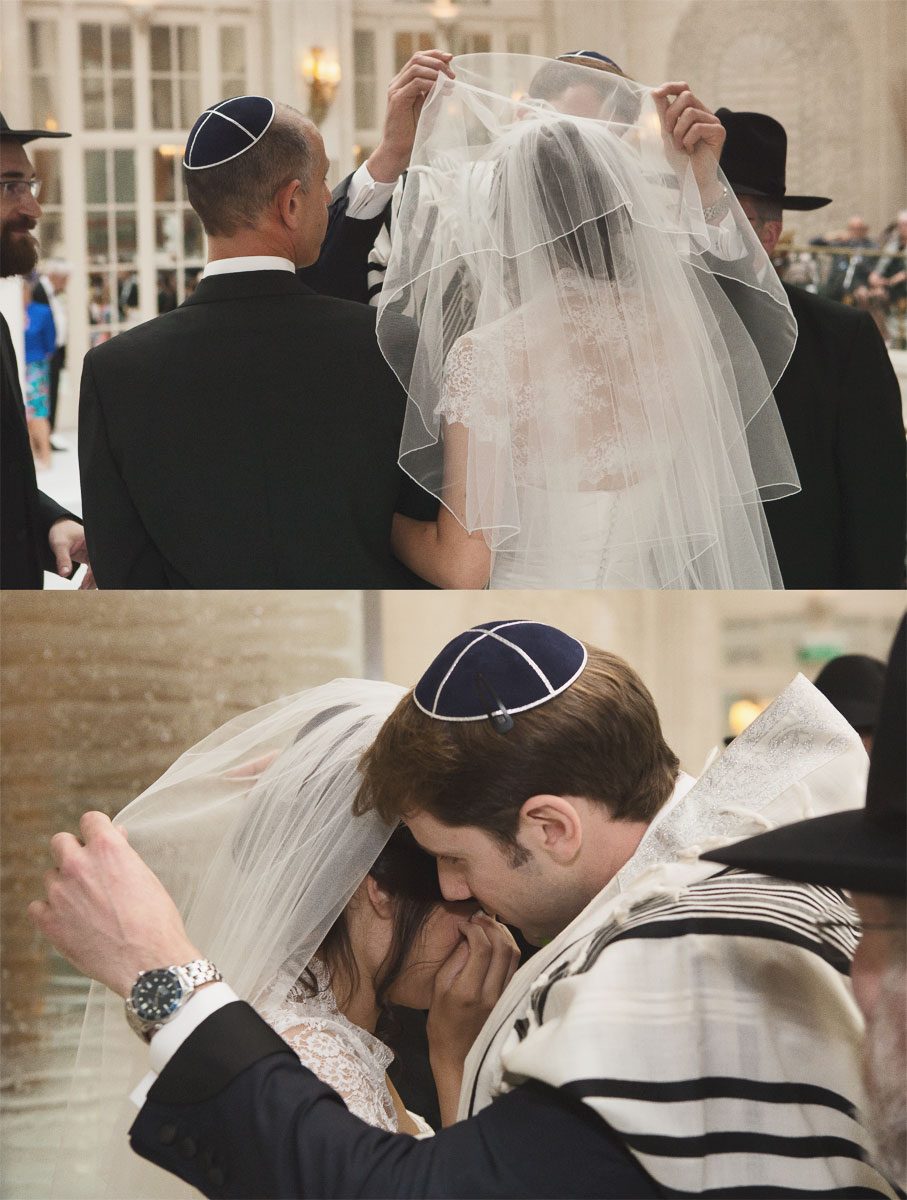 After that came a lovely heartfelt ceremony under the chuppah. I shot images close by under the canopy with the couple, their parents and rabbis, while Joanna shot discreetly from various angles around the Palm Court. Video we should mention this special day was provided by Barry Cookson. 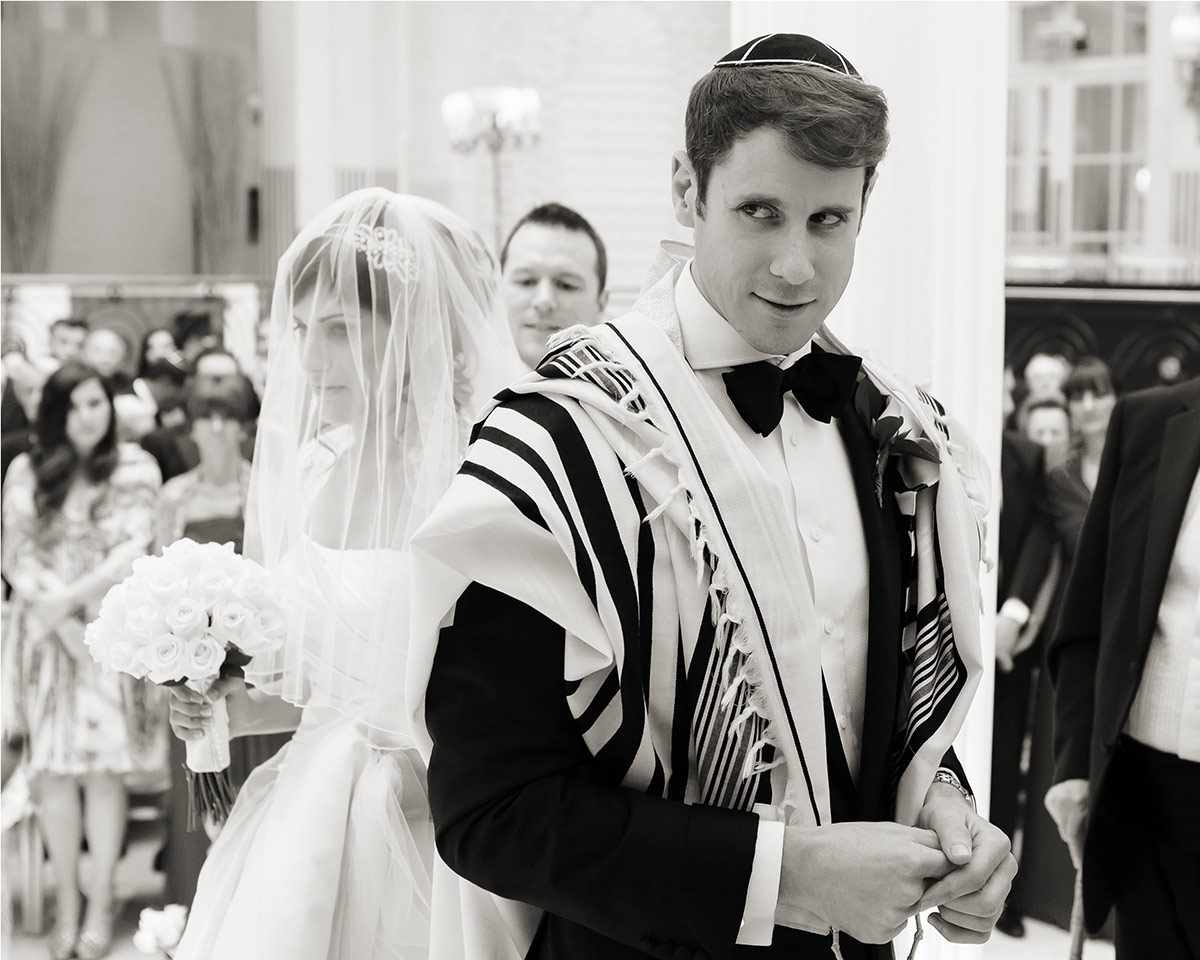 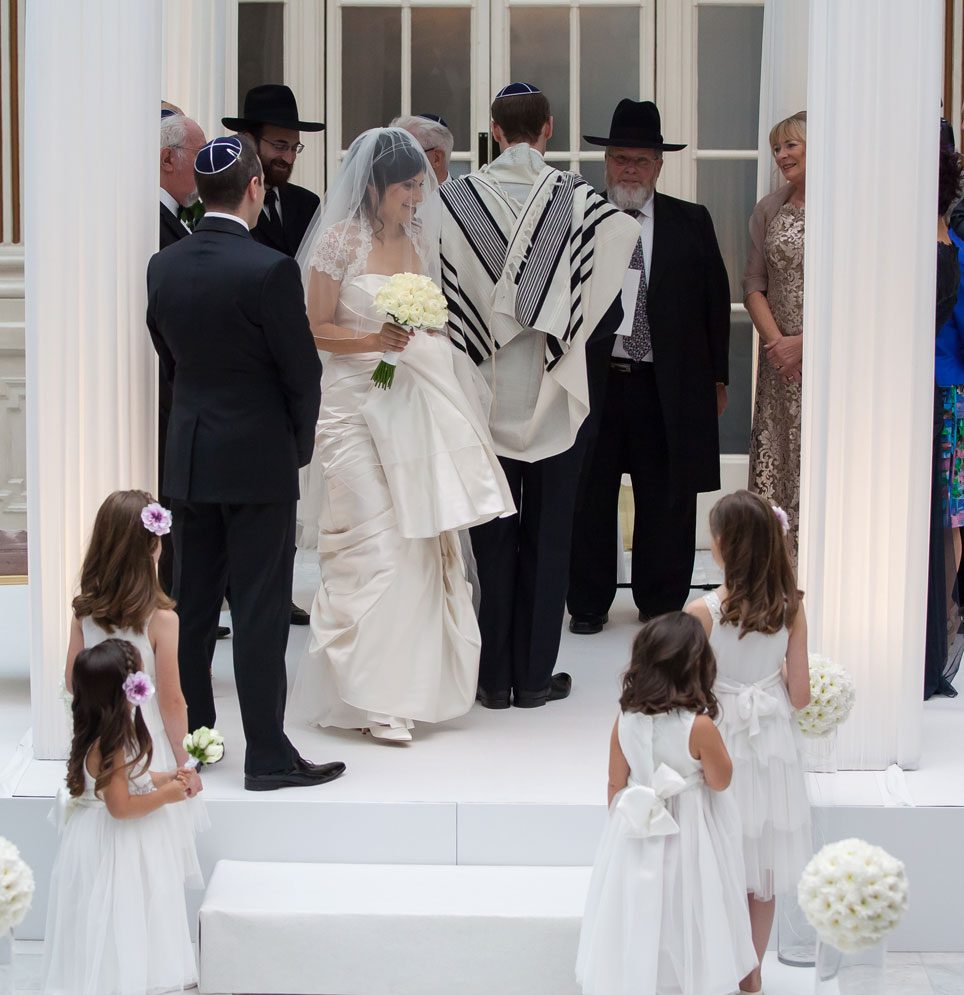 After the smashing of the glass underfoot and the inevitable enthusiastic celebrations it was time for champagne and canopies around the Court. I used this time to photograph some pre planned family shots, while Joanna went round doing some reportage photography and taking guest request shots as often happens at this time, especially at a Jewish wedding! 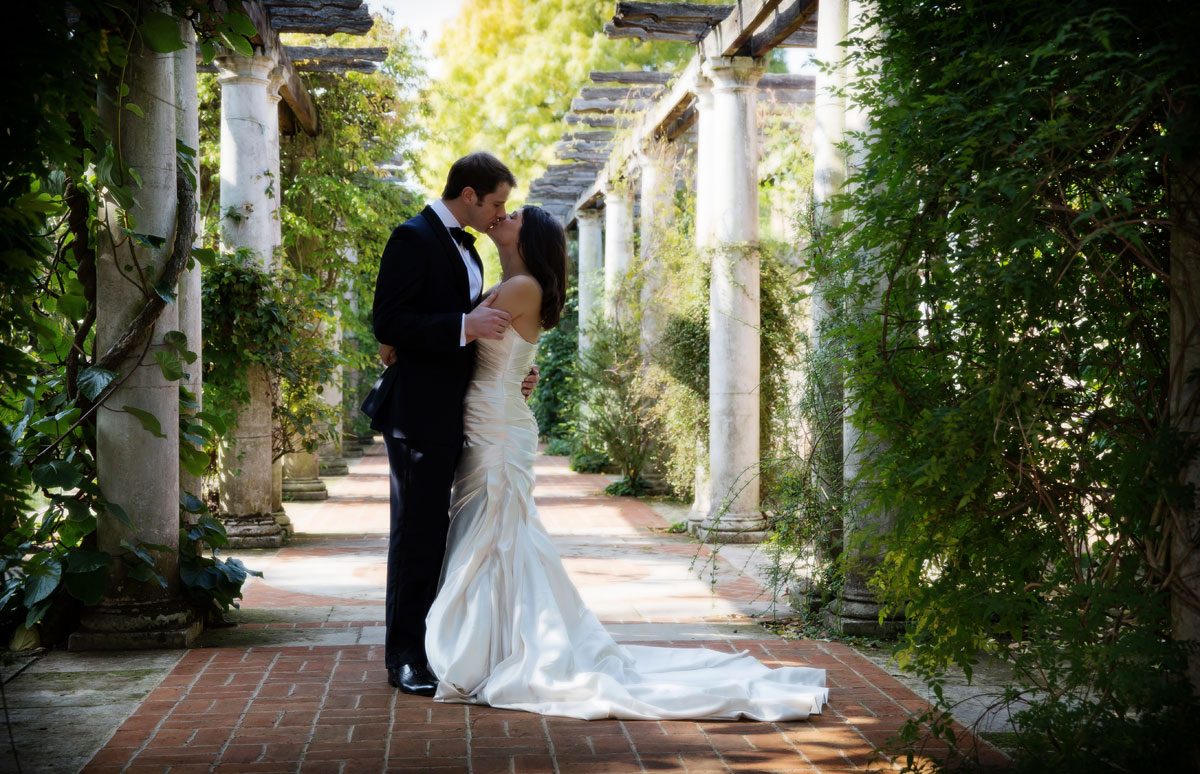 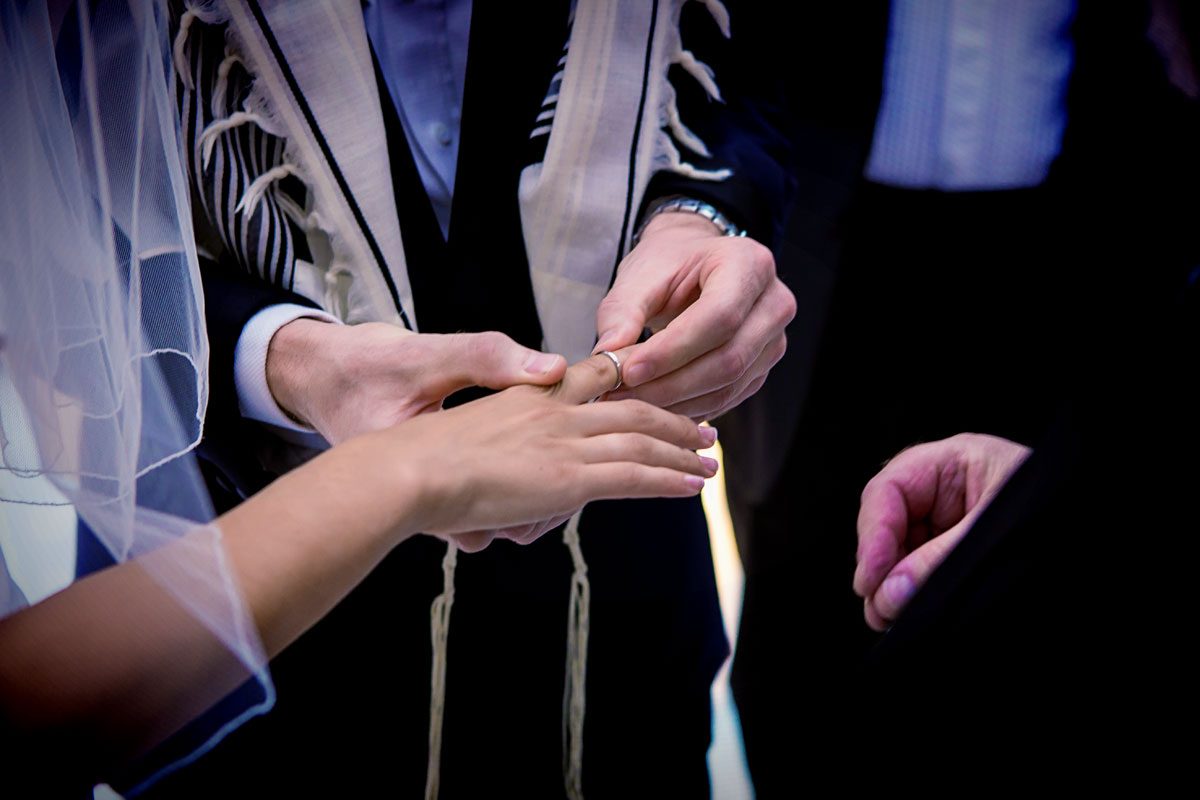 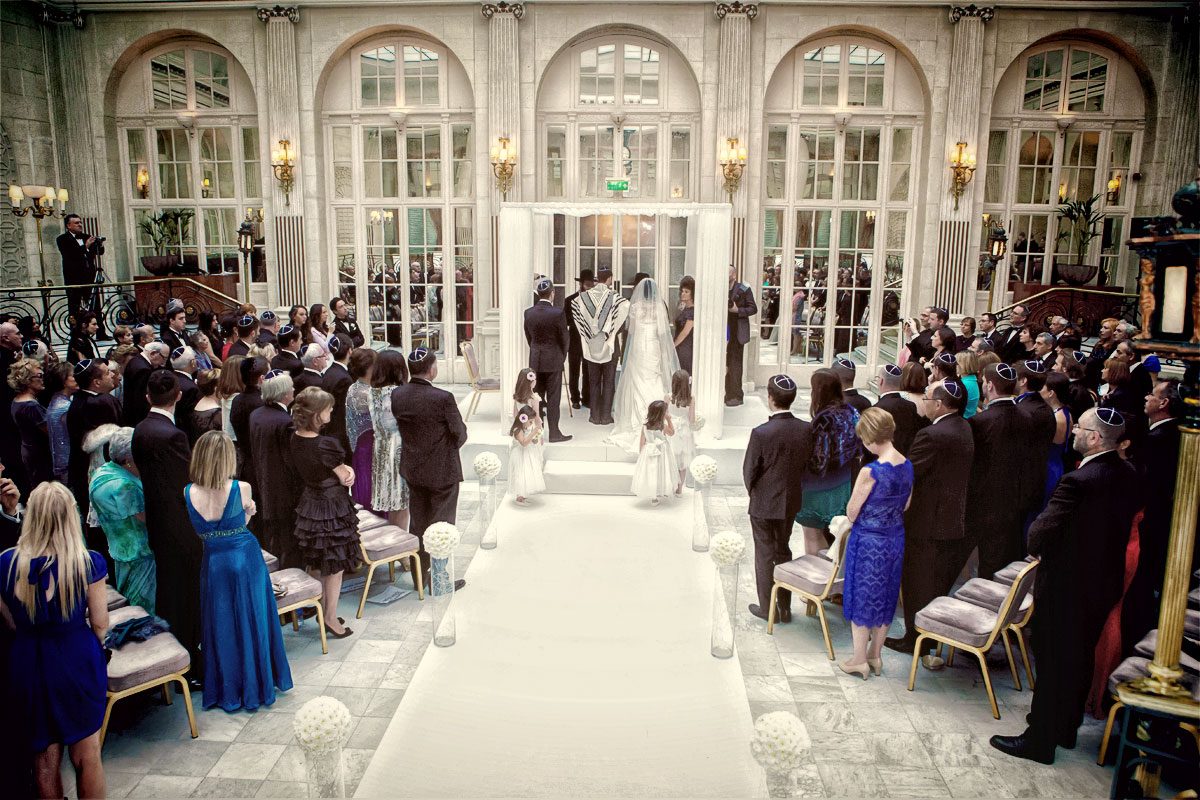 The wedding breakfast took place in the magnificent Adelphi Suite, along with some very energetic Israeli dancing, speeches, cake cutting and a great deal of partying till late into the night. As usual with wedding receptions of this size at the Waldorf Hilton there was a great live band to keep the energy going to top off a splendid and dramatic day all round. 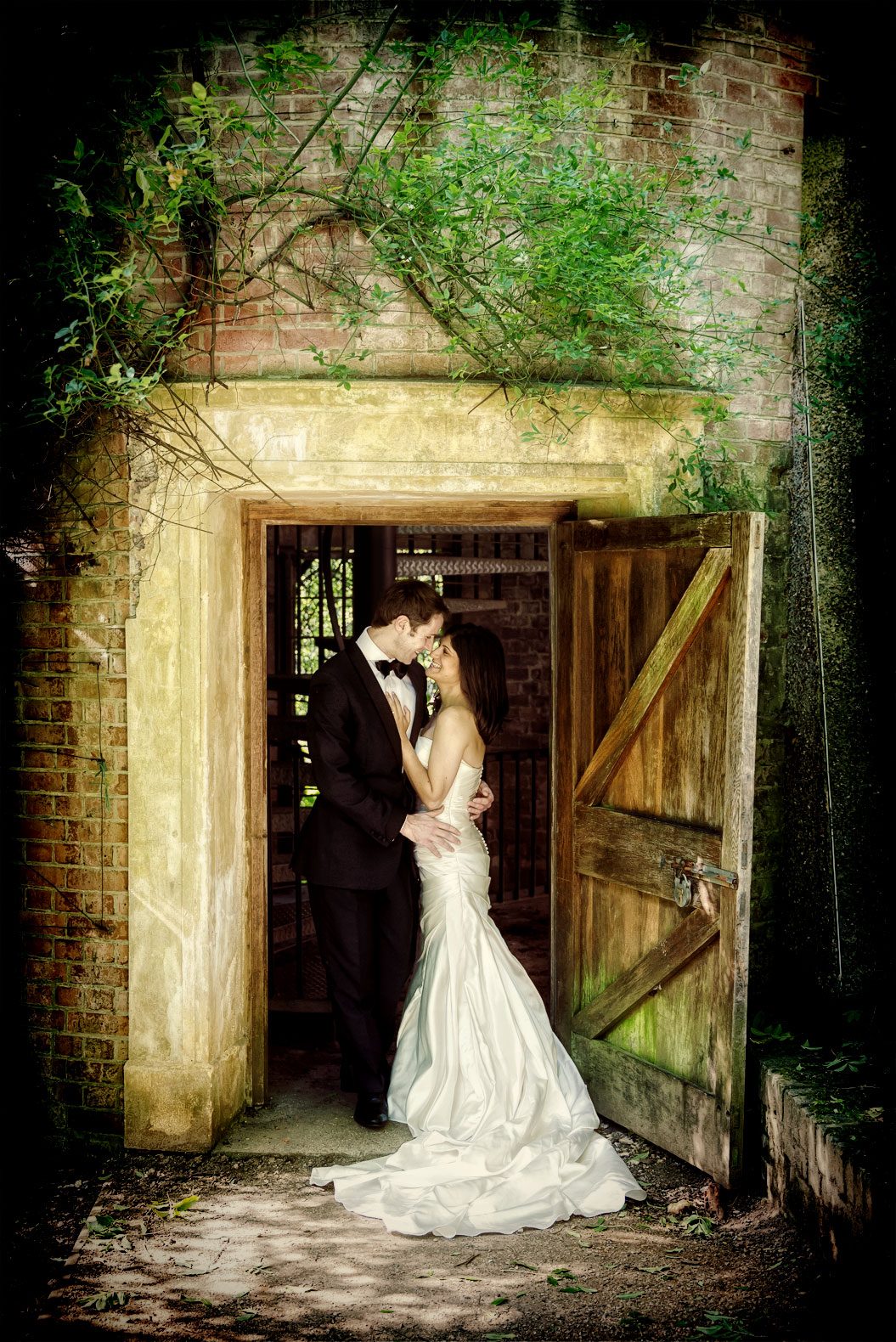 Now where did the couple shots come from and why? Usually on a wedding day we will find twenty minutes or so to take the couple away, either around the wedding or reception venue, or outside whether that’s urban streets or countryside next to a manor house for example. With Daniele and Ben’s wedding the schedule unusually didn’t allow for this, so what we did was book off some time on a other day after their honeymoon.  Where? Round the corner from their flat in Hampstead, and why not! 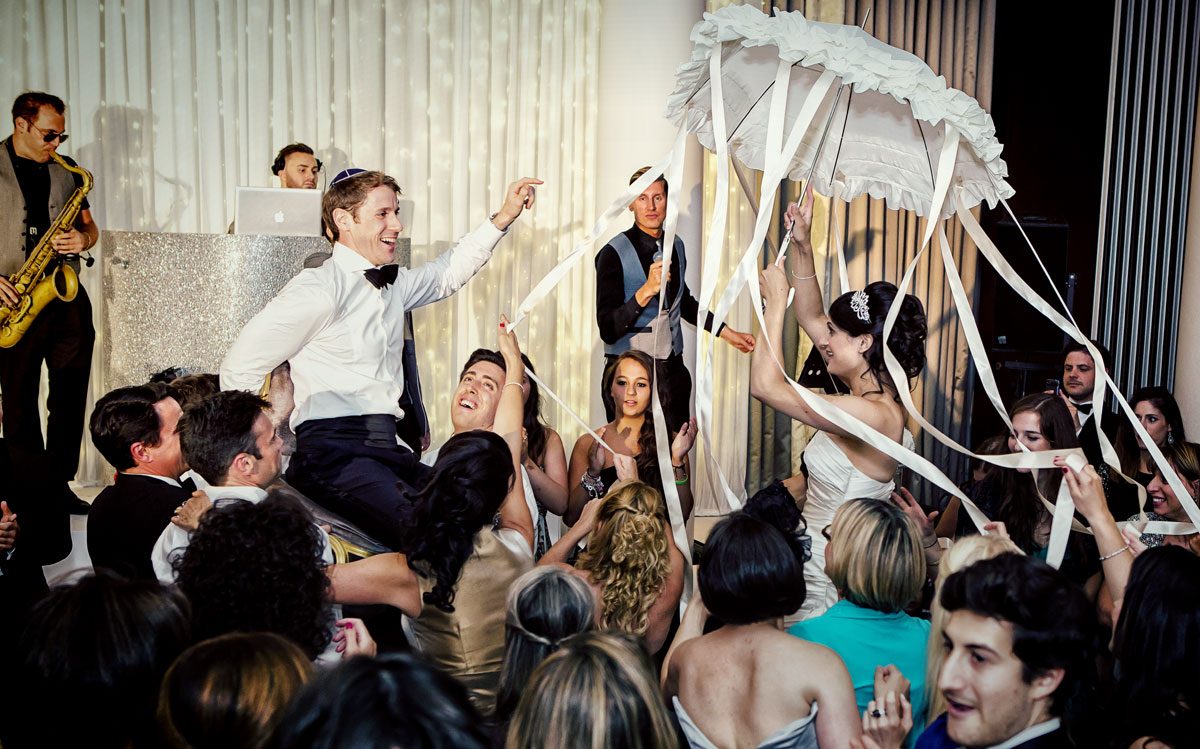 This part I did on my own, and I found it very relaxing and even more enjoyable knowing the couple weren’t worrying about the timeline of their wedding day. The sun came out too, so all in all perfect. It was nice too because I got to know the couple a better and also meet their dog. 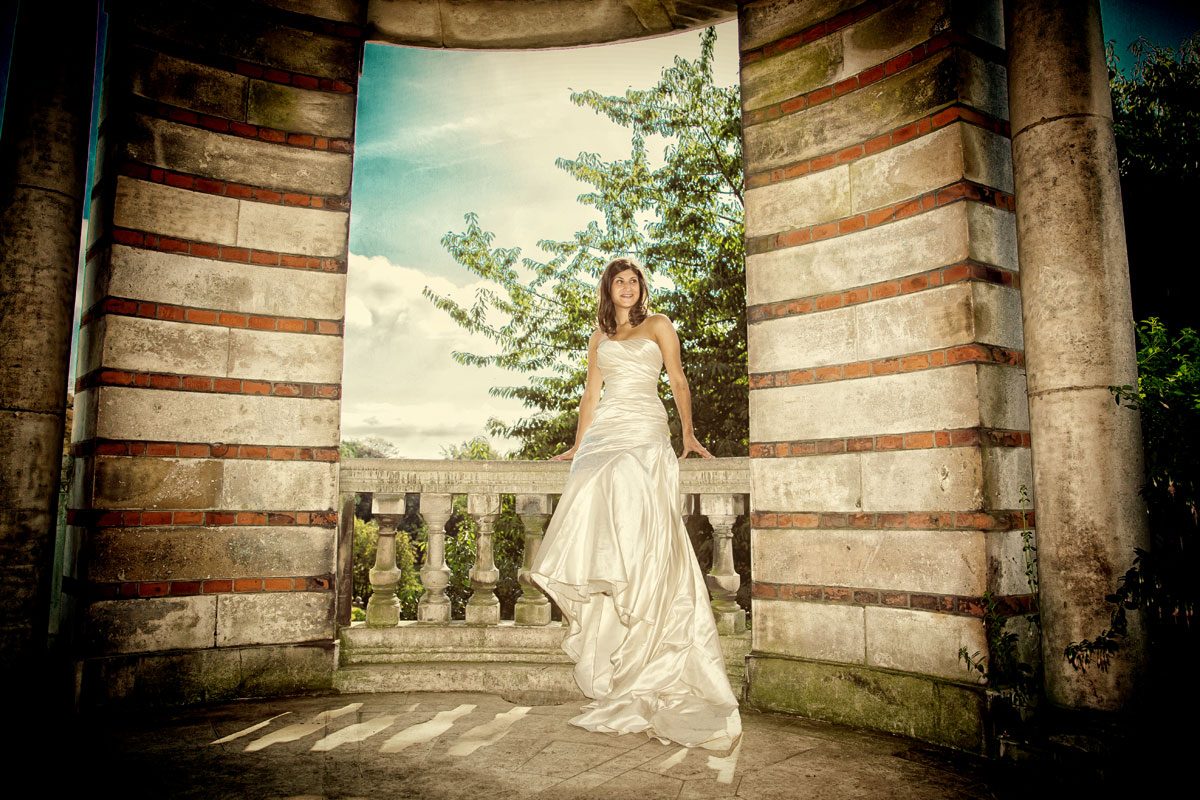 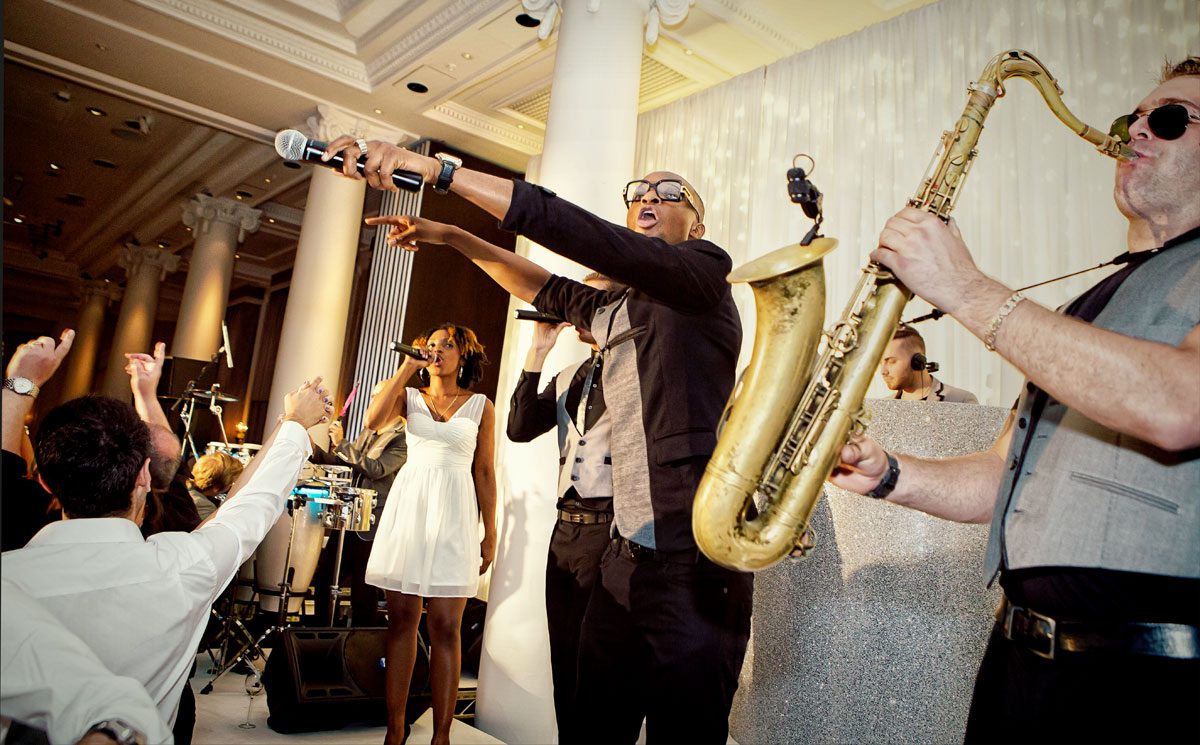 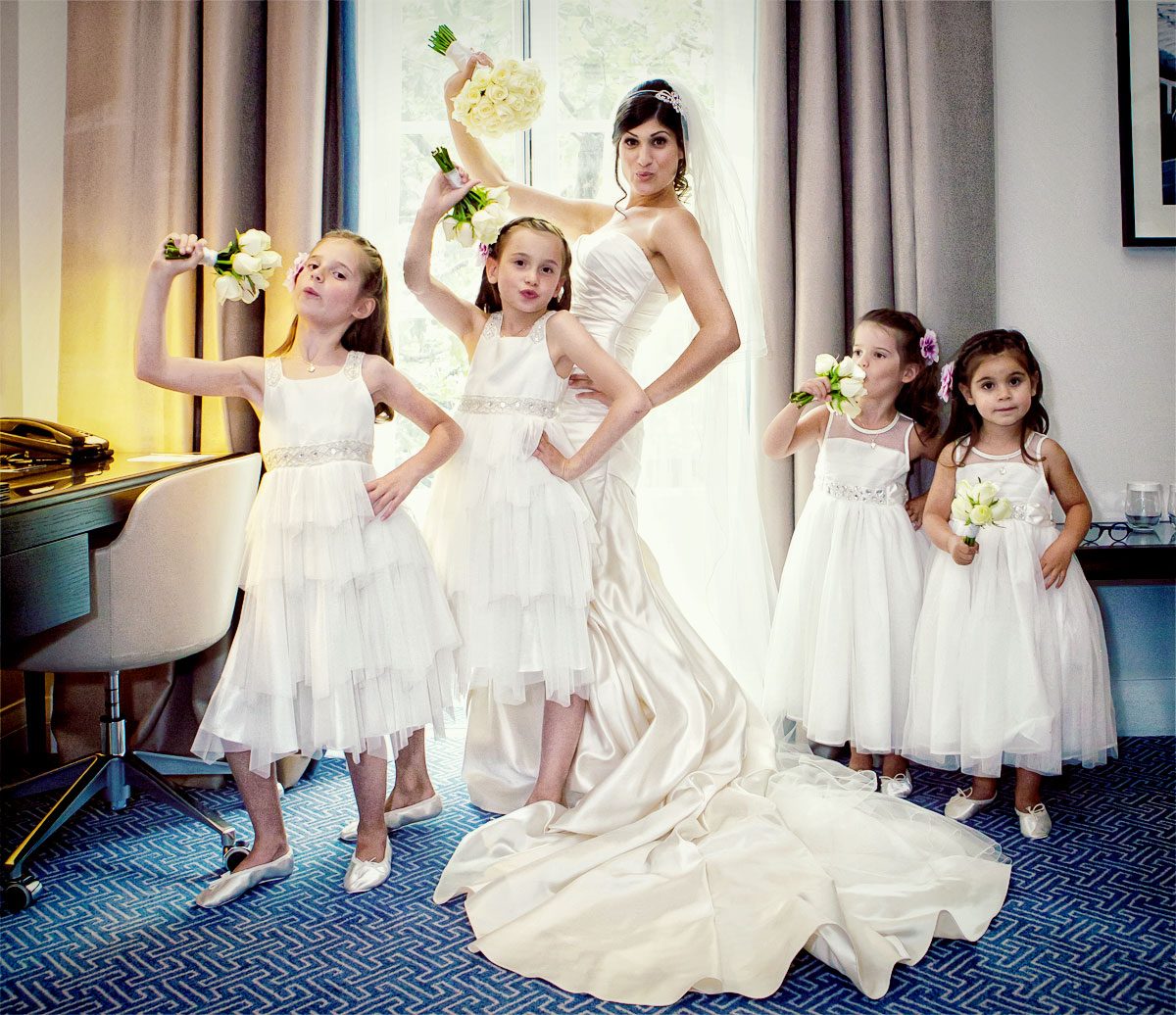 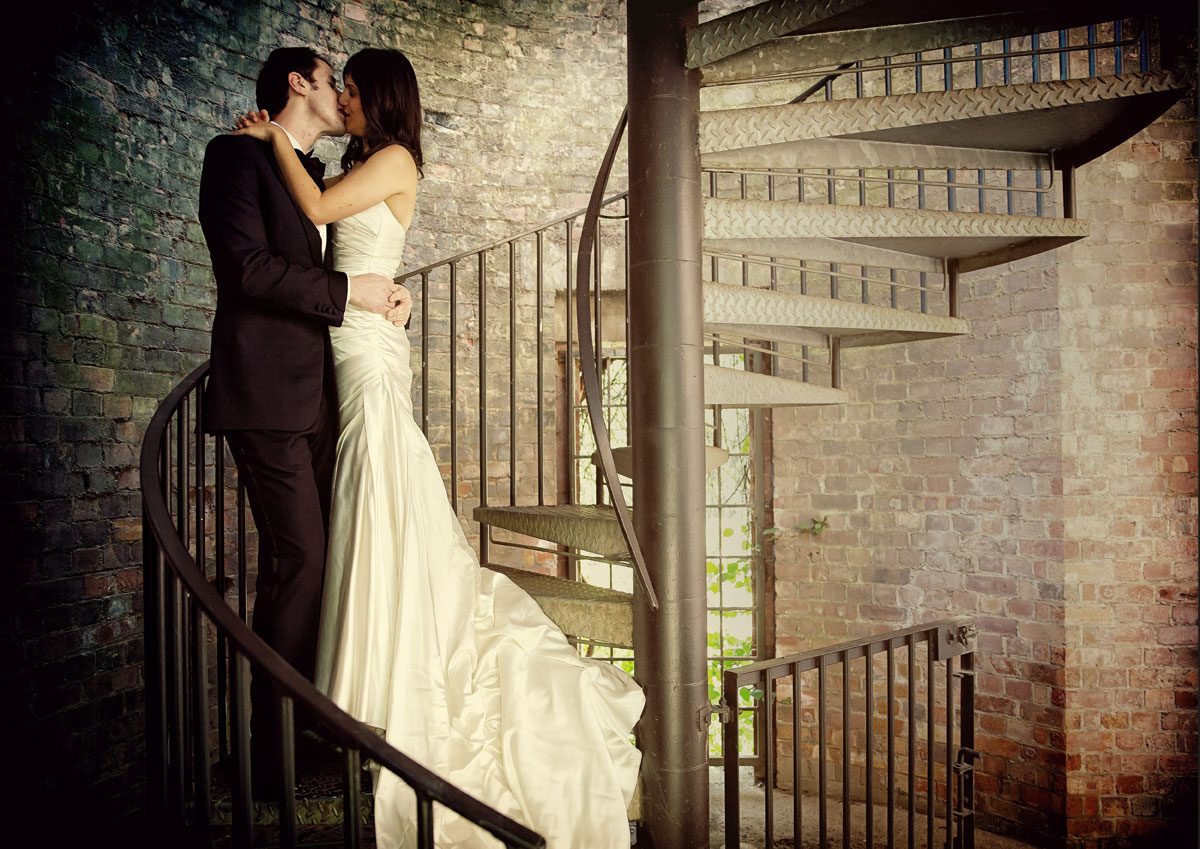