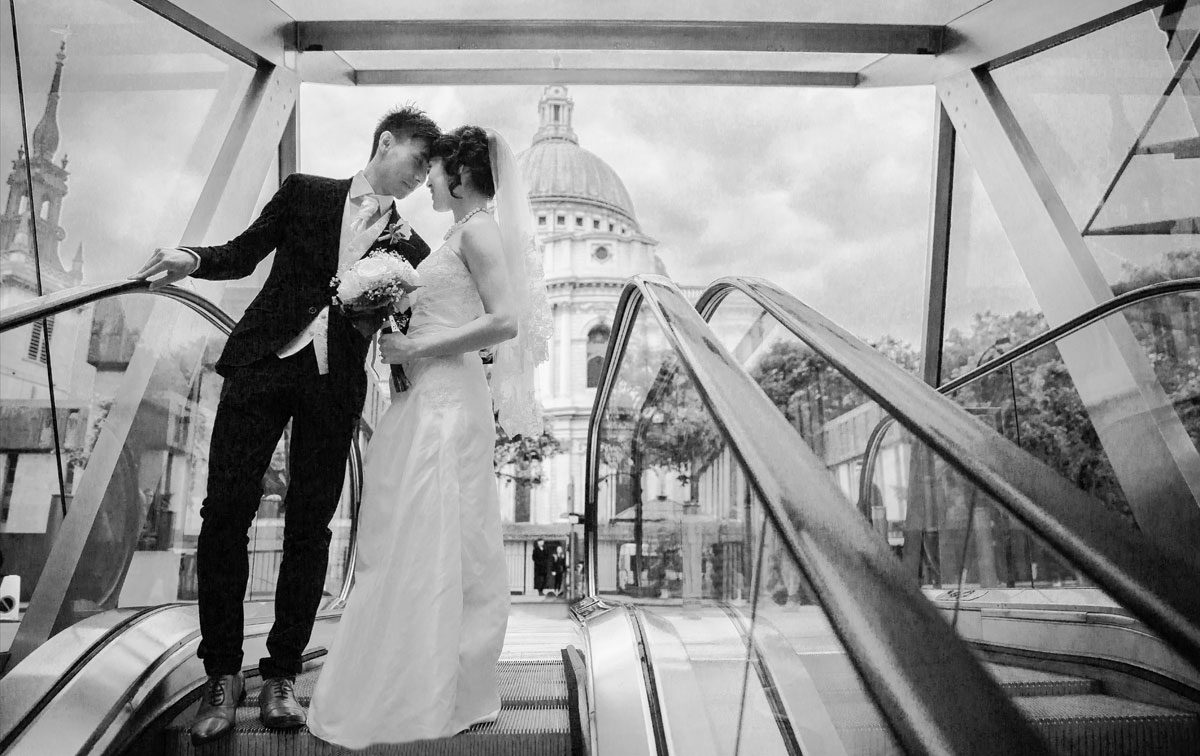 Another fantastic wedding day in central London for Louise and Kenton, and another chance for myself and Joanna to learn a little more of the history of the nation’s capital! 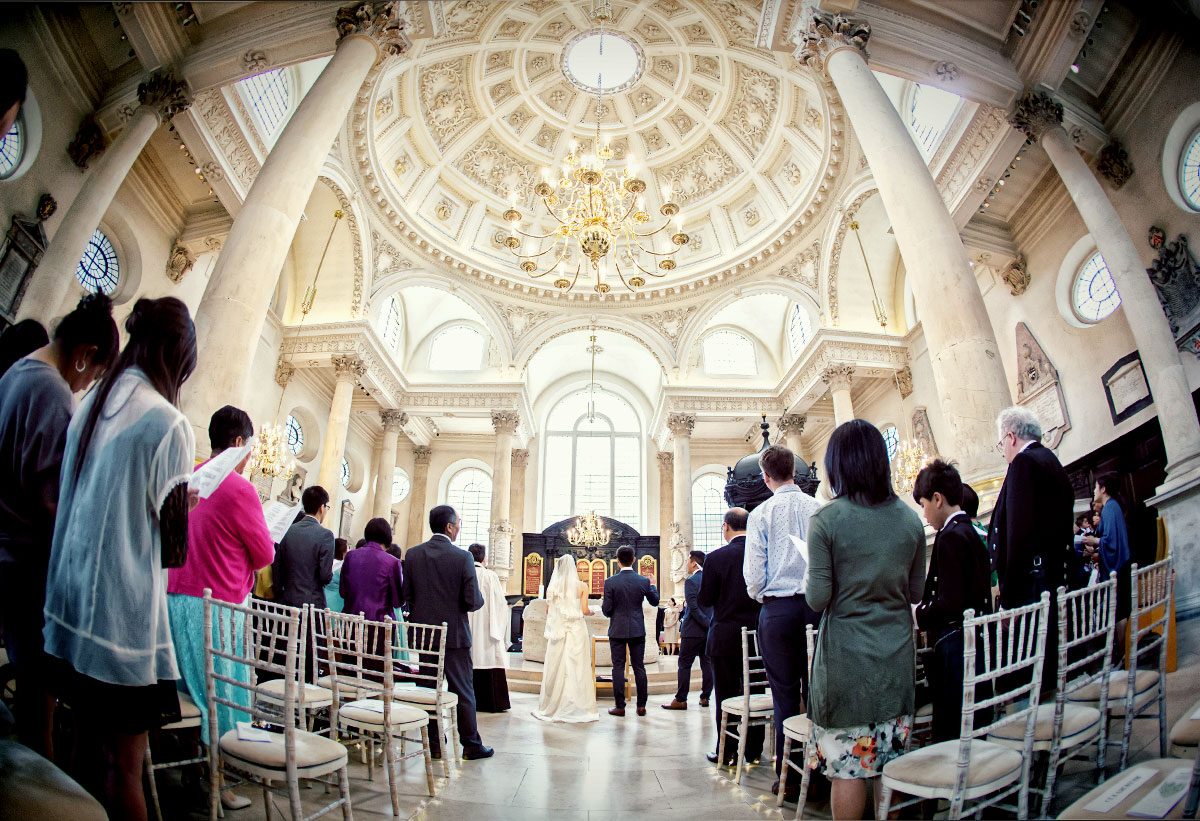 Our coverage started at St Stephen’s Walbrook right in the heart of the city near bank station. It’s a beautiful church designed by Sir Christopher Wren which served in many ways as a template for his later creation St Pauls Cathedral. It was interesting for us too as St Pauls wedding photographers to see how some of his architectural ideas took shape. 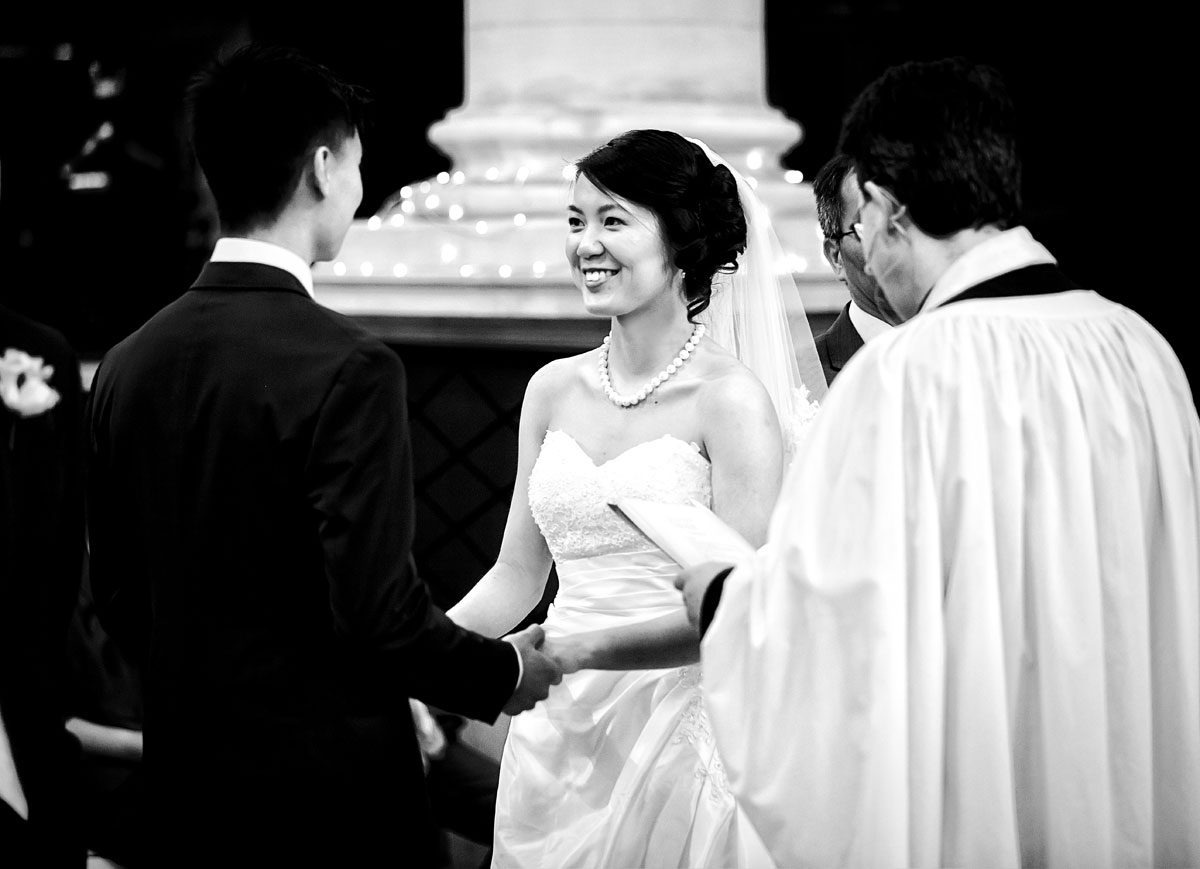 The altar sits in a fantastic circular area below Wren’s dome design, and wedding ceremonies tend to take place at the end of the aisle that faces the entrance doors. We are guessing though because it is circular it could be anywhere! There is also a very imposing pulpit that I’m grateful the clergy let me use to take some larger group shots.

Louise arrived in an open topped car with her bridesmaids and walked between a fairy light illuminated aisle to Kenton waiting near the altar. Musicians were ready to play them on and accompany all the hymns. It was by all accounts a passionate and heartfelt ceremony, and afterwards drinks and food were served for all at in the rear courtyard of St Stephens. 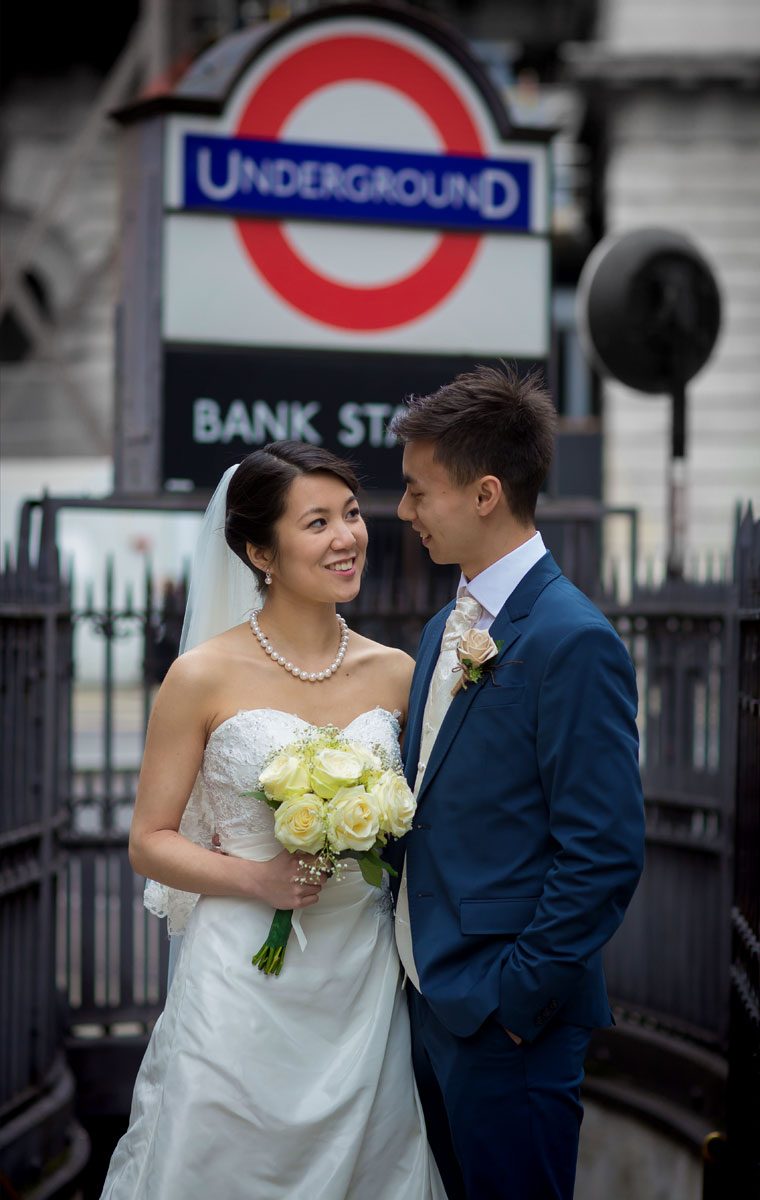 Once the guests had made their way to the reception venue Joanna and I spent a little time on foot with the bride and groom taking some central London shots around Bank Stanton, and heading towards St Pauls, great fun.

The wedding reception venue was the lovely Corney and Barrow restaurant and bar in Paternoster Square. Personally I’m a big fan of this area and I was delighted to photograph the bouquet toss here and find some deckchairs for Louise and Kenton to sit in with St Pauls behind them. 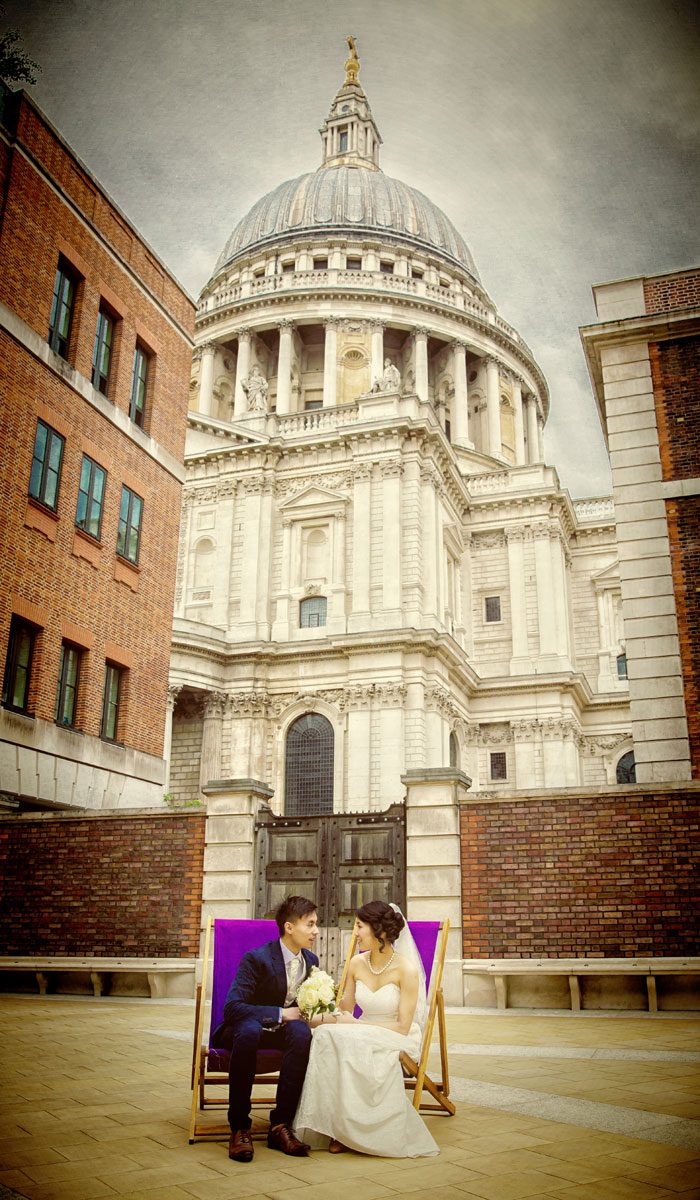 While guests sipped complimentary drinks and canapés, the bride and groom and their closest family enjoyed a traditional Chinese tea ceremony in an adjoining room.

Dinner was served by the friendly and efficient Corney & Barrow team followed by speeches, cutting of the wedding cake and dancing the evening away in the shadow of St Pauls. By all accounts another fantastic central London wedding day. 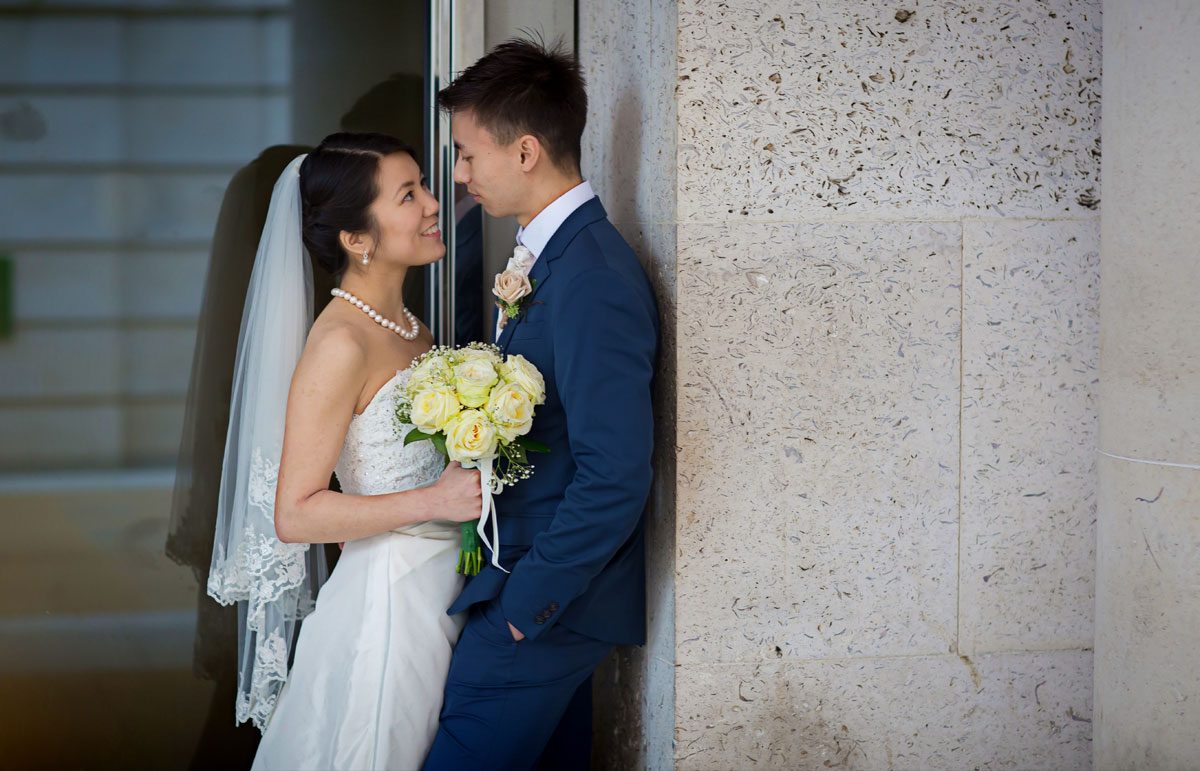 Wedding day at Asia House and Sketch in central London 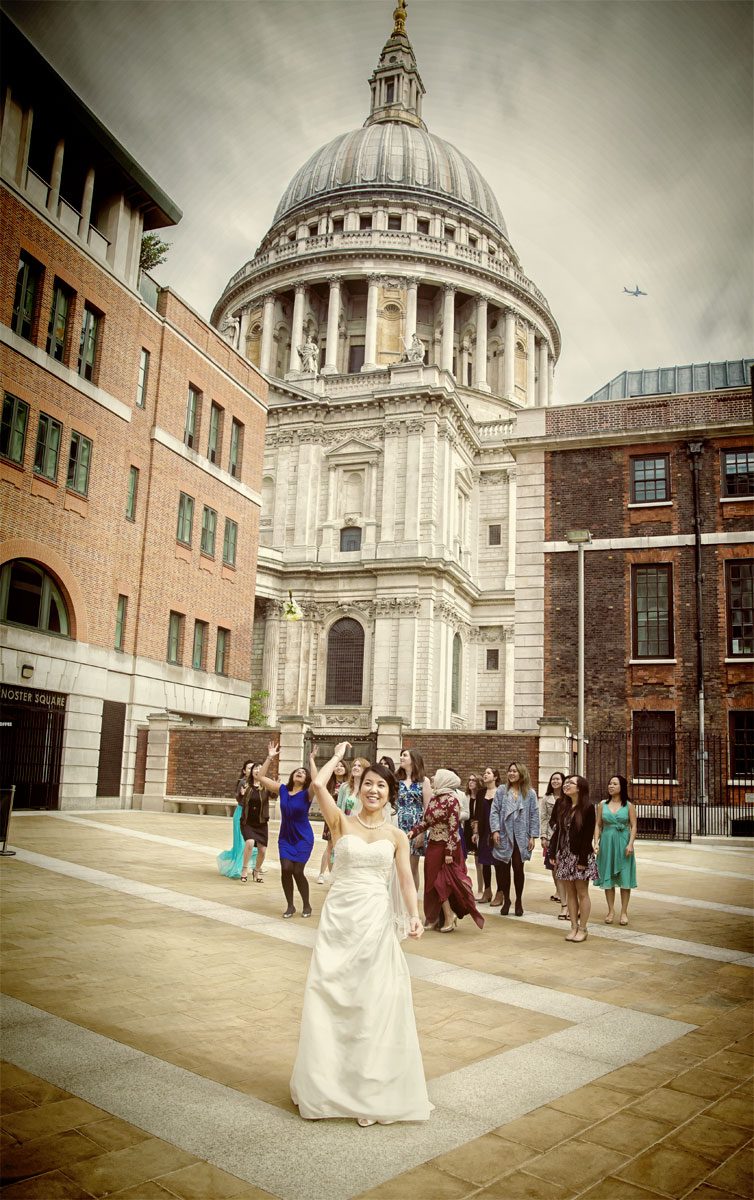