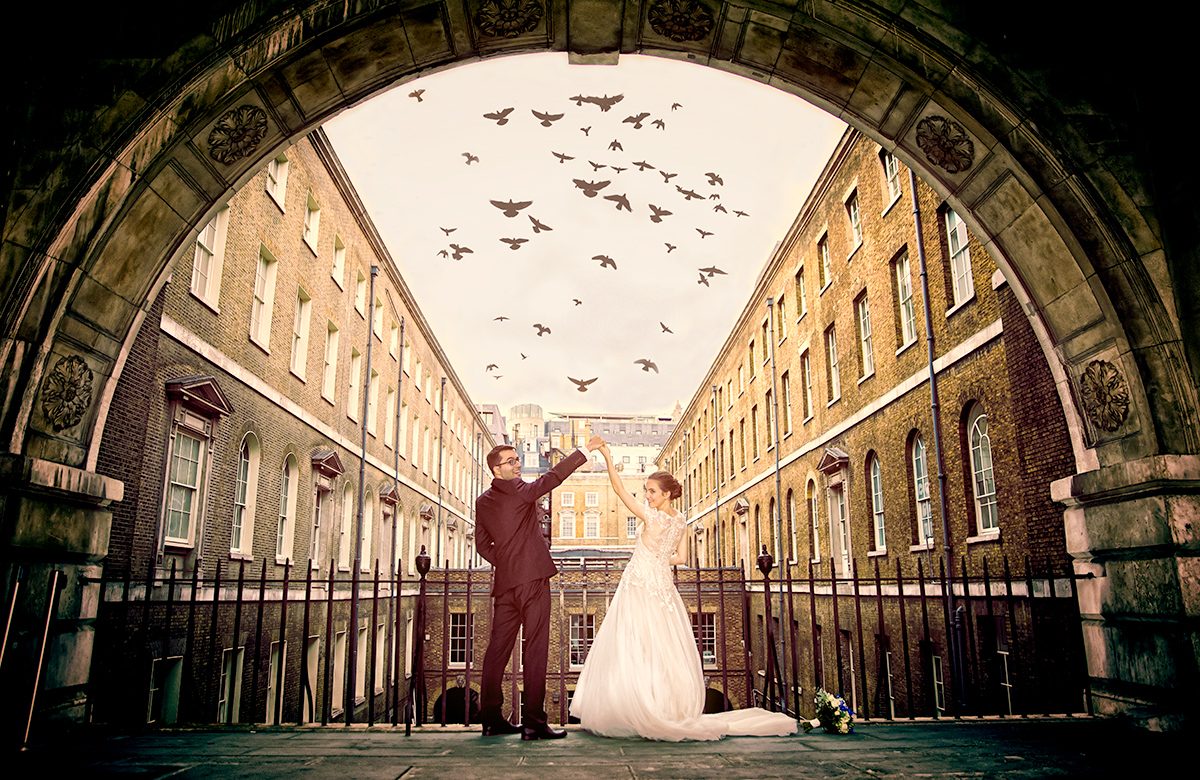 It’s been a really multicultural and international year for us so far with our wedding photography. This particular big day was a very Swiss affair, with some of that Alpine magic coming into play from our lovely couple S and A. 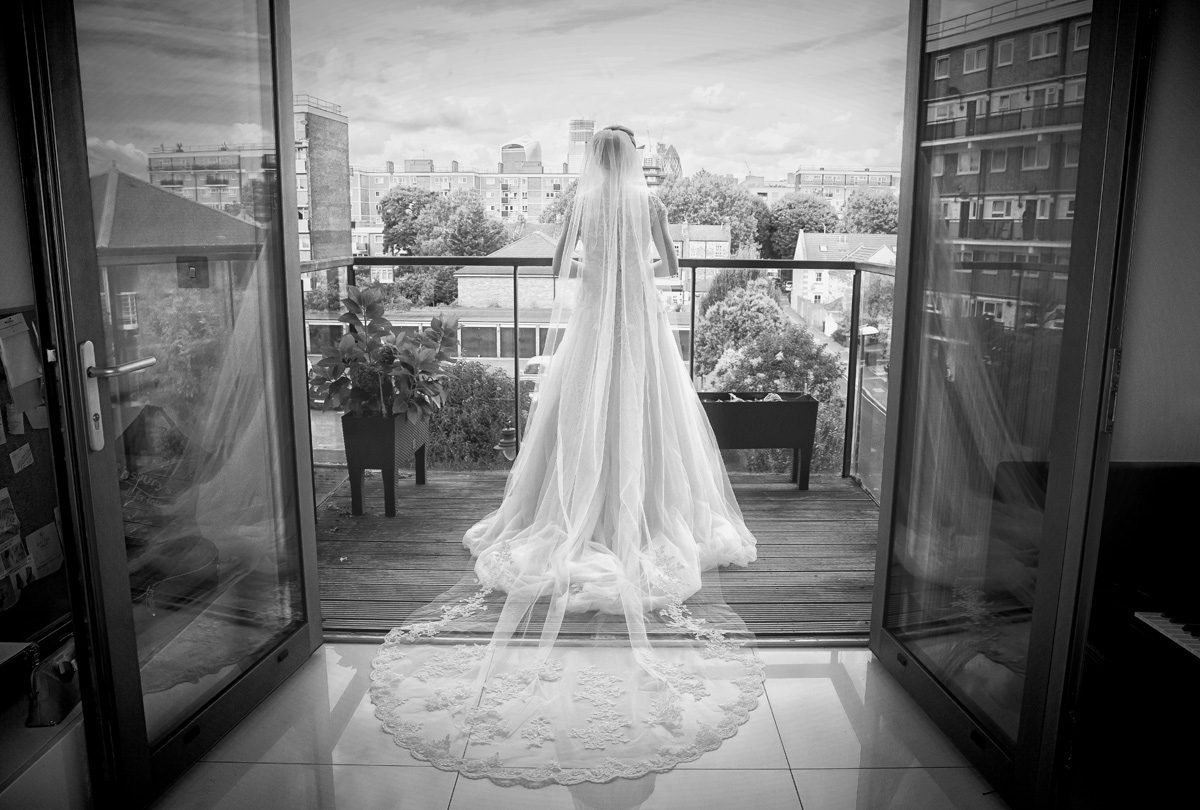 The day began with coverage of our bride in the couple’s apartment in Bermondsey, with mum and bridesmaids in attendance. 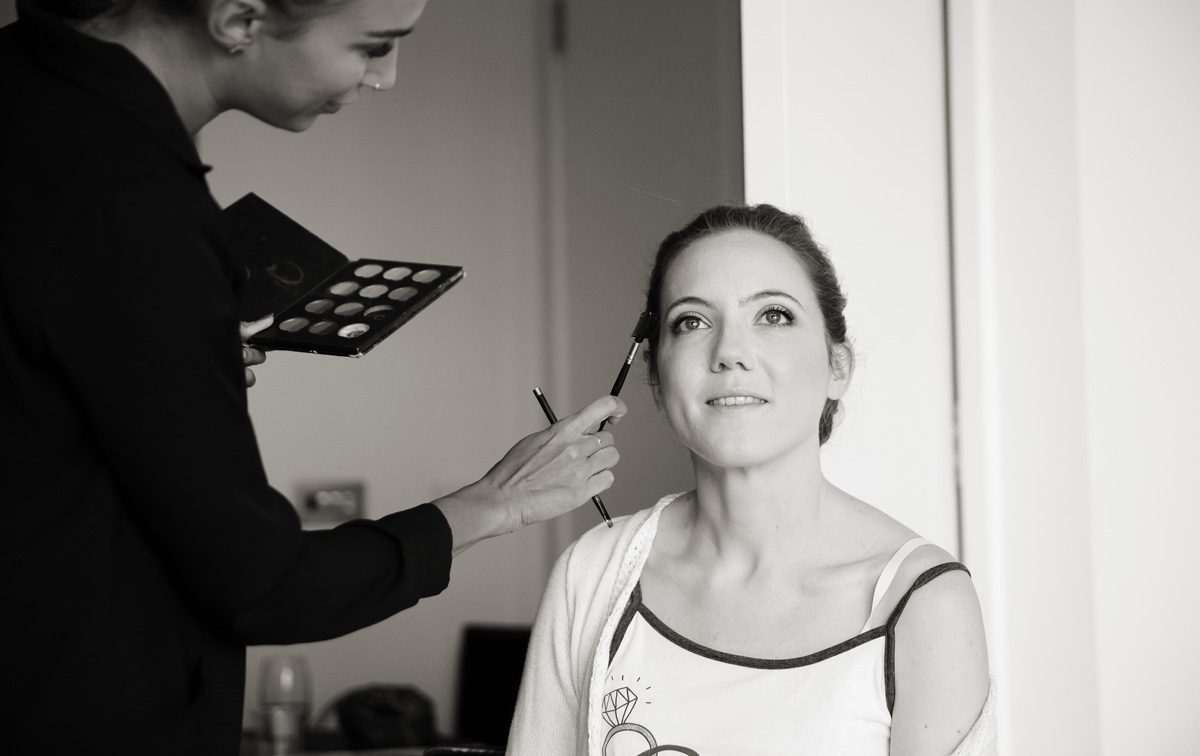 When I  went on their balcony to take some shots I saw something that definitely made me smile, there it was in the distance, the main building in view – The Gherkin. Everyday these guys look upon that architectural marvel, no wonder they chose it for their wedding reception! 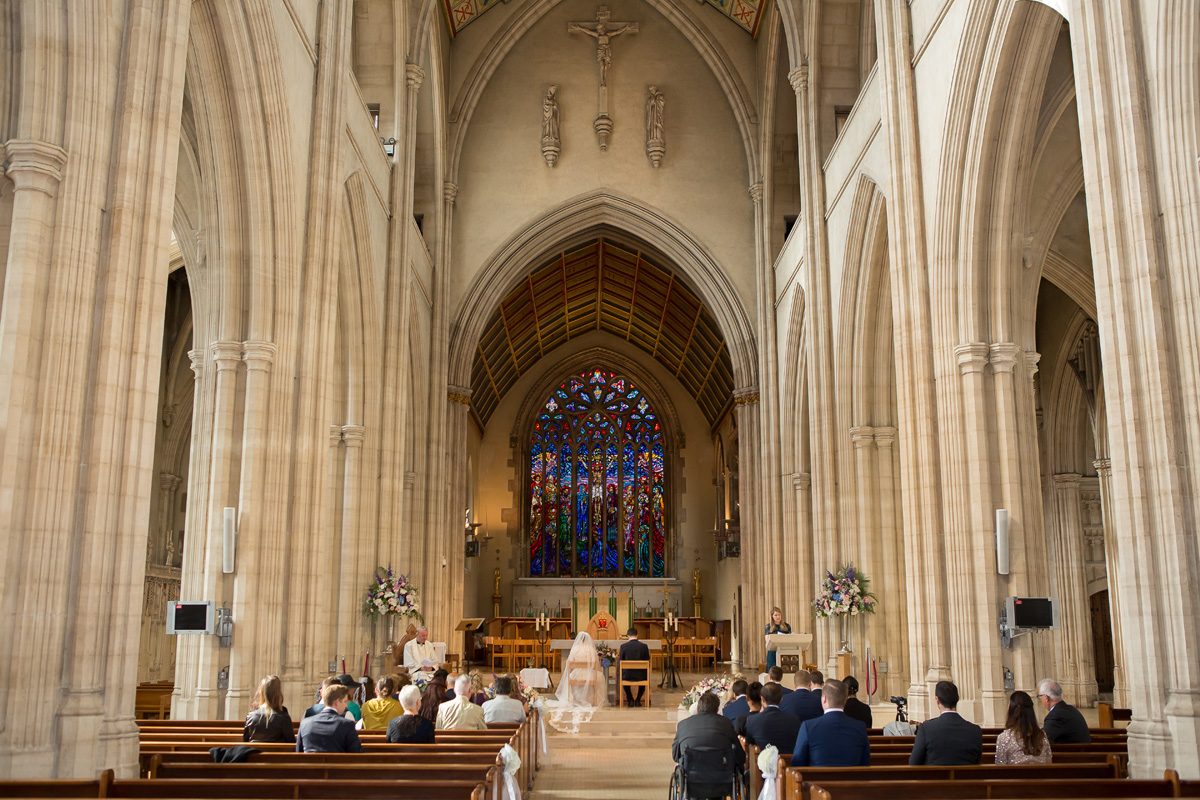 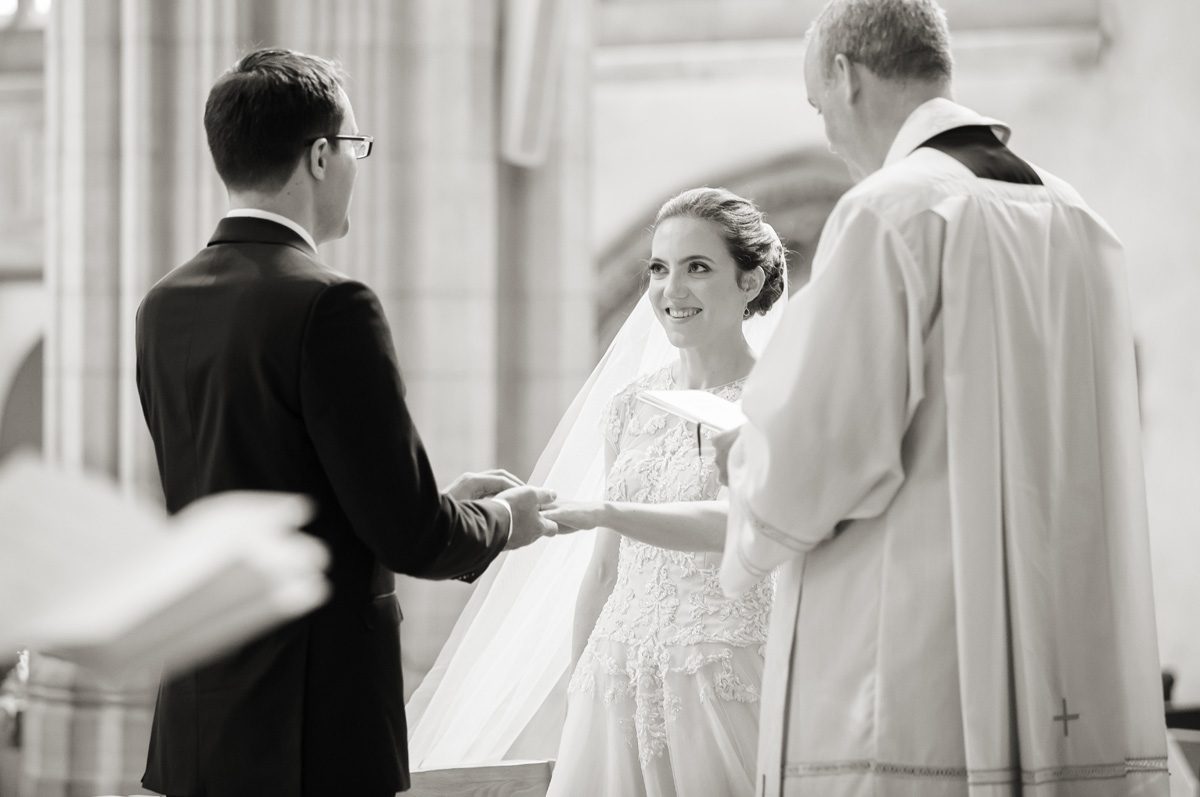 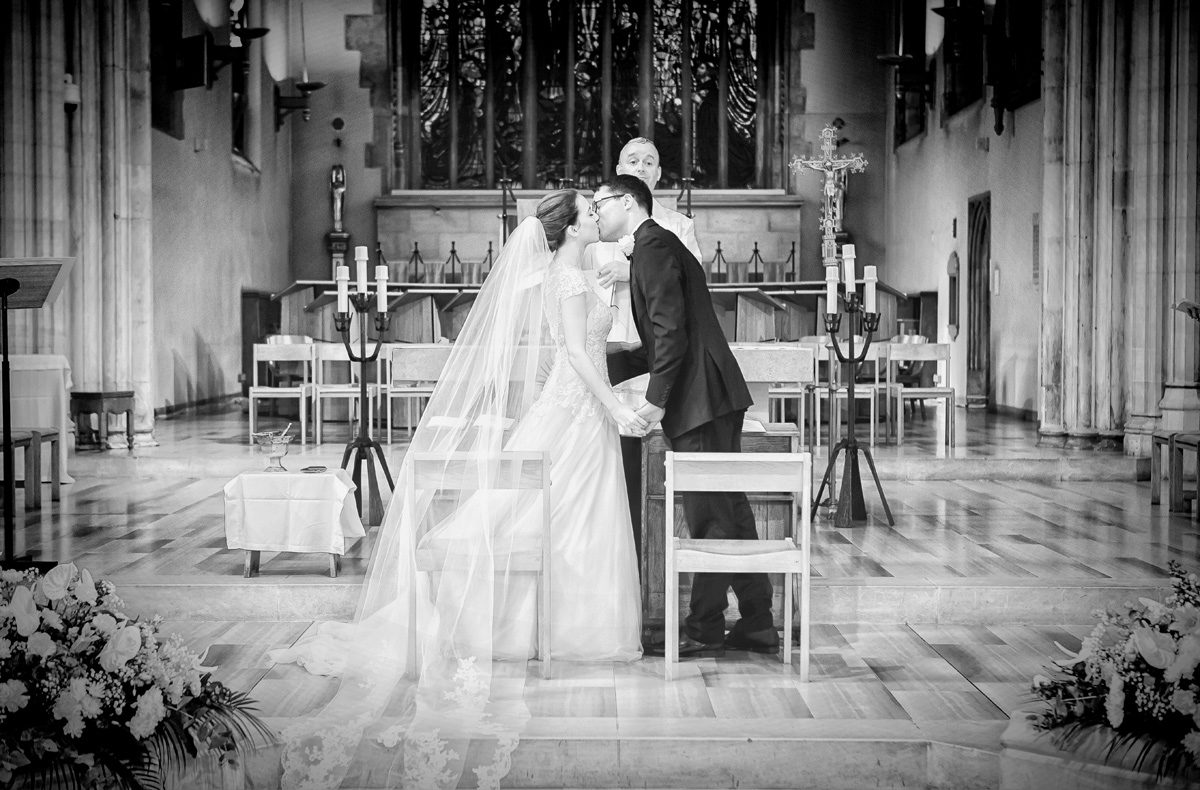 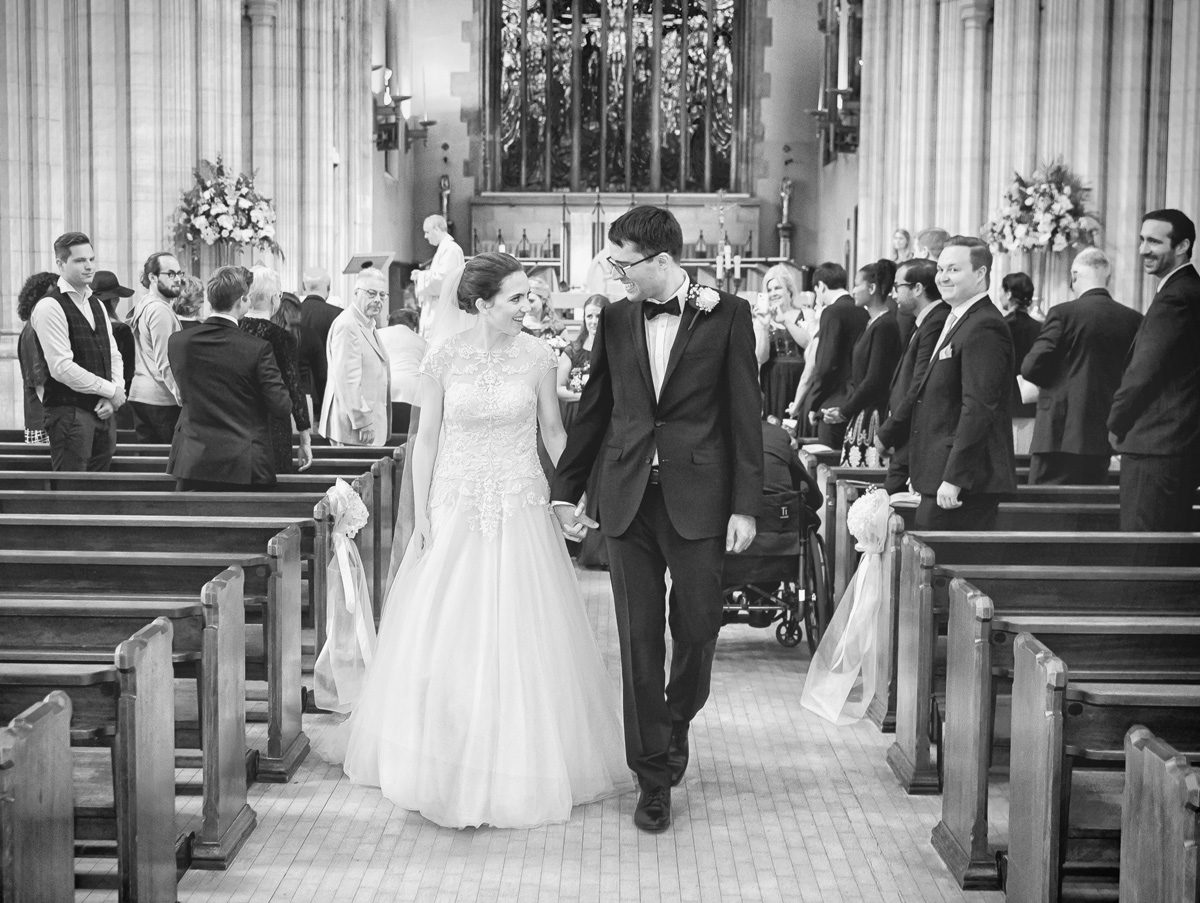 While I documented the excitement of the morning, Joanna was at St George’s Cathedral to capture the groom’s preparations and his ‘meet and greet.’ 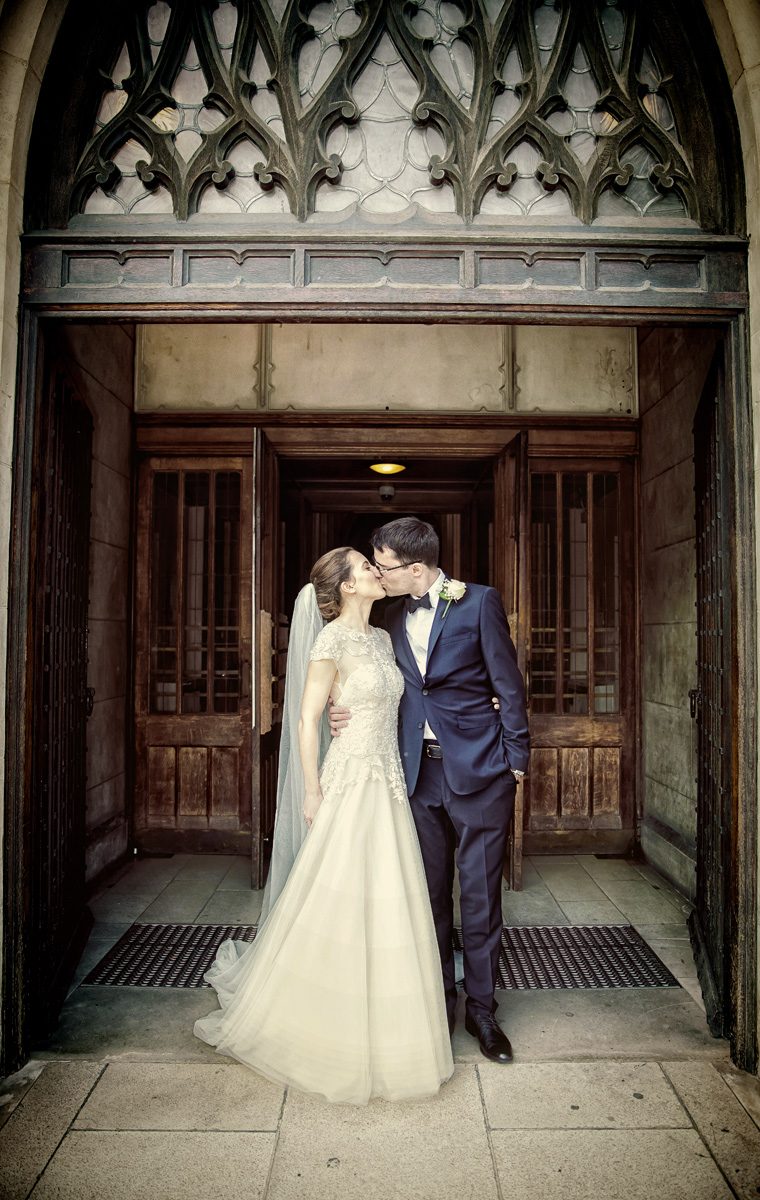 We’ve photographed at St George’s near the Imperial War museum a few times now, and it really is a grand structure. 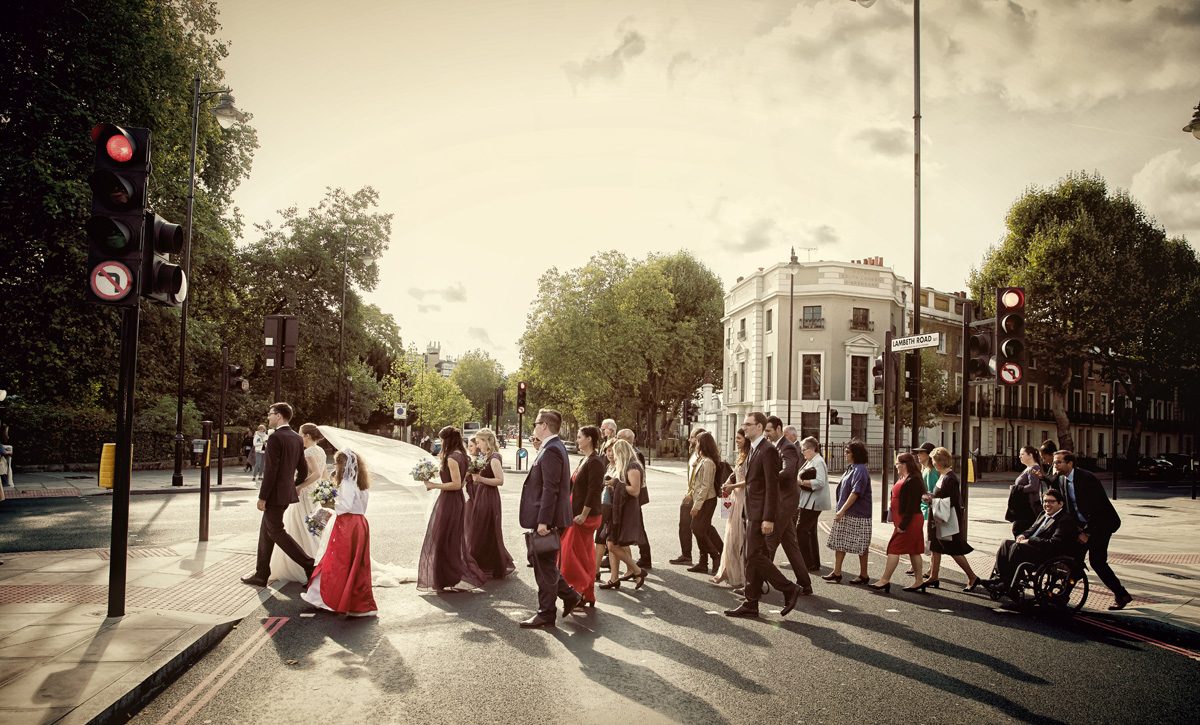 St George’s Cathedral itself was built in 1848, but was extensively damaged in the blitz of the second world war, and had to have a large amount of rebuilding. 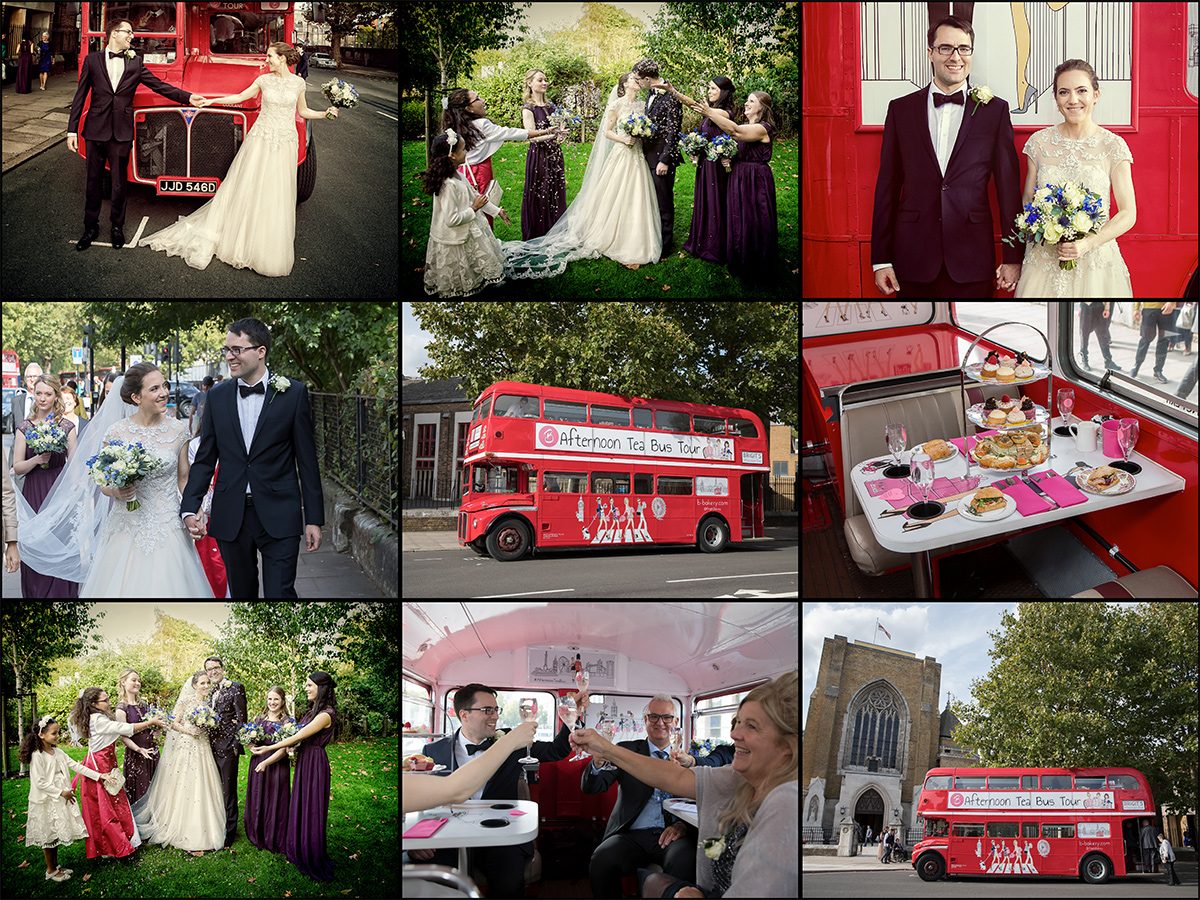 It looks truly striking and magnificent today, no wonder couples enjoy their wedding ceremonies there.

After the ceremony close family went to the park next to the war museum for some group photos, and then it was all aboard an old London Routemaster bus for a scenic tour before arriving at The Gherkin. 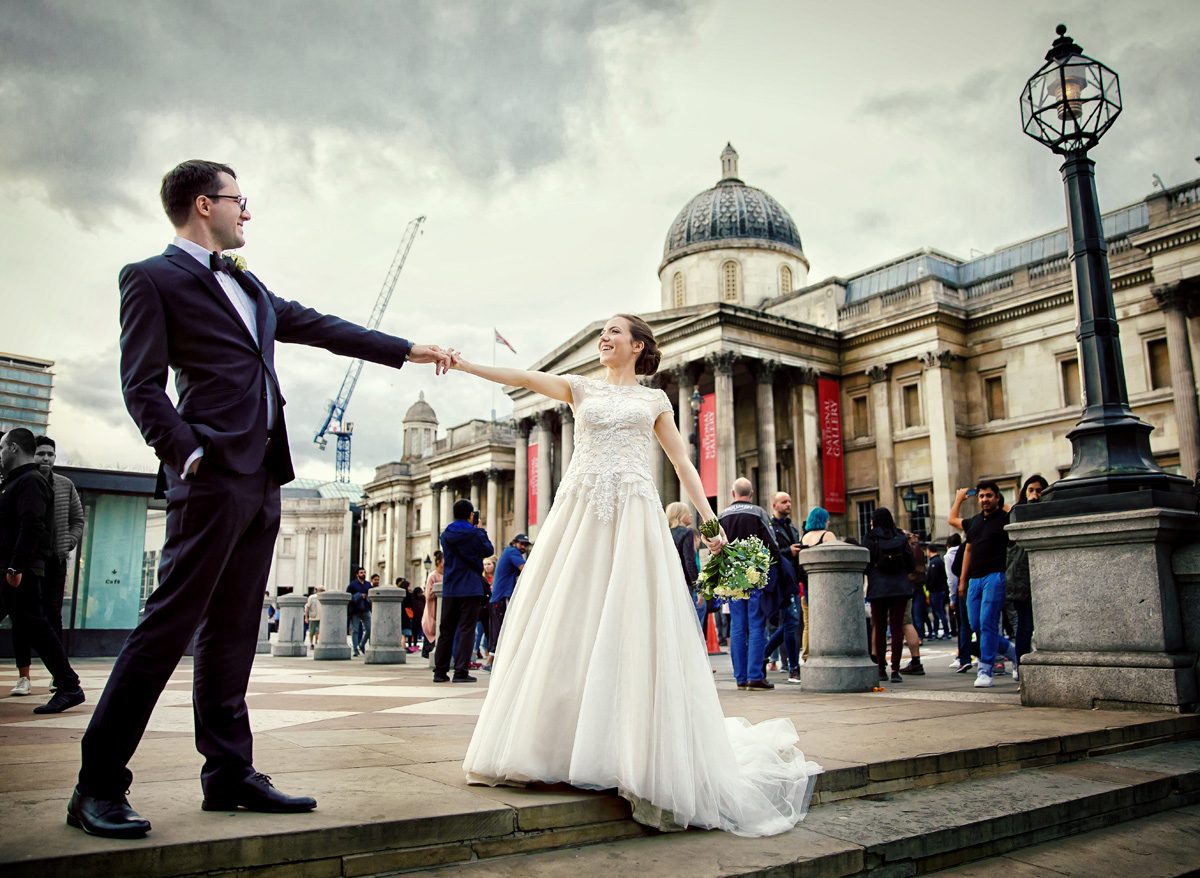 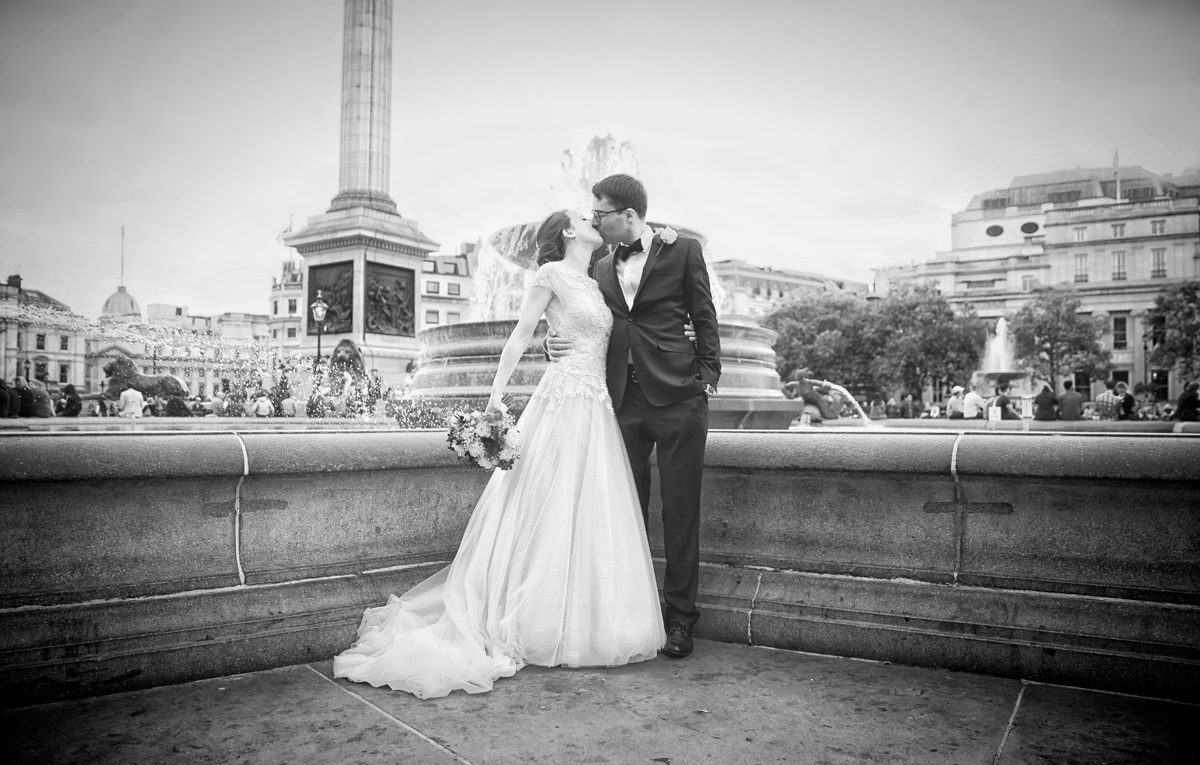 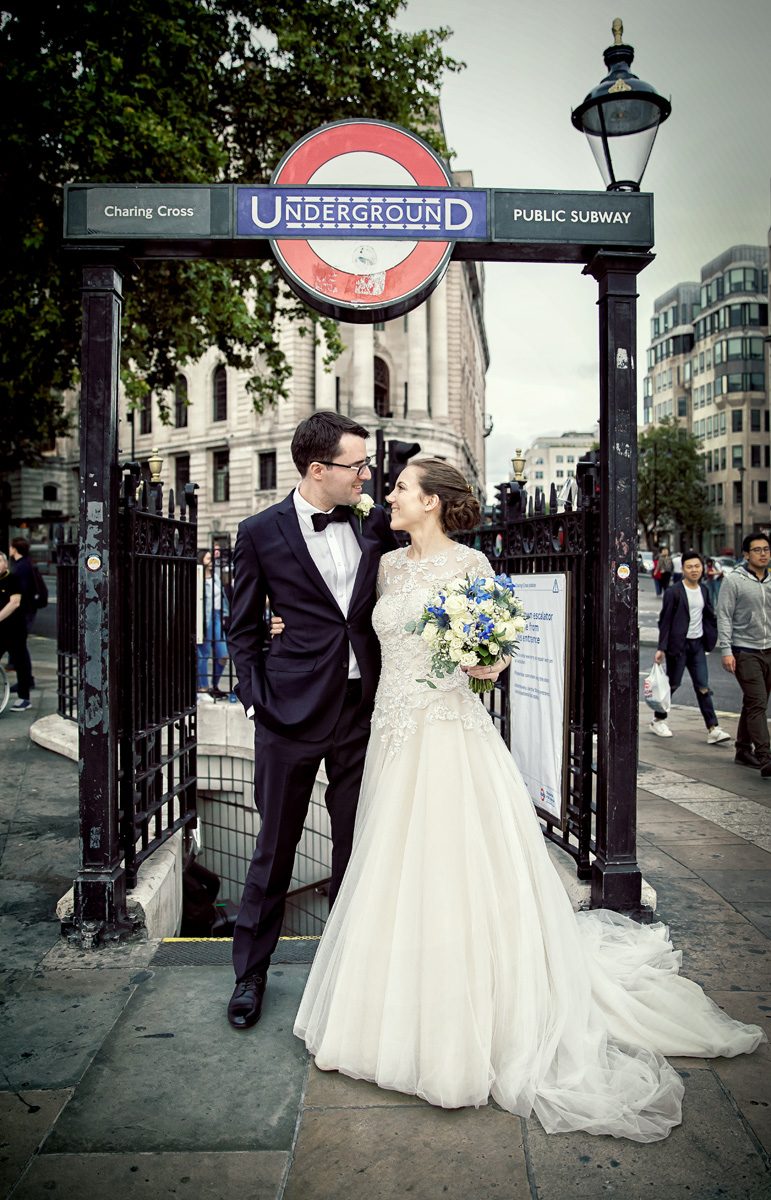 Now this was no ordinary route master wedding bus. I would have to say it was our favourite one ever because it was run by Bridget’s Bakery, and it was fitted out with lovely tables and cake and sandwich displays for enjoying the best of the bakery, while taking in the best of London on the way. Brilliant! 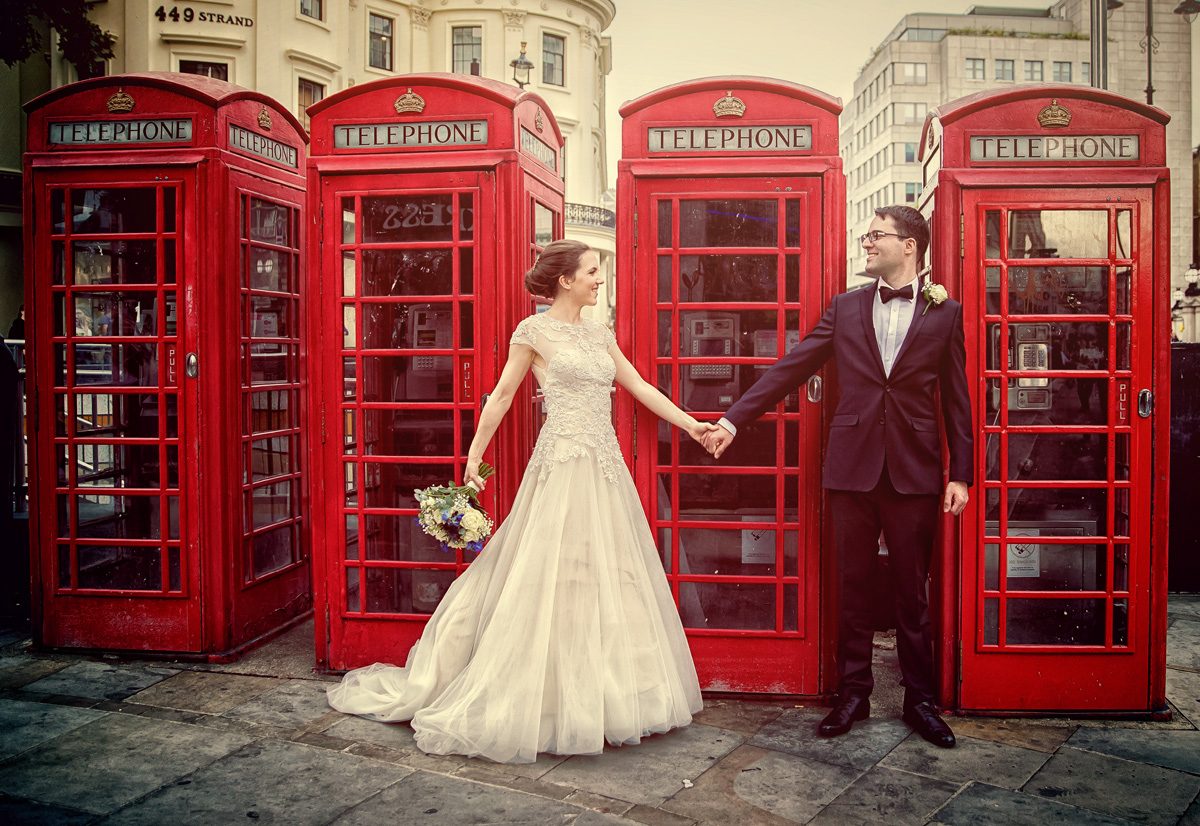 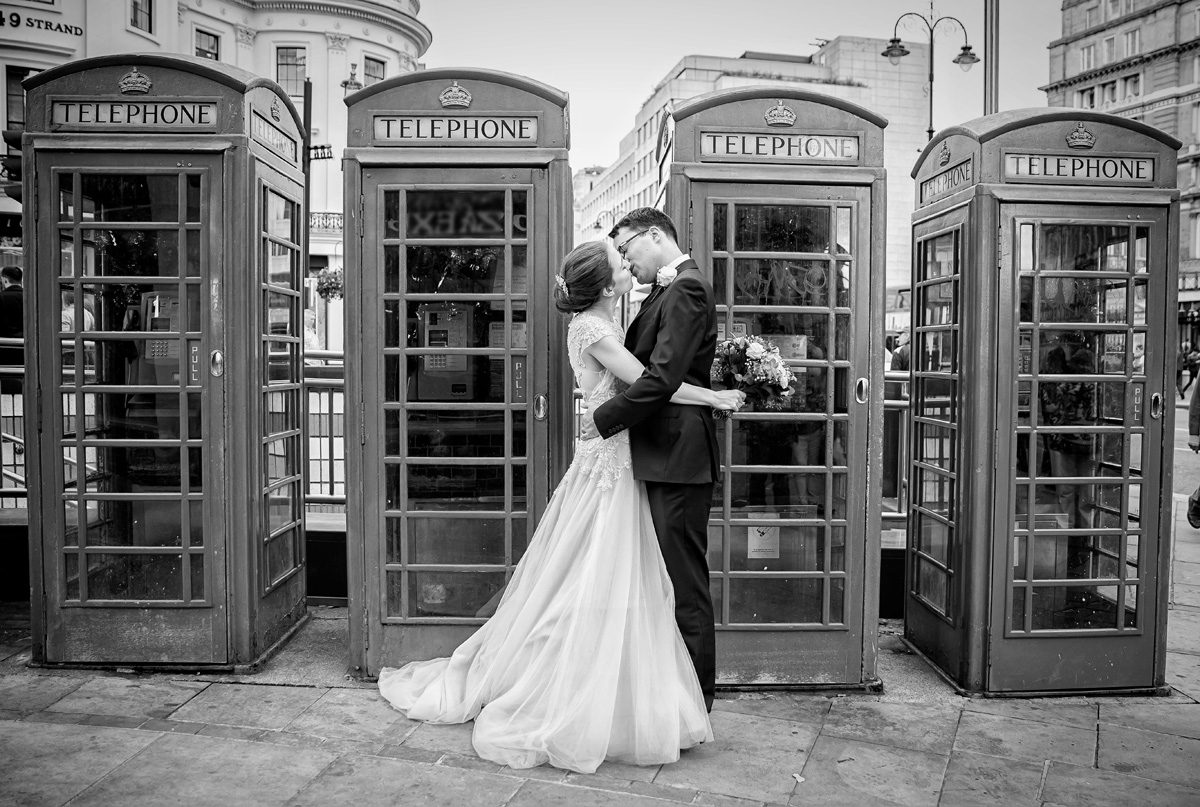 I got off at Trafalgar Square with S and A for some couple shots in and around the area, while Joanna travelled with the rest of the part to 30 St Mary Axe, also known popularly as The Gherkin building. 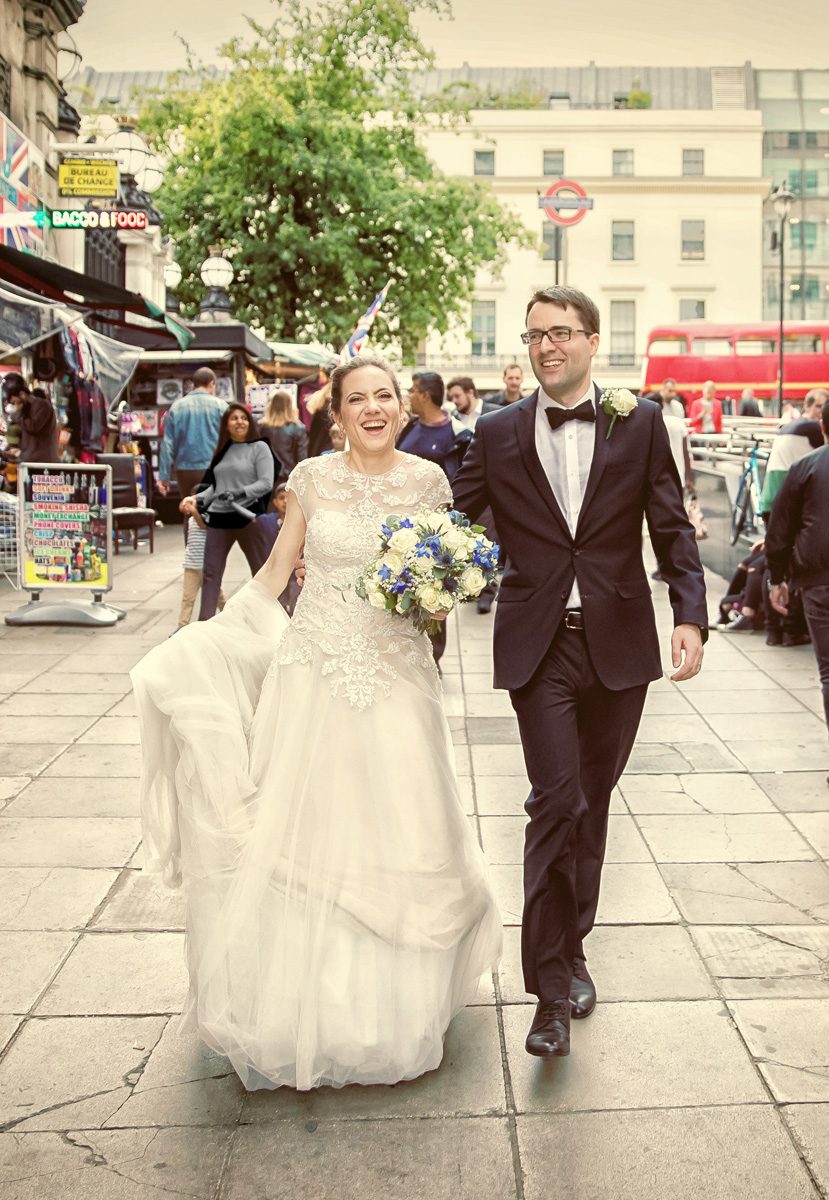 Something to remember for any couple planning to travel around central London with your wedding photographer on a Saturday: it’s going to be very public and very busy. Actually that is one of the highlights that you really need to embrace to get the best out of the scenario. 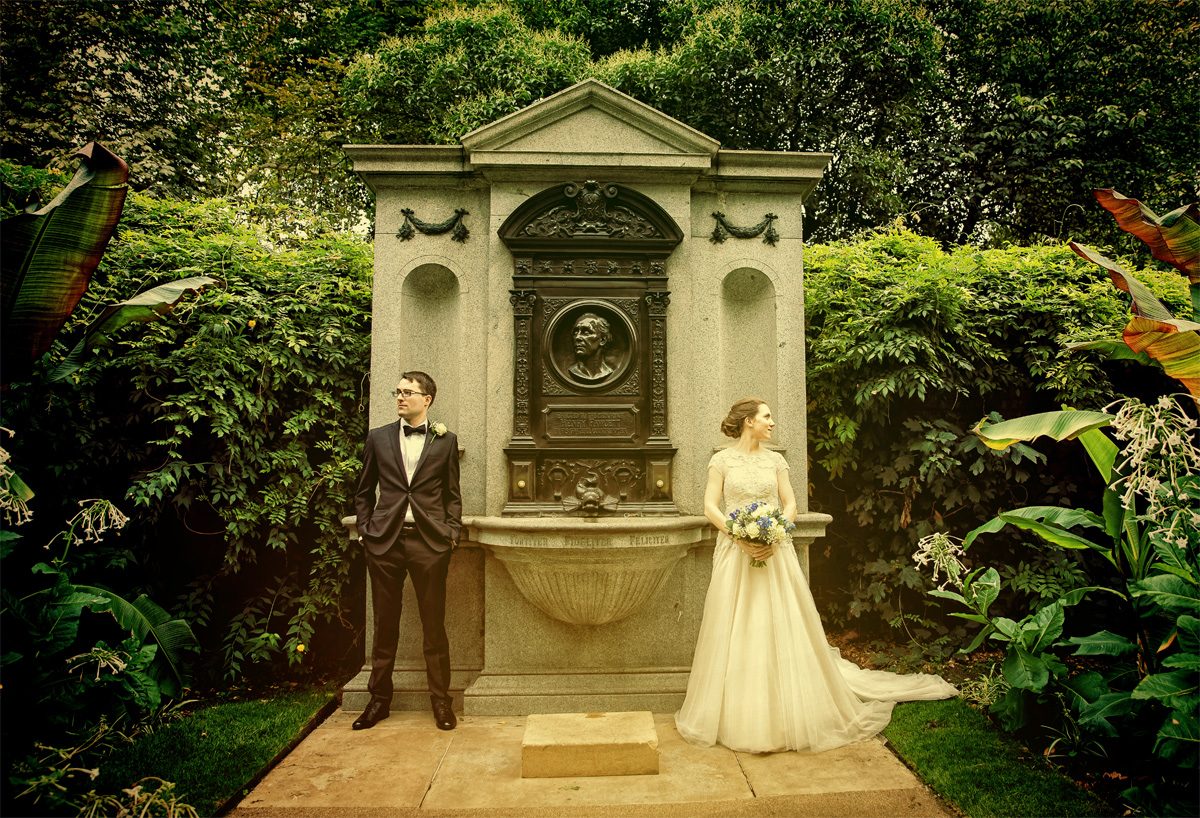 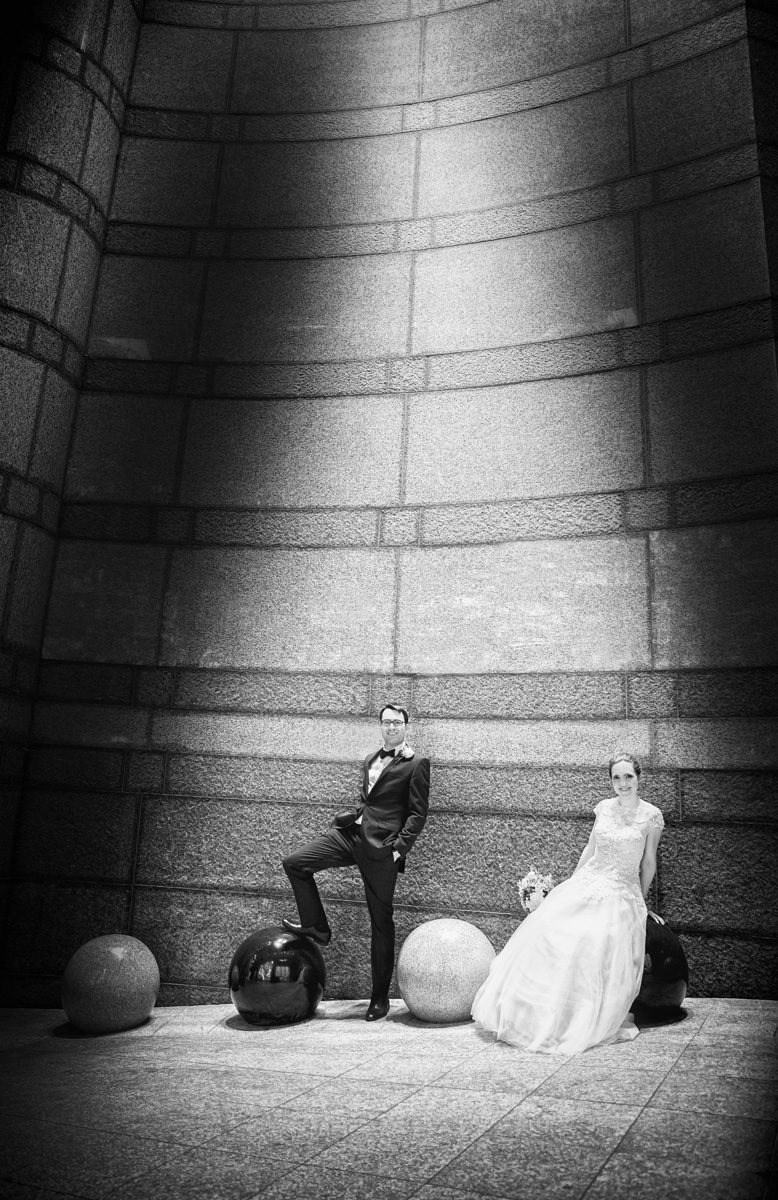 If this is your plan you will find it’s pretty special to be applauded and congratulated as you walk the streets. Everybody loves a wedding couple, trust me I have seen it a great many times.

The other things to bear in mind is that time and opportunity is limited. You have on average 20 to 30 seconds at most to get that shot because of opportunity and the general public. You may well be moved on by security too as many places actually require a pre paid license for professional photography. 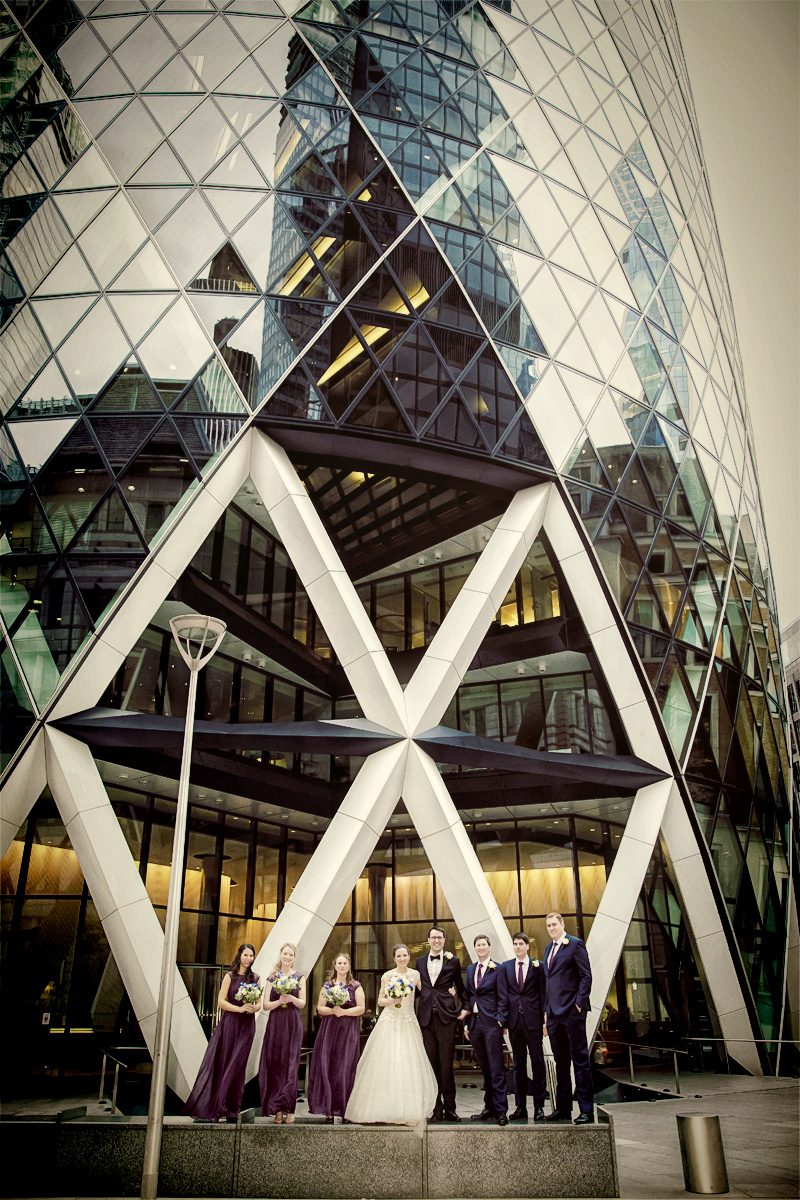 There are ways around this sometimes, and if there’s a way around it we know what it is! 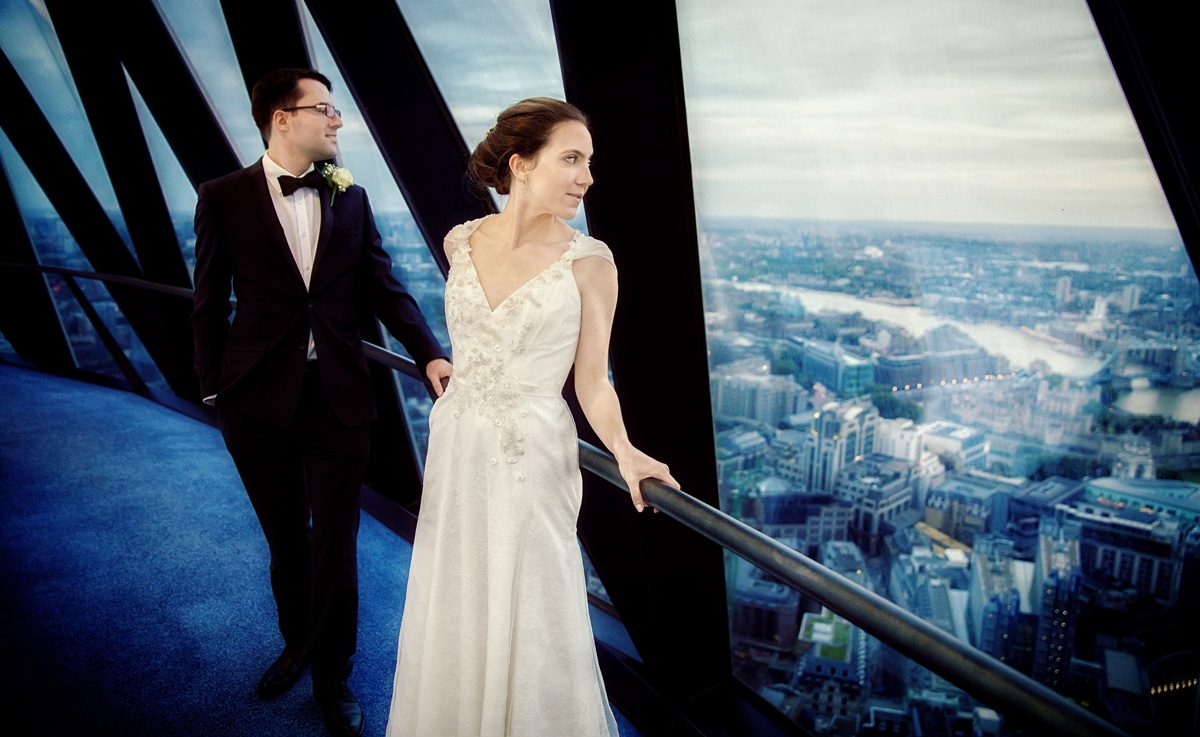 We had fun on The Strand, down to the embankment and finishing on Waterloo Bridge, before  hailing a cab back to The Gherkin. 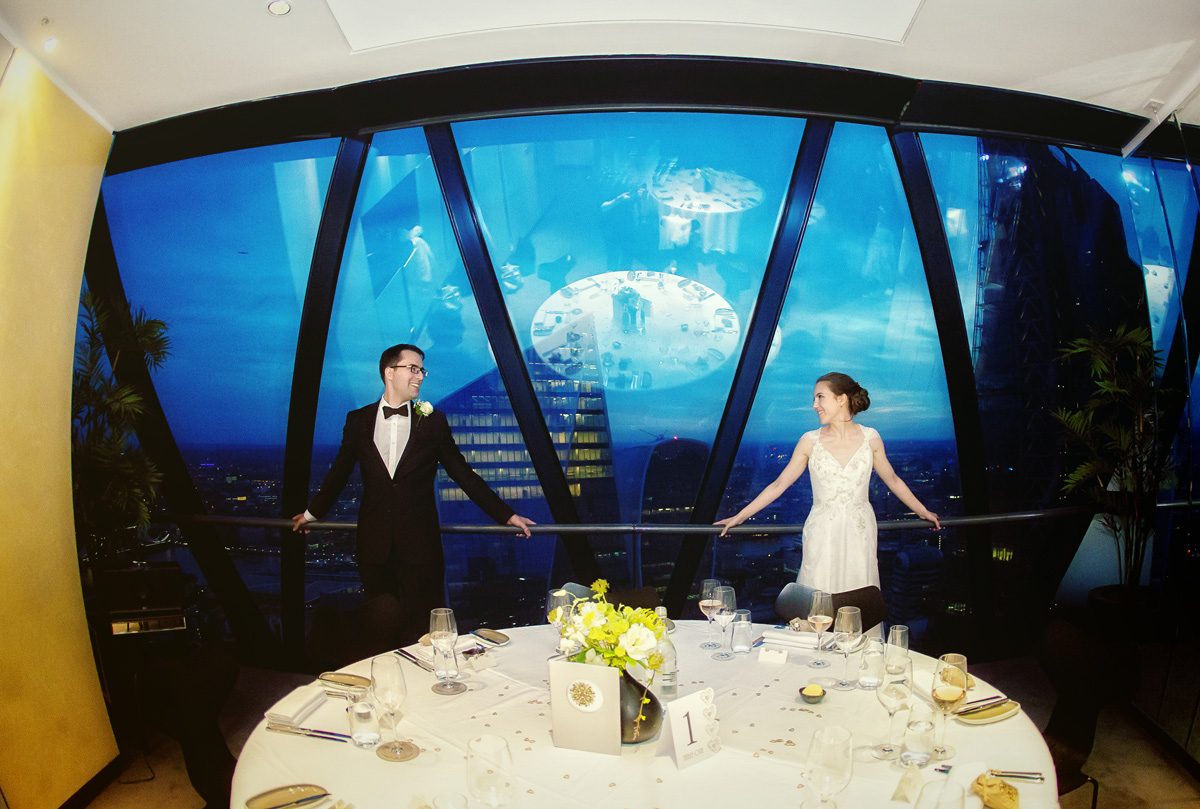 Searcy’s look after fine dining and entertainment spaces at the Gherkin so I knew the setup would be lovely.

We had a little time to take shots of S and A in the wedding breakfast room and a corridor near by before dinner was served. 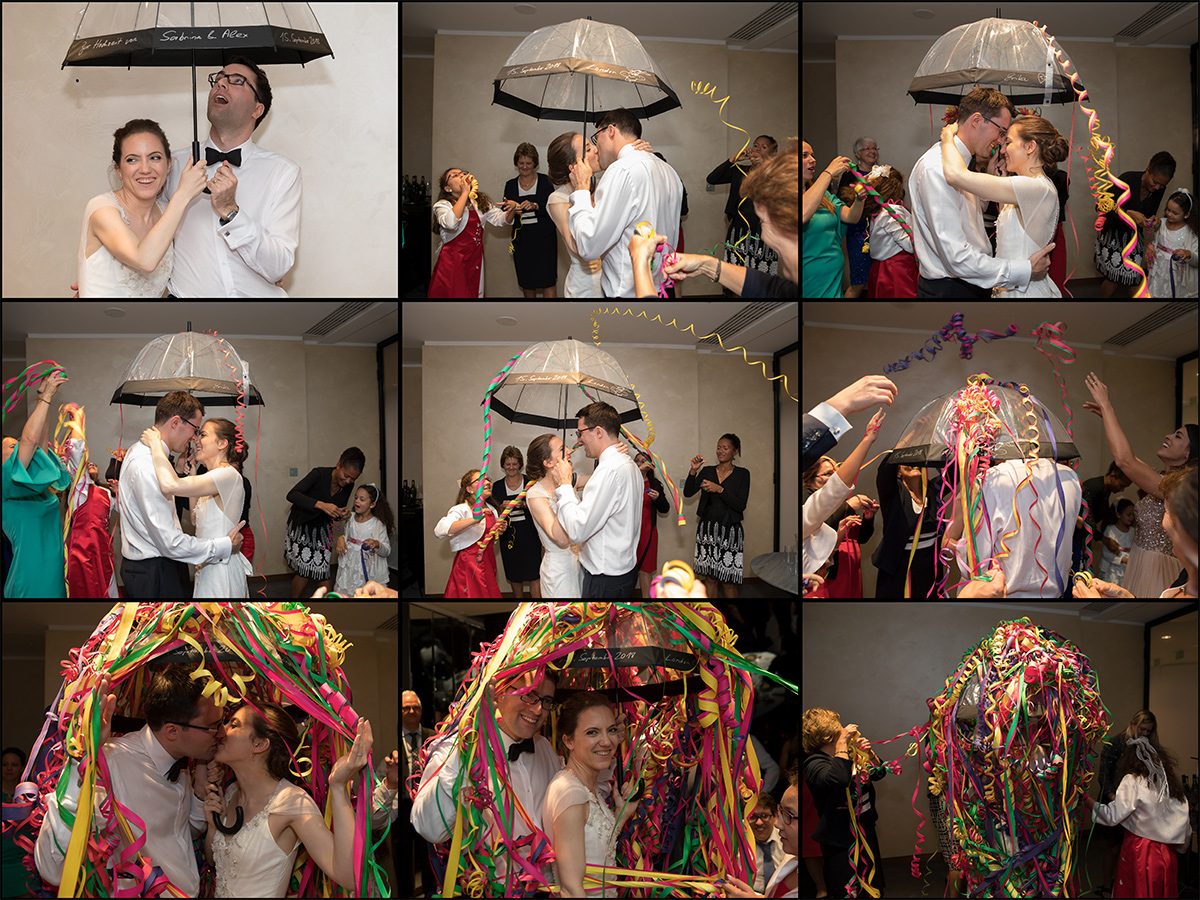 The thing about weddings at The Gherkin is that depending on the size of your wedding party and requirements, the space can be opened out or divided up. For these Swiss lovebirds, it was a more intimate affair so a room that we are used to seeing larger for ceremonies was divided into two.

After dinner it was time for speeches and cake cutting. We then witnessed a Swiss tradition we haven’t encountered before which was the couple dancing beneath an umbrella while streamers were continually thrown over them. It’s similar to Italian traditions except they don’t have the umbrella!

All in all a fantastic day from Bermondsey to St George’s Cathedral, around London in the tea bus to the Gherkin for the wedding reception.