As a London wedding photographer sooner or later you are going to be working at one of the capital’s most iconic wedding venues. That place featured in countless news articles showing the marriages of various stars of screen, music and public life is non other than Old Marylebone Town Hall. We have photographed there so many times that as I type this post, I realise we should feature some of those experiences in a series of forthcoming pieces! However, today’s article is one in our series of the “stories behind the images.” At the moment this particular wedding photo is featured on our contact page and has created a lot of positive comment from wedding couples when we have first spoken with them. This day I (David) worked on my own, because the entire wedding party consisted of just four people! Although small we all had a great and very relaxed time. I really felt part of the special moment because of the intimacy of the ceremony and our fun time together afterwards. Naturally I did the Old Marylebone Town hall wedding photographer type shots you would expect on the steps and so forth, but I also wanted to create something quirky that reflected the personalities of the people involved. I had remembered from previous wedding days there that there were some great old garage doors I liked in a street behind us. Best man was quite a macho type of guy, so I gave him the wedding bouquet to play with, and I noticed his partner the bridesmaid liked playing with her phone, so that was simple! All that was left was to use one of my “secret” tactics to get the couple reacting with each other to help tell the story and give life to the image. I took four shots of various stages of the reaction, all were quite different. All of the images “worked” but this one was my personal favourite.

Here’s a couple of other images from the day at Marylebone below:

Take a look at over one hundred images in our galleries here: Wedding Galleries 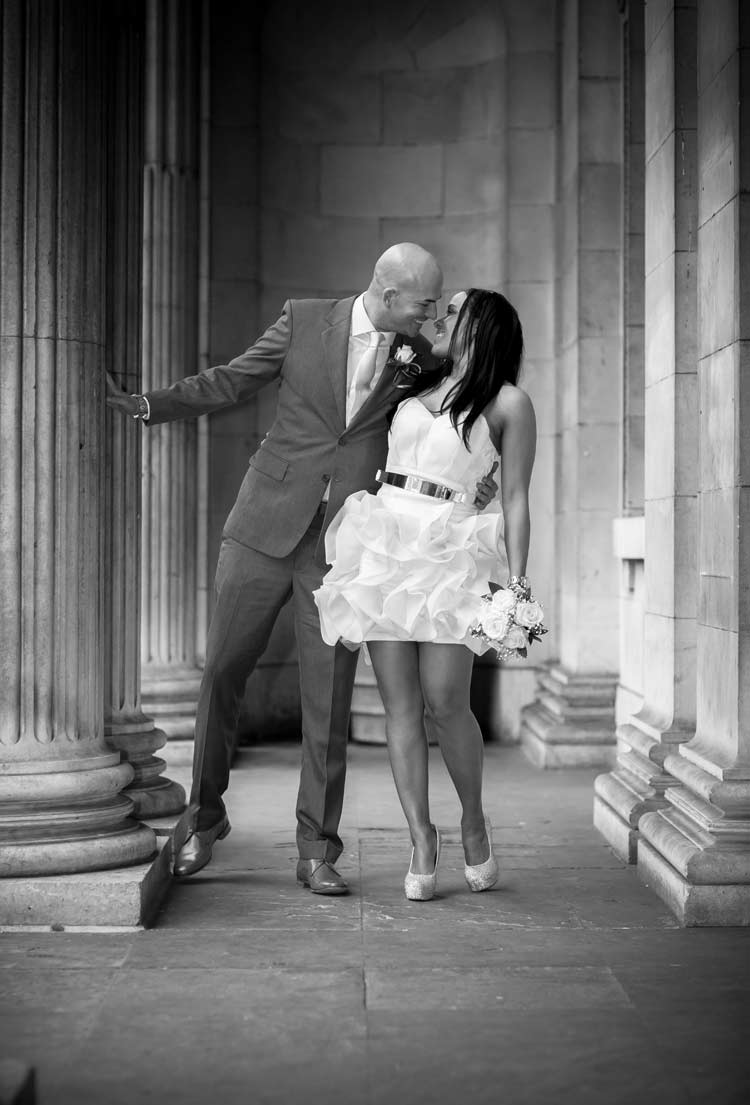 We are always interested in the background and history of the places we photograph. We make it part of our preparation for the big day as we also like to see what others have achieved or celebrated there before.

The design of old Marylebone Town hall was actually the result of a competition held in 1911 and won by Sir Edwin Cooper. Built using Portland stone it was completed between 1914 and 1920.

As well as conducting the usual civic business one would expect of a town hall, it is it’s use as a grand and varied  registry office in the heart of London that has made it so famous around the world. Paul and Linda McCartney were married here, Ringo from the Beatles, Liam Gallagher and Patsy Kensit and countless other “A” list starts including every couple that we have photographed there!

Not to put you off but it is the capital’s busiest wedding venue with as many as twelve weddings and civil partnerships on a peak season Saturday. Still it feels special every time we work there and long may that continue.